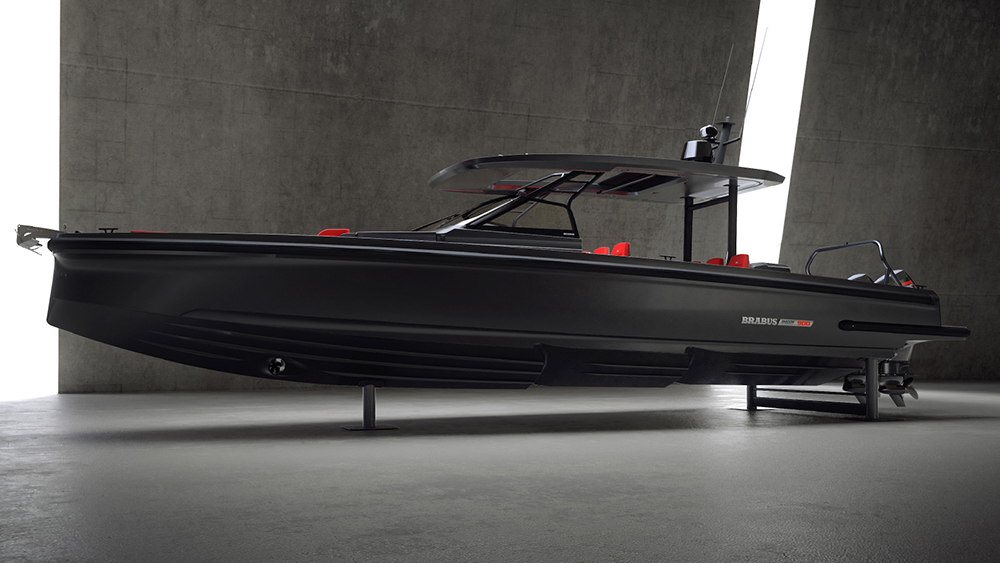 The menacing gunmetal cruiser, known as the Shadow 900 Black Ops Boat, looks as though it’s come straight from Batman’s secret lair and has the superpowers to match.

Packed with twin 450 hp outboard engines, the speedster is capable of cutting through the seas at a blistering 60 knots and its engine’s power-to-weight ratio represents the best in class. In fact, these motors tip the scale at just 705 lbs—some 300 lbs less than competing models—which gives the svelte vessel 40 percent more torque than its competitors.

In keeping with the rest of the Shadow range—yep, there are five different versions of this dark dream machine—the Blacks Ops model features a sleek, aerodynamic V-shaped hull that Brabus has refined through research and physical sea-trials.

Limited to just 37 examples, each Black Ops boat is handcrafted via a highly labor-intensive process. From fairing to painting and polishing, absolutely no automation is involved. Of course, this painstaking work more than pays off, and every inch of the boat screams precision.

The vessel is available in Sun-Top and Spyder versions and is finished in an eye-catching gunmetal gray and red color scheme. Onboard, there’s room for 10 seafarers and you have the option to add an aft cabin, a forward cabin with sleeping room for two, and/or a wet bar package.

If you’re wondering how Brabus managed to turn out such an impressive vessel, it had help. Since 2017, it’s been exploring all things marine with award-winning Finnish boat builder Axopar. The two companies have united in the extreme and managed to fuse artful Scandinavian design with cutting-edge German engineering. And may they continue to make many more supremely exciting boats.

Check out more photos of the vessel below: