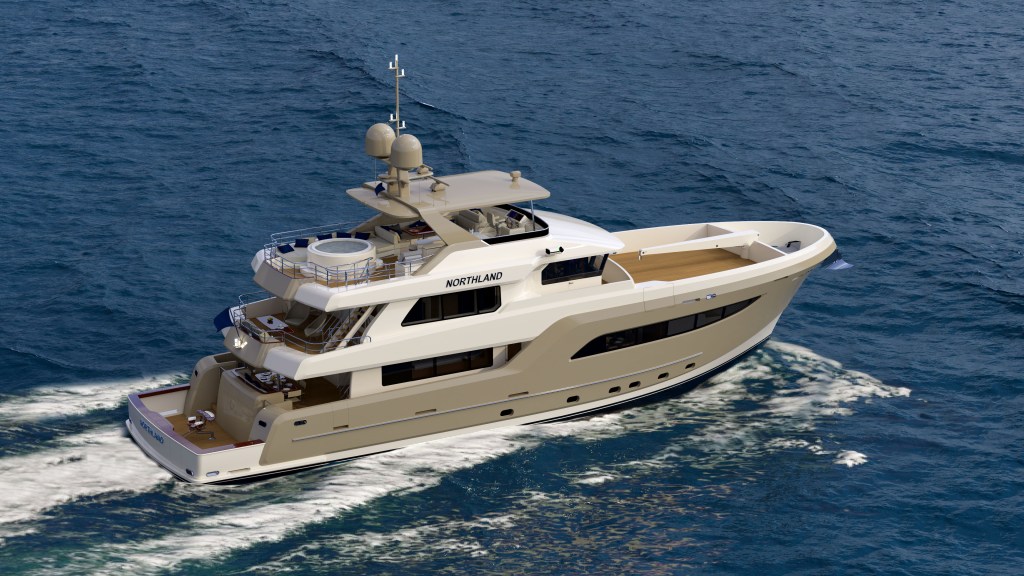 The beauty of custom yachts is that an owner can have any design he or she wants. The American owner of 103-foot Northland, recently launched by Burger Boat in Wisconsin, wanted an expedition yacht that would travel in comfort anywhere in the world. But he also wanted to engage his passion, sport fishing from the stern.  “Typically, a yacht this size would have a garage and beach club at the back,” says Luiz de Basto, who designed both the exterior and interior of Northland. “Instead, we moved the tender to the foredeck and designed the transom around fishing.” The stern, in fact, has outriggers, bait wells, fish boxes, and even a fighting chair for battling big game fish like marlin or tuna. It looks like it could be on any offshore fishing battlewagon.

But Northland’s forward section looks like a traditional explorer yacht, with a raised bow, high, protected bulwarks along the sides, and a raised pilothouse for excellent navigational visibility. Miami-based De Basto paid particular attention to comfort in Northland’s design, creating an unusually large flybridge with a hardtop, Jacuzzi, outdoor eating areas, and bar.

The master suite is on the same deck as the raised pilothouse, leaving the main deck below free for a saloon, dining area, and a library in the forward section.  Photo: Courtesy Burger Boat

“The interior is also very different than what you find on most superyachts,” he says. “The master suite is on the same deck as the raised pilothouse, leaving the main deck below free for a saloon, dining area, and a library in the forward section.” Private by day, the vast, full-beam library becomes a social area at night, transitioning into a surround-sound cinema.

Belowdecks are four guest staterooms, separated by a bulkhead from the crew quarters forward. “We made certain to keep the paths of the crew and guests very separate,” says De Basto. “The crew, for instance, enter the guest quarters via the laundry room. Everything has been designed to be luxurious and comfortable but also very functional.”

Northland is the first steel-hulled vessel Burger has built in nearly a half-century. The yard did a magnificent job with both the hull and interior fit and finish.  This Burger is powered by twin Caterpillar C18 ACRET diesel engines, reaching a top end of 12.4 knots. At 9.5 knots, its range extends to 4,000 nautical miles. Northland was built to ABS +A1 Yachting Service AMS classification.