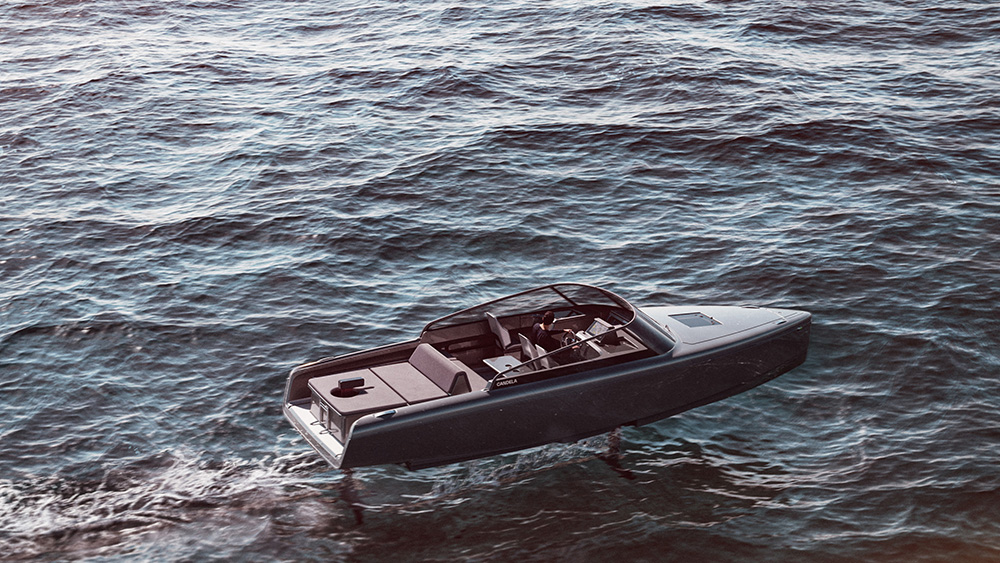 If Candela’s first electric foiling boat was considered the Tesla Roadster of the seas, its newest launch is the Model S.

The new 28-footer, which has been christened the C-8, was revealed by the Swedish outfit Thursday as the bigger and better successor to the C-7.

The first-generation C-7, which debuted last year, was one helluva disruptive e-boat but was never intended for mass production. In fact, the company has sold just 30 models to date. The C-8, on the other hand, has been designed to appeal to a broader market, sell in the thousands and ultimately contend with traditional diesel- or gas-powered speedboats in the premium 28-29 foot class.

Like its predecessor, the C-8 is designed for high-speed cruising sans emissions, bumps or noise. It features a sleek, carbon-fiber hull that Candela claims is much more efficient than that of a traditional planing boat. Not to mention, it looks good, too. The C-8 is also fitted with a next-gen hydrofoil system with an improved sensor suite and avionics. Essentially, this allows the C-8 to soar above waves with less drag and more speed than conventional vessels.

The retractable foils and electric motor extend out when the C-8 reaches a speed of 16 knots and adjust in real-time to ensure a smooth, perfectly level flight even in choppy waters. Think of it as the polar opposite of a bouncing speedboat. According to Candela, the C-8 can reach up to 30 knots at full tilt. The foils can also be retracted if you wish to use the C-8 like a “normal” boat.

As for range, the C-8 can cover some 50 nautical miles while foiling. Candela says this is the longest range offered by any electric boat. It’s also fitted with a 44 kWh battery pack that can be recharged relatively quickly in around two hours. This makes the C-8 95 percent cheaper to drive than boats that run on gasoline or diesel, according to Candela. It also reportedly has “no maintenance costs.”

Onboard, the C-8 is much roomier than the C-7 and features a large cockpit that can accommodate eight seafarers. Primed for relaxation, it’s fitted with a sunbed, a comfy sofa and three front-facing sculpted chairs, along with a premium audio system for the obligatory ocean tunes. Below deck, the vessel sports a spacious front cabin that can sleep two adults and two kids, as well as a bathroom with a shower. The C-8 also comes in an optional hardtop version if you require protection from the sun or colder climates.

The C-8 is fitted with a sizable sunbed.  Candela

Similar to a Tesla, the C-8 is equipped with an autopilot system to keep itself on course and a large 15.4-inch touchscreen for navigation. It also runs over-the-air updates to ensure it stays at the bleeding edge.

The Candela team is hoping for what it describes as an “iPhone moment for boats.” In other words, a revolutionary design that breaks into the mainstream.

The C-8 is 95 percent cheaper to drive than boats that run on gasoline or diesel.  Candela

“We aim to sell thousands of C-8, and we think it will be the first electric boat that has the potential to outsell combustion engine boats in the premium class,” Candela’s PR and communications manager Mikael Mahlberg said in a statement.