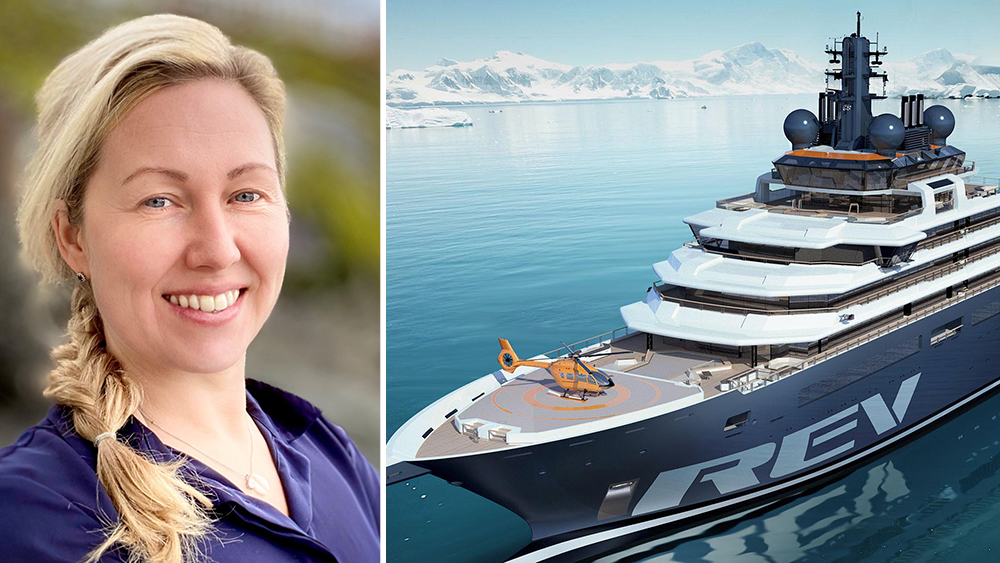 Elin Signe Askvik has always been connected to the sea: Her first job  was on a cargo carrier, then came Arctic exploration and finally a decade of salvaging wrecks in pirate-infested waters. A personal favorite: a 2013 expedition, financed by Amazon’s Jeff Bezos, to recover Apollo 11’s F-1 rocket engine, which had been jettisoned into the sea 44 years earlier. Skippering REV Ocean, the world’s largest yacht, will be a sea change. But Askvik will be using familiar technology to scan and map the oceans down to 20,000 feet, in a bid to save them.

Norway is known for its explorers. Did you grow up around boats?

I grew up by a fjord named Osterfjorden north of Bergen Norway’s west coast. My Dad owned a small bulk carrier that he made a living from, and my brother and I spent all the time we could onboard during our youth. Dad taught us the value of working and not just dreaming. A good balance.

Did you attend a marine academy in Norway?

I went to maritime school on the west coast of Norway, focusing the first year on fisheries. Then I transferred to the standard merchant maritime school. I chose the second school because it was a year shorter than the alternative. That meant I could go to sea sooner.

At 600 feet, Rev Ocean is considered the world’s largest superyacht, but much of the interior will consist of labs, underwater exploration equipment and conference rooms for scientists who undertake research missions.  Oceanco

Can you talk a little bit about your experience at Swire Seabed AS and your ultra-deepwater marine work?

In Swire Seabed, we made history by not only exploring, but also working at ultra-deepwater, down to 20,000 feet. Swire started as a one-person company with a passion for shipwrecks and salvaging of cargo. Over the years, we gained a reputation for deep-water work. In the latter years, years we had a close cooperation with Ocean Infinity, which specializes in both unmanned surface vehicles and autonomous underwater vehicle operations.

You specialized in remote underwater vehicles. Was that for oil or natural gas exploration or salvaging?

It was all kinds of work, including commercial oil, gas and mineral industry. We even recovered the Apollo 11 F-1 engine. Still, as we developed a certain track record in both searching for lost vessels and more so salvaging cargo, we did quite a few of these kinds of projects. That’s where I found my passion for sub-sea exploration in general, and archaeology/wrecks in particular.

There’s some controversy about some of these recoveries on historic wrecks, correct?

History is a treasure in itself, and what is at the bottom of the sea should be documented first of all, but also recovered before it deteriorates. It’s great diving in to sub-sea museums at thousands of feet, but not everybody can do that. Respecting history can also be about making it available to the world before it’s gone. We also took part in searches where not only the vessel was missing, but also its crew. That may sound distressing, but I found it rewarding. We potentially helped find answers for people who had lost loved ones at sea. That was the greatest honor of the job.

The vessel will be capable of spending long periods at sea without refueling and can store enough food to feed 90 people for 114 days. Rev Ocean also has some of the most advanced water-waste and recycling systems of any superyacht.  Rev Ocean

All that is very different from being captain of the world’s largest superyacht.

The earlier years made me aware of the changing state of the oceans and why I’m at REV Ocean. I saw the bottom of the Mediterranean last year, some 6,500 feet below the surface. There was not a fish in sight, but an enormous amount of garbage. The coast of Africa, the middle of the Indian Ocean, everywhere it’s the same. The results of the stress we put on the ocean is downright scary. We still don’t understand the ultimate consequences.

I’m assuming your duties will include underwater exploration?

My background fits for doing sub-sea exploration in undiscovered areas, and gain knowledge about what we don’t know. To gain understanding that can be shared with the world. We can ultimately contribute to the solutions to challenges of the blue environment and humanity face. Grand words, but we need to be grand to get the attention the ocean needs.

The hull and decks were completed earlier this year and now the interior will take two years to complete. It will be delivered to its owner in 2022.  GUILLAUME PLISSON

What kinds of vehicles will you have?

We will have a range of sensors on the mothership, basically to do a health check on the oceans. We will also have an advanced system for research trawling and coring equipment for samples. An ROV to inspect, and take samples. The autonomous underwater vehicle to survey larger areas. We will also have a manned submarine to see the magic of the undersea world–for research and joy. It’s a mesmerizing place.

The fact that I get to take part in something that matters for the future, something that can make a difference for the ocean, for the environment, and thereby for human beings – not just for the economy or one company. That excites me. It’s like owner Kjell Inge Røkke has said: He wants to give back to the ocean that he has made a living from. I can identify with that philosophy.

After the hull was completed, Rev Ocean was moved to a new facility in Norway for completing its complex interior.  Rev Ocean

What are you most hopeful about?

By asking the questions, we are on our way to finding answers. Answers that will increase the global understanding for the ocean’s state and our impact on it. I honestly believe that understanding is what will start the real change that’s needed. Locally and globally.

Are there any planned missions that you’re excited about?

Before starting in REV Ocean, one of the things I found really interesting was that any researcher can get the chance to come onboard the vessel and use all our equipment for free for research they think is important. No  big money needed – just curiosity, enthusiasm, and a purpose. I look forward to meeting all those dedicated, compassionate researchers. And then sharing this with the world. Every mission will be a good one.