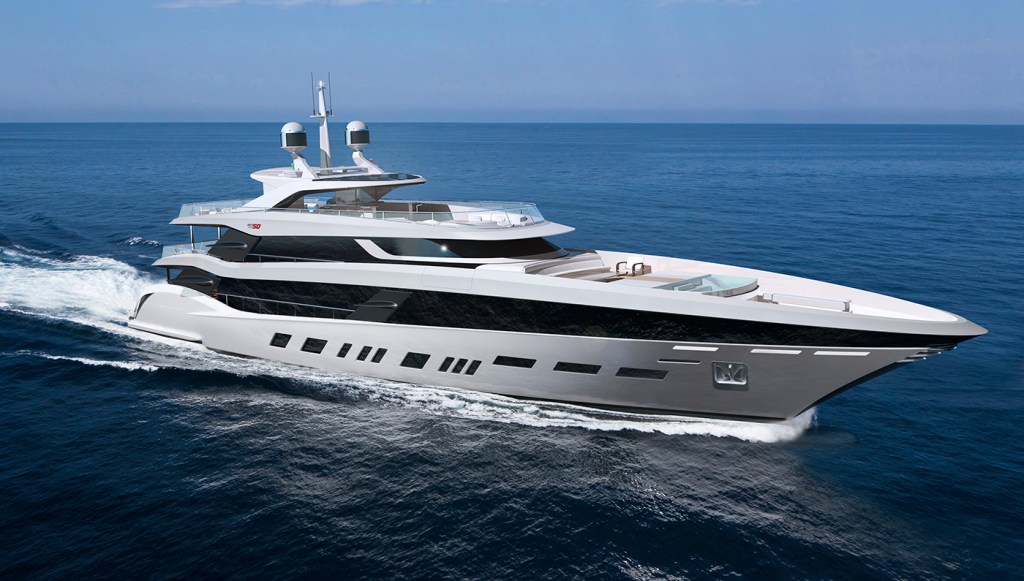 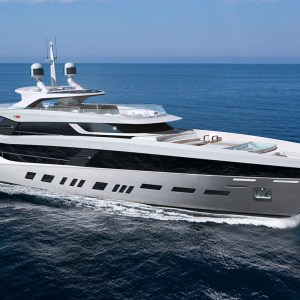 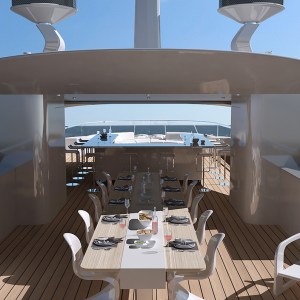 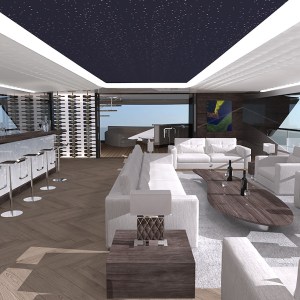 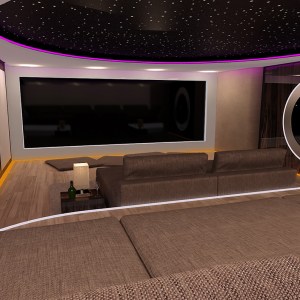 Renowned for his automotive acumen, Henrik Fisker—who just launched the Fisker Force 1 supercar—has recently drawn upon his versatile design skills to collaborate with Benetti Yachts on the Benetti Fisker 50 concept. The 164-foot luxury craft pairs the Italian boatbuilder’s nautical flair with Fisker’s own signature expressions of form and function.

RobbReport.com recently spoke with Fisker about his nascent nautical sensibilities, the dichotomies and commonalities in car and yacht conception, and how this project could present a new design language for the latter.

You are known for your automotive artistry, but what is your background with yacht design?

To be honest, I have not had too much experience with yacht design except for one I came up with as a school project 20 years ago. But I think that is probably one of the reasons why Benetti wanted to do a joint venture with me: They were looking for somebody who was thinking out of the box and would change some of the formalities and conventions currently in place within the industry. If they were just looking for another yacht designer, they wouldn’t need me.

How did your collaboration with Benetti come about?

I had met James Clayton, the sales manager for Benetti, at several events, and he had sold yachts to many of my friends. We were hanging out one evening discussing how yachts are used and the future of the market, and I mentioned that it would be fun to design one. He took me up on it and we met with the CEO of Benetti who expressed that the company was looking to create the next big change. But, as with the car industry, many amazing concepts never actually materialize, so we wanted to come up with one that was feasible and would actually be built. The challenge was to do more than just throw another concept out there, but to imagine an innovative and unique design that would go from rendering to reality.

Benetti is known to work mostly with designers from Italy. Did you adopt some of the Italian aesthetic for this project?

Benetti is a 100-percent Italian company that is known for its elegant, sporty, and sleek presentations. As a designer, you have to embrace the brand and understand what it is about without getting stuck in its current framework. I definitely needed to incorporate Italian flair, and Benetti has existing design elements that I wanted to bring to the next level. For example, one common thread in Benetti’s yachts is the very long, thin black line that runs all the way around the hull, so I made it more pronounced and integrated it with the window area. I also incorporated a bit of the Fisker style, specifically seen aft where the yacht has a haunch like that of a sports car. The feature resembles a wave and contains considerable sculpture, which is one of my signatures. I added that to really differentiate the Benetti Fisker 50 from any other yacht in its size class, as most over 150 feet in length start becoming square and resemble floating apartment complexes. I wanted to give the yacht a sleek and beautiful appearance, despite the fact that it is 164 feet long and has three decks.

How do your pillar principles of design apply to the Benetti Fisker 50 concept?

Yachts typically do not have the same amount of sculpture that cars contain, so I wanted to add a lot of sculptural development and play with the way light hits various shapes and surfaces. I created a prominent line that flows from the front through the sides of the hull and decks then sweeps up to the rear hip. I gave it a ripple effect, which is quite unusual. The yacht also has a very strong graphic element enhanced by the black windows running through the entire superstructure and the black, polished carbon-fiber panels used for support. At the stern of the top deck I have emphasized the panoramic view by incorporating glass railings to eliminate obstruction when lounging and give it the feel of an open deck. Had I wanted to achieve that effect with normal approaches, I would have had to cut out the windows and that would have looked ugly, in my opinion. The whole yacht flows with the theme of uninterrupted ocean views as much as possible.

Did you design the interiors as well?

Yes, I did. My idea for the interior was to give the feel of a lavish penthouse apartment in, say, New York, London, or Paris. Many owners of a yacht this size live on board, entertain, and offer it as a charter, so I designed the innovative layout with those three elements in mind. The interiors had to have that homey feel for a couple, accommodate up to 12 guests, and easily handle parties with a hundred people in attendance. The latter is one of the most difficult challenges, as you have to optimize group flow on the stairs and between cocktail bars and other onboard venues.  I did not want it to feel condensed and tight. I also felt it was important to introduce one-of-a-kind features that would add to the air of luxury, such as the floating fireplace in the master bedroom, as well as the fold-out terrace where you can soak up the ambience of St. Tropez, the Bahamas, or wherever you are in the world. I have designed the interior spaces to be places an owner would want to live in and not just sleep in.

What did you find most challenging about the transition from automotive design to yachts?

In car design you can always go to a full-size clay model and correct the lines. Obviously, with a 164-foot yacht everything has to happen virtually, which was a big change for me. You also have to start with a hull that is absolutely correct, as far as the right proportions and sailing ability. Fortunately, Benetti had already created a perfect hull, so I just worked up from there. Another big difference is that once inside a car there is no real passenger movement whereas with a yacht you have to consider the dynamics of interior motion and make it comfortable for everyone—from two people out for a quiet week away to 150 guests having a wild party, and that is a huge span of usability.

What element of the Benetti Fisker 50 stands out as especially significant to your signature style?

I believe that if you can create very simple yet beautiful designs, there is a good chance they will become timeless. And it dawned on me that there is probably no other possession in the world that you would want that to hold true for more than a yacht, due to the gigantic investment. There are many different design languages happening in the yacht world, and I wanted to clean that up and make a pure, simple statement. The clean line that runs from the front and kicks over the rear hip is what I hope becomes instantly recognizable with the Benetti Fisker 50. Another element that comes from my background in the car industry is what I liken to a grille. Unlike automobiles, most yachts coming into a harbor are not distinguishable by brand, especially from the front. I created three stainless-steel bars complemented by carbon fiber as grillwork that runs from the top of the bow to the waterline. It will be a very recognizable design cue. Lastly, like a supercar, yachts elicit an emotional connection when seen, and I wanted to deliver that “wow” effect by developing dramatic tension in its lines, something unexpected in a yacht of this size. I want the little kid who sees the Benetti Fisker 50 for the first time to say, “I want one of those.”

What do you see as far as your future involvement with Benetti and yacht design in general?

As far as my continued involvement with Benetti, it has not been decided how many of the Benetti Fisker 50 yachts will be produced, but I will be included throughout the process. We designed the yacht with the car industry’s platform-sharing strategy in mind so several could be quickly constructed. A significant advantage is that we can build each one in as fast as 18 months, instead of the two or three years it normally takes. Having a shared platform that consists of the hull and other structural elements is not only efficient but allows more money to be spent on exotic materials and interior amenities.

When it comes to yacht design in general, my participation will depend on how much time I have between all of my other projects; but it is definitely something I find exciting, especially when looking into new technologies. One of the components I talk about with Benetti is hybrid power trains, which will be offered for this yacht, as well as the use of solar panels similar to what I pioneered on the Fisker Karma. I also think the next big thing for the industry is connectivity in both safety and entertainment, so we will incorporate many of those advancements as well.

Is there a date to begin building the first one?

We are currently negotiating with a couple of potential clients for the first one but can build two simultaneously and should be able to start in the next three months.