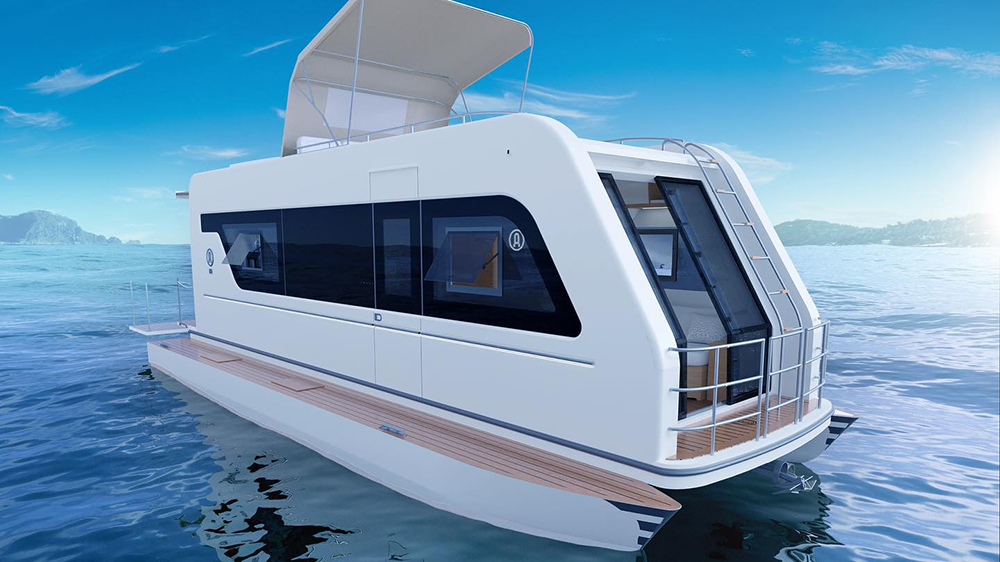 The Caracat electric catamaran is so much more than just a watercraft.

That’s because the vessel, which is made by the German company of the same name, can easily be transformed into a dedicated camper. It’s packed with all the things you need to stay out on the water having a good time—even after the sun goes down.

The Caracat has a patented design that includes two pontoons that swing out or retract. This feature allows you to use the battery-powered craft in one of three ways: as a dedicated camper when towed atop a standard boat trailer, as a catamaran and as a floating camper. You won’t find many more versatile catamarans or campers.

The vessel’s design doesn’t scream out at you, but its GRP hull is sleek and modern. What really sets it apart are the amenities, though. Inside the elegant, teak-floored cabin, which stretches 28.2 feet from bow to stern, you’ll find two elegant sofa lounges. They’re split by a bathroom, which features a shower, toilet and sink, while the rear entertainment area has a galley with a diesel-electric cooktop, microwave, fridge, sink and cooler. Both lounges can be converted to sleeping areas when you’re ready to call it a night, whether you’re on land or water. The boat can sleep four adults, though a roof-mounted pop-up tent boosts capacity to six. There’s also a Dometic heating and A/C unit for days when the weather isn’t perfect, as well as an entertainment system that includes a retractable LED smart TV and a Bluetooth audio setup.

With its pontoons swung out, the catamaran has a width of 12.1 feet, as opposed to 8.2 when retracted. The added width gives the craft more stability out on the water. It is also equipped with an 8 hp Torqueedo electric motor that is connected to a 44.4-volt battery pack. The motor isn’t the most robust, but it’s good for a relaxing ride around a lake and was designed to operate cleanly and quietly. You can swap the powertrain if you need more oomph, though.

Caracat has yet to announce pricing for its watercraft, but you can reach out to the company through its website if you’re interested. We don’t imagine it will be cheap, but at the same time, you’re getting a catamaran and a camper.

Click here to see all the photos of Caracat’s catamaran camper.