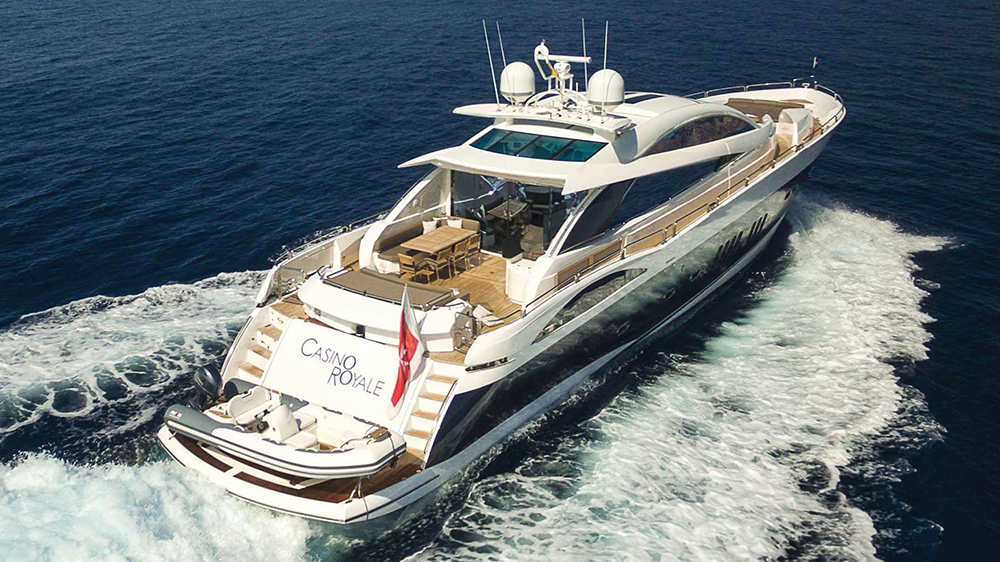 If you’re a mariner who doubles as a James Bond fan, we have the boat for you. The 108-foot Sunseeker Predator—which appeared in the 2006 adaptation of Ian Fleming’s Casino Royale—is now available for charter with Camper & Nicholsons for a cool $72,000 (€65,000) per week.

The luxury cruiser—which takes the same name as the movie—made an on-screen splash as the hideout of the supervillain Le Chiffre (played by the menacing Mads Mikkelsen). Casino Royale was first delivered back in 2004 by British shipyard Sunseeker and was refitted in 2016 for approximately $1.3 million (€1.5 million). Today, the superyacht has as much star power, grunt and good looks as the film’s leading man, Daniel Craig.

Powered by three 2,000hp MTU diesel engines linked to Arneson surface drives, the sporty vessel can cut through the sea at a maximum speed of 45 knots—perfect for evading pesky secret agents—and cruises comfortably at anywhere between 30 to 33 knots. She has a narrow hull—finished in a nautical navy blue—and is both graceful and agile in the water.

Casino Royale as it appeared in the 2006 film.  Youtube

Inside, Casino Royale has a generous open-plan layout. She can sleep eight guests in four cabins—one master suite, two twin guest cabins and a VIP suite—plus there’s accommodation for four crew (or henchman). Each room is appointed with an entertainment center, TV and en-suite bathroom, and the master suite has a massive walk-in wardrobe, as well as a study.

Paneled in satin cherry wood, the main salon features a retractable sunroof above the dining area which allows for swathes of natural light. While on the main deck, there’s a jacuzzi, an alfresco lounge area and bar—to order that martini (wait for it) shaken, not stirred.

When you’re not busy working on your next evil ploy, the superyacht has a bunch of water toys, such as stand-up paddleboards, water skis, snorkeling gear, inflatable towables and a Sea-Doo.

Casino Royale is currently docked in the Mediterranean Sea waiting patiently for your next escape.