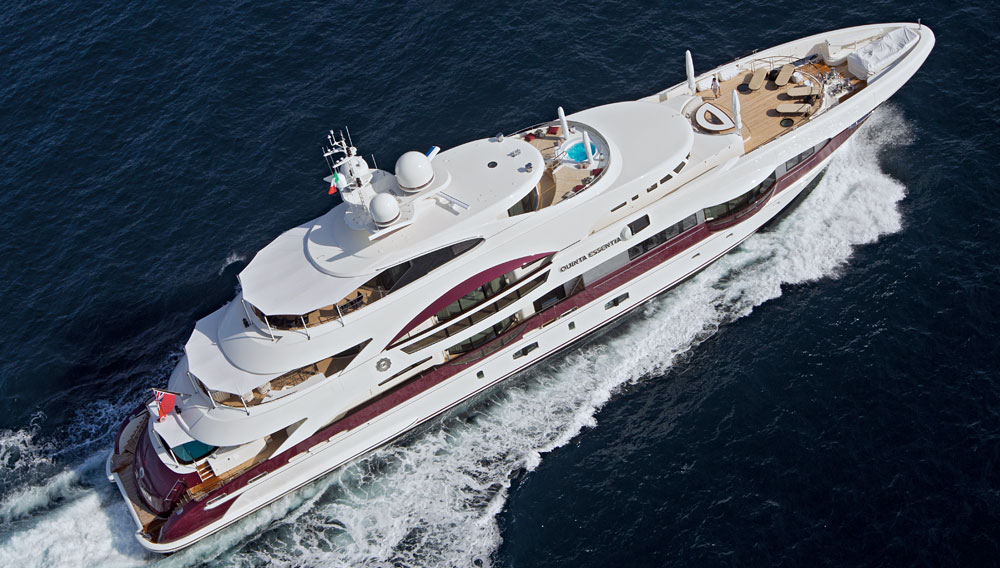 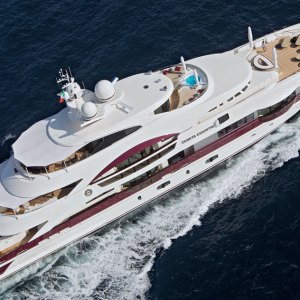 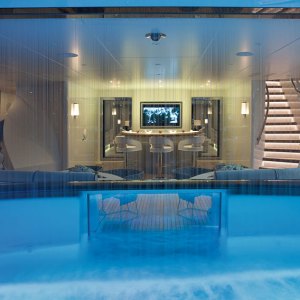 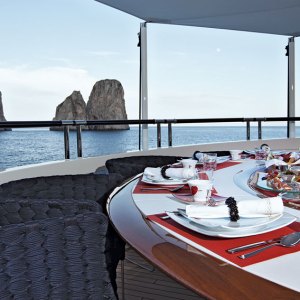 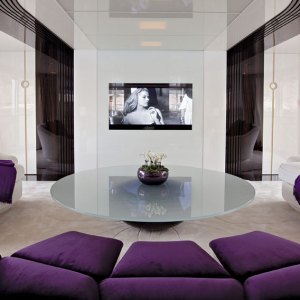 Despite stormy conditions and dire forecasts in the yachting industry, the world’s top shipyards launched a flotilla of magnificent megayachts in 2011. Several of these dramatically appointed vessels recently joined the charter market, offering amenities ranging from an onboard Michelin-starred chef to a 46-foot inflatable waterslide. Of the many fine launches from the past year, the following five float to the top as Robb Report’s favorite new charter yachts for the winter and summer seasons.

QUINTA ESSENTIA. A staple of Dutch shipbuilding for more than 30 years, Heesen Yachts delivered seven boats in 2011, marking its most prolific year in a decade. Tops among the year’s launches was the 180-foot Quinta Essentia, the yard’s largest build to date.

Throughout its four-deck layout, Quinta Essentia embraces the outdoors with an open and seamless design scheme. Standing inside the third-deck salon, guests can look through a large, oval-shaped opening that stretches across the second and third levels amidships. The gap also affords uninterrupted vistas from the yacht’s promenade, the second-level main-deck salon, and the third-level sun lounge, which features a fireplace and a baby grand.

Quinta Essentia’s top two decks are ideal for alfresco dining, thanks to ample seating shaded by canvas awnings. The main deck offers a 10-person, 1,850-gallon pool that sprays a 10-foot-wide water curtain from 3,000 tiny jets. This liquid scrim separates the pool area from the bar.

On the lower deck, a door to the tender garage doubles as a spacious and easily accessible swim platform. Inside the garage are WaveRunners, Seabobs, a custom 25-foot limousine tender, and various towables.

Quinta Essentia, which is Latin for “fifth element,” is also equipped with a reinforced aluminum hull that enables the yacht to navigate the icy waters of Alaska and parts of the Arctic. This winter, however, the mighty Heesen will be found cruising the relatively warm waters of the mid-Atlantic’s Cape Verde Islands.

CRUISING AREAS: Cape Verde Islands off the northwest coast of Africa this winter Mediterranean next summr

HIGHLIGHT: A dip in the aft-deck pool, under the misty waterfall

NUMPTIA. Stepping into Numptia’s main salon is like walking into another, more glamorous world, one that Italian designer Achille Salvagni spent years creating. The yacht’s owner—who offers Numptia for charter through the London-based firm Burgess—worked almost daily with Salvagni during the three-year build process. “He wanted to be able to go through the yacht with a tuxedo or with shorts,” Salvagni says. “So we came up with an interior that would match both.”

A fluid, high-style design defines the yacht’s interiors; outdoor areas are simpler and meant not to distract from the views. Exterior spaces on the 230-foot vessel—the largest yacht built to date by the Italian yard Rossi Navi—include a 1,600-square-foot top deck that is ideal for social gatherings. In addition to a spacious tanning and lounging area that doubles as a helipad, the deck offers celestial LED ceiling lights and space to accommodate a four-piece band. The deck also features a 1,850-gallon hot tub with raised waterspouts and a slanted glass edge that faces a covered bar and seating area.

Each of Numptia’s decks is equipped with a fully stocked pantry and wine refrigerator to facilitate service to any area on the yacht. A black-glass elevator encircled by a winding set of white limestone stairs grants access to the lower four decks. Other interior highlights include televisions that appear to be mirrors until powered on, as well as Apple iPads in every room to control lighting, media, and the Kaleidescape music-and-movie library. The bridge-deck salon, with its 103-inch 3-D Panasonic television, serves as the yacht’s home theater.

Numptia also has a large gym, a sauna, a marble steam room, and a dedicated massage room. The yacht’s gullwing-door garage houses a 24-foot Colombo cruiser, a Castoldi jet tender for towing water-skiers or wakeboarders, a pair of WaveRunners, Sea-Doo and Seabob underwater scooters, kayaks, a floating bathing pool, and more. The yacht also carries full sets of dive gear and counts a certified dive master among its 18 crewmembers.

CRUISING AREAS: Caribbean in the winter Mediterranean in the summer

LADY BRITT. The Scandinavian couple who commissioned Lady Britt from Feadship had chartered the Dutch shipyard’s yachts for years. So when they committed to one of their own, they had a very specific vision. The resulting boat—a 207-foot, five-deck explorer vessel—joined the charter fleet of Monaco-based Edmiston last April.

Instead of a five-star hotel on water, Lady Britt’s owners wanted the yacht to feel like a home away from home. To that end, they filled the boat with pieces from their extensive art collection, including a painting of a dog comically rendered to resemble a van Gogh portrait.

Lady Britt’s owners also wanted the ability to take the yacht virtually anywhere in the world. The boat has already seen several harbors, including some in Russia, Sweden, and Finland, as well as in the southeastern and northeastern United States. Since hitting the charter market, Lady Britt has logged more than 20,000 nautical miles cruising from Corsica to Sardinia and throughout the Caribbean.

The yacht’s flexible layout allows for two of the six lower-deck staterooms to be converted into a single full-beam VIP suite—a convenient feature for charter parties with two principal guests. The seventh stateroom is the main-deck master suite, which feels more like an apartment than a ship cabin, replete with his and her bathrooms and dressing rooms, plus a private study. The yacht also offers a pair of main dining tables, one indoors on the main deck and one on the fourth deck for alfresco dining at sunset.

The sundeck serves as Lady Britt’s primary gathering place, with a 100-inch pull-down film screen, plug-in DJ turntables, a full bar, an eight-person Jacuzzi, and expansive sun pads both forward and aft. The yacht’s two garages are filled with water toys, including diving and fishing gear, three WaveRunners, pairs of kayaks and windsurfers, and a slew of towables to take out with one of two 23-foot sport tenders.

In addition to a drop-down swim platform at the yacht’s stern, Lady Britt features a smaller drop-down platform starboard. The boat’s many features may explain why a number of yachting-industry professionals—including Feadship CEO Henk de Vries—agree that Lady Britt is the builder’s finest launch yet.

CRUISING AREAS: Caribbean in the winter; Northern Europe and the Mediterranean in the summer

HIGHLIGHT: Enjoying the cuisine—including more than 40 flavors of ice cream—of chef Simon Jones, who helmed the kitchen at London’s L’Escargot when it earned a Michelin star in 1996

IMAGINE. Imagine is the first 215-foot yacht in Amels Holland’s Limited Editions series. Tim Heywood, the famed British naval architect, designed this line of five-deck, semicustom vessels for the Dutch yard, which delivered Imagine in March. It is now under the management of Fraser Yachts and is offered for charter as part of the company’s new Diamond Collection of ultra-high-end yachts.

With an assortment of toys and tenders—including pairs of WaveRunners and Seabobs, a Jet Ski, two large tenders for cruising and waterskiing, and a 46-foot inflatable waterslide that guests enter from the top deck—Imagine affords ample opportunities for adventure. But with an interior by English designer Andrew Winch and a staff of 15, the yacht also makes guests feel right at home.

Imagine’s main deck features a covered open-air seating area that serves as an exterior foyer to the circular main dining room, half of which opens up to the aft deck. The forward half of the dining room opens to the 1,300-square-foot main salon, creating a massive combined space with a sight line that stretches from the salon to the stern.

The yacht’s three-part sundeck includes an alfresco dining area aft. Amidships are a gym, a steam room, and a large circular ceiling window. At the forwardmost point, an inviting outdoor space features a 2,600-gallon pool, a swim-up bar, a separate six-person hot tub, and a wraparound sun pad.

CRUISING AREAS: Caribbean in the winter; western Mediterranean in the summer

YOGI. Any discussion of the 198-foot yacht Yogi must begin with the yacht’s pool. The 3,000-gallon overflow pool stretches nearly the length of the main deck’s 30-foot beam aft. Water from the pool cascades over a glass-walled edge just above the yacht’s logo at the stern. Just below, a garage door folds down to become a 160-square-foot beach deck over the sea, complete with a full bar and lounging area forward of the platform—which swimmers can look down on through a circular glass window set into the bottom of the pool.

Yogi, which joined the Burgess charter fleet last summer, counts a masseuse-and-aesthetician among its 15-member crew. The vessel’s water toys include motorized surfboards, Sea-Doo and Seabob underwater scooters, and snorkeling gear. Yogi also tows a 36-foot powerboat, and the yacht’s starboard deck folds down to offer access to a 14-foot Novurania tender or twin WaveRunners, which launch from the main-deck bow via a mechanical crane.

CRUISING AREAS: Caribbean in the winter Mediterranean in the summer

HIGHLIGHT: Hopping between Caribbean islands on the 36-foot triple-engine powerboat from Donzi Marine