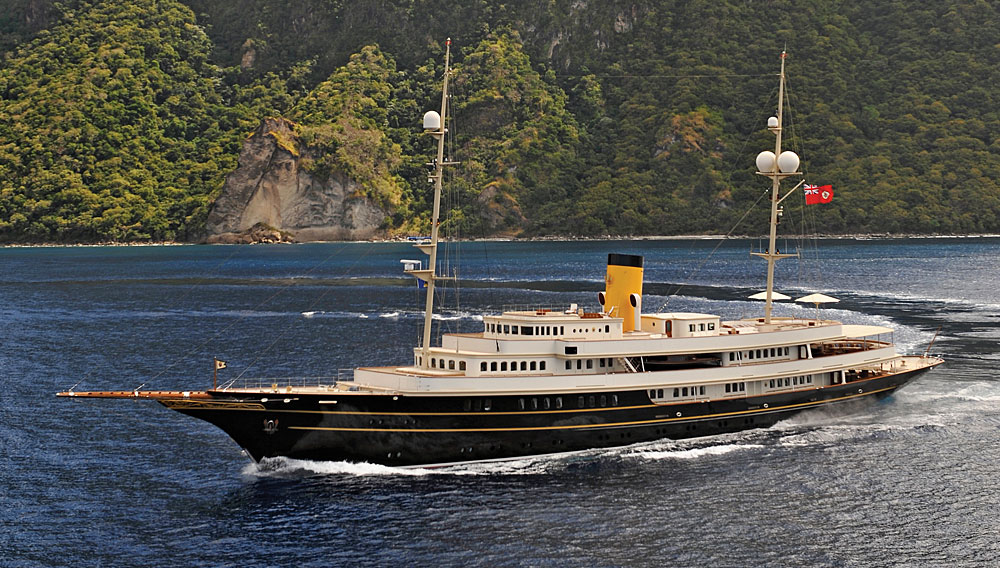 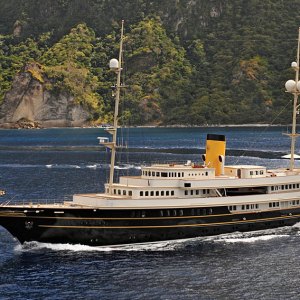 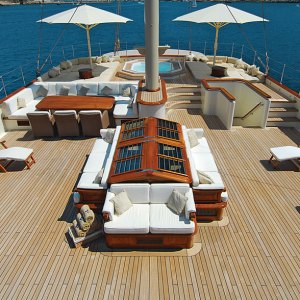 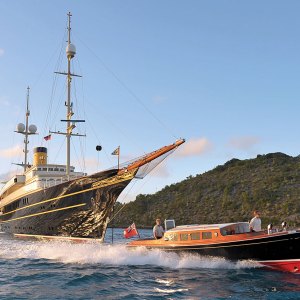 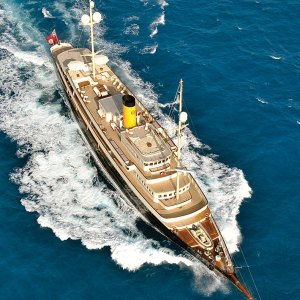 Several years ago, a British businessman went looking for an older yacht to restore. He loved the classics from the early 20th century, and as a self-described “boat nut” he relished the thought of bringing one back to its original grandeur. “Frankly, there was not much left that was viable for restoration,” he says. “There were a couple of potential projects from the 1920s, but they were absolutely terrifying in scale.”

Unable to find a suitable candidate for resuscitation, the businessman decided to build a new yacht instead—one that would look and feel like a classic. He would call the boat Nero and construct it to the most exacting specifications. Yet this idea quickly became like a colicky infant that could not find comfort. The businessman spoke with designer after designer, yet failed to find one who shared his vision. Many proposed what he calls “Walt Disney” versions of a classic motor yacht, which, he felt, would be embarrassing. Several yacht builders in Europe refused to bend their processes sufficiently to accommodate his wishes. Details such as the amount of space between each deck became deal-breakers. The shipyards wanted broader, modern spacing for pipes and fittings while the businessman wanted less space—utilized perfectly—to maintain the look of a 1920s yacht. “The challenge was getting the design, down to every pipe, worked up in 3-D before we started building,” he says. “The European yards wanted to build what they build. They call their boats custom, but they’re actually pretty formulaic under the skin.”

To make Nero the yacht he wanted it to be, the businessman had to strike out on his own and design it himself. He put together a team of about 30 experts in boat design and construction. He then struck a deal with China’s Yantai Raffles yard, a builder of offshore rigs and other industrial vessels, in which he would oversee Nero’s construction. “They had absolutely no idea how to build a yacht, but they had an amazing facility with fantastic equipment and machinery,” he says. “We started our own corporation within their facility, with access to their labor force, but managed by our own team. I call the company Corsair Yachts.”

When construction began in mid-2004, few people in the global yachting community knew anything about the project. The businessman intentionally kept it secret so he would not have to answer questions along the way. He was doing something that nobody else had done, in a country known more for cost-cutting than fine outfitting, and he knew the final product would speak more loudly than any words he might utter to brokers from Fort Lauderdale or Monaco. “The few brokers who knew we were building it wanted me to commit to charters early in the build process,” he recalls, “but we didn’t want anyone chartering it until we had made all the adjustments after the initial build process. We wanted it perfect.”

Nero left Yantai Raffles in October 2007 and cruised to Turkey for the final outfitting process, which lasted from February 2008 to June of that year. The yacht made its charter debut at the annual show in Saint Martin in December 2008—more than a year after launching—and it wowed the industry insiders who stepped aboard. “The owner was there, and he gave tours himself,” says charter broker Tim Nelson, who specializes in worldwide bookings of motor yachts 100 feet and larger for Florida-based Seven Seas Yacht Charters. “He was enthusiastic, and that was contagious.”

The proud owner thinks that Nero’s audiovisual system is one of the yacht’s most impressive features. The observation lounge has a theater equipped with a 98-by-55-inch screen and a 9.1 THX-approved Dolby sound system. There is also an outdoor theater with a 7.1 surround-sound setup.

The yacht’s insulation makes using the audiovisual system a pleasant experience for everyone. The owner calls the insulation “double sound,” for it is thick enough to absorb virtually any level of noise that can be cranked up on the surround-sound speakers. “The advantage of being the owner and the builder is that there’s not a constant cost-cutting problem with the yard looking to increase its margins,” he says. “Insulation is one of those areas that sometimes suffers. On Nero, in the cabins, you can turn the music up to disco-club level and you can’t hear it in the cabin right next door. We could not have done that with an older boat restoration, generally speaking. Plus, unlike on older boats, the insulation means there is absolutely no noise from systems like generators and engines.”

Another key charter feature is Nero’s side boarding-and-swim platform. Because the yacht has a classic stern shape, there is no place to put an aft swim platform. (Modern motor yachts often have platforms built directly into the hull.) On Nero, the owner—working with a British engineering company—designed an 18-foot-long platform that folds out of the yacht’s starboard side, which offers easy water access without marring the boat’s traditional profile. There is also a swimming pool along with Naiad at-anchor stabilizers and a 31-foot tender that the owner custom-designed in the style of a 1920s American commuter yacht.

Nero’s cabins accommodate 12 charter guests and 20 crew members. The spaces onboard are designed to feel small and cozy, despite the yacht’s being one of the largest available for charter in the world. “It wasn’t built as a charter boat,” the owner says. “It was built as the most beautiful boat that it could be, with the hope that it would appeal to charterers. I’ve designed the plates, the door handles, the hinges. I did the computer-assisted design drawings, all the styling. I did the graphics on the hi-fi systems. I’m now doing the photography on the interior. It’s been my absolute passion for eight years. I have micromanaged it, and at the end of the day, love it or hate it, it’s my creation.”

And what a creation it is. Among charter yachts, Nero is one of a kind. “The way I feel about it is that the only yachts everyone loves—sailing- and motor-yacht people alike—are the classics from the 1920s,” the owner says. “When one arrives, everyone stops and says, ‘Wow, isn’t it gorgeous.’ That’s what we’ve tried to achieve, but with the most modern systems and amenities.”