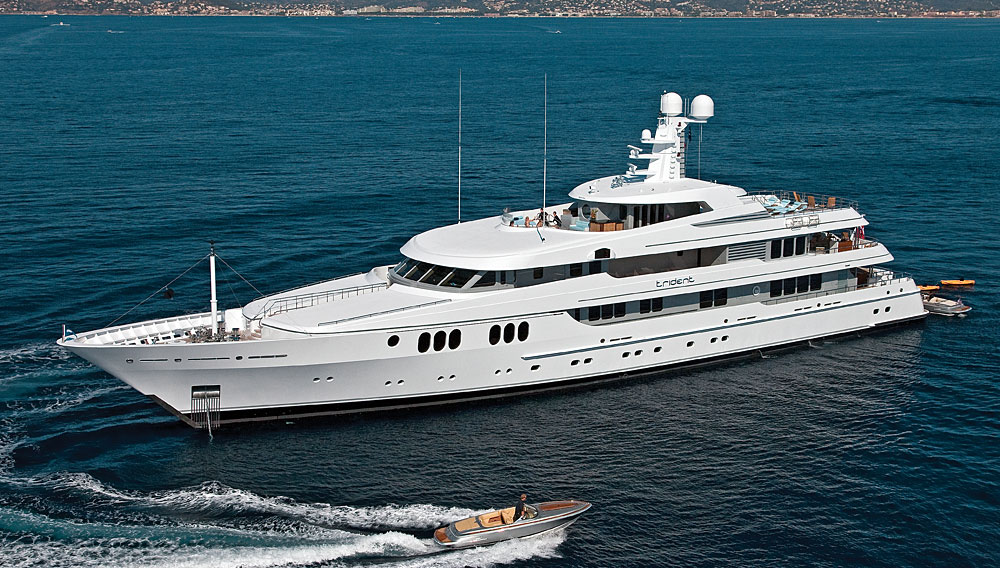 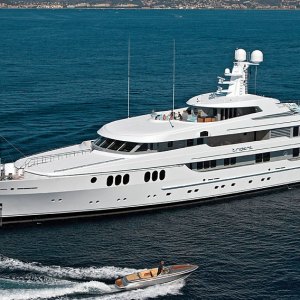 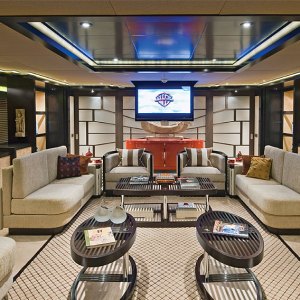 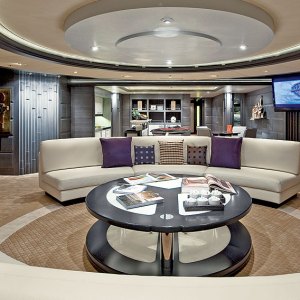 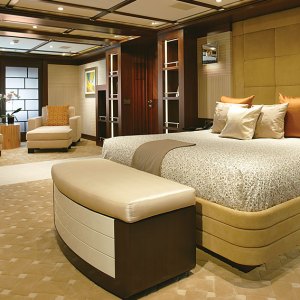 Guests who charter Feadship’s Trident—the 800th yacht to launch from the Danish builder’s Royal Van Lent shipyard—will likely want to spend more time on the boat than away from it. And yet the 214-foot yacht, which Feadship delivered last August, offers any number of incentives to leave. Trident comes equipped with an armada of small watercraft—two 22-foot Chris-Craft tenders, a 14-foot sailboat, two 11-foot sea kayaks, and a Yamaha WaveRunner and SuperJet—as well as gear for snorkeling and scuba diving in the Mediterranean and Caribbean, where the yacht will be available for charter this summer and winter, respectively. While aboard the ship, charter guests will enjoy a seven-stateroom layout conceived by English designer Donald Starkey, and the discreet services of Trident’s expert crew of 14.

The Big Picture | Starkey created Trident’s public spaces and guest areas to encourage use of the ship’s myriad entertainment options. Through one easy-to-use Kaleidescape media server, a library of hundreds of movies is available on all of the yacht’s 10 guest-area high-definition TVs, which range in size from 32 inches to 52 inches. The server also offers a selection of music, which can be played throughout the interior and exterior spaces, including all of the staterooms.

The main salon and the bridge-deck lounge each feature a 52-inch flat-screen TV that lowers from the ceiling. While the main salon serves as Trident’s primary gathering area, the lounge doubles as the yacht’s cinema, with semicircular couches that can be rearranged so that they all face the TV. The gray-pine-walled lounge also features large curved doors that slide open to the entire aft sundeck so that the room can host indoor/outdoor cocktail parties. “It’s all about hanging out and enjoying yourself,” says Starkey. “It’s a space where you don’t feel uncomfortable in your bathing suit.”

Decked Out | Trident guests can gather on the aft deck for casual meals prepared by chef Simon Jones, who helmed the kitchen at London’s L’Escargot when it earned a Michelin star in 1996. More formal meals take place in the yacht’s main dining room, which the crew accesses via inconspicuous passages connected to the galley. “I designed the yacht so that guests can expect service in a discreet way,” says Starkey. “I didn’t want the crew running through the main salon to get to the master stateroom to make the beds.”

For the master stateroom, which is located on the main deck, Starkey created distinctly styled his-and-hers bathrooms, as well as a lounge, dressing room, and separate office. Trident also includes an adjacent VIP stateroom and five lower-deck guest bedrooms (four of which can be joined to become two VIP suites).

Chaise lounges are the furnishings of choice on Trident’s expansive top deck, where shade is always an option thanks to a large retractable canopy. The space connects to a forward deck with a large hot tub—an ideal place to unwind after a day of using Trident’s toys and tenders to explore the Caribbean or Mediterranean.