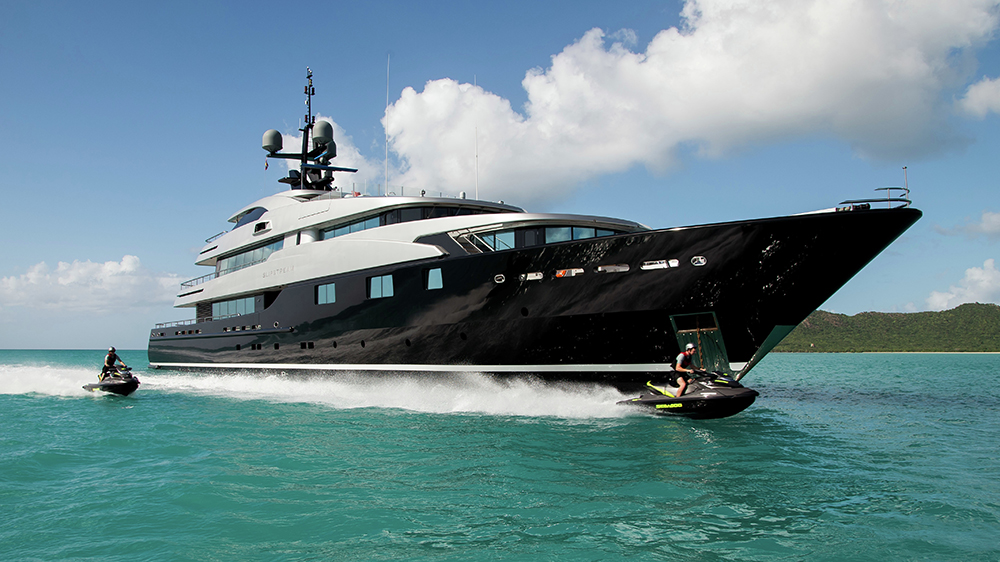 What are the key attributes that make a charter yacht successful? Is it flexibility? Accommodating crew who become an extension of the family? A gargantuan collection of mind-blowing water toys? “All of the above,” says Captain Phil Stevens, one of two rotational captains on board 197-foot Slipstream.

Built at French shipyard CMN in 2009, Slipstream has been a prolific charter yacht over the course of its nine years. There are few places its eye-catching black hull and silver superstructure won’t travel. From the British Virgin Islands to the Baltic, even South America, the yacht cruises where the charters dictate, says Captain Phil. His favored destinations are Croatia and Turkey, along with the Ionian part of Greece. “I would start off in Athens and finish in Venice, passing through the Ionian Islands, Montenegro, and Croatia along the way. It’s so easy, you can always find somewhere to hide. You can lose yourself there,” he enthuses. His passion is contagious, exemplified by his 17.5 years spent in the employ of Slipstream’s Australian owner, not to mention his multiple clients who have clocked up 10 to 15 repeat charters.

Interior and exterior styled by Winch Design, Slipstream possesses many of the hallmarks of Winch’s renowned penmanship, from the carpet motifs that mimic the ceiling panels in most guest areas to the signature skylounge. Furnished in muted cream tones with large black leather armchairs, it doubles up as an indoor cinema; the screen majestically rising from a chaise longue with large panoramic windows blacked out for full effect. From movie nights to Xbox gaming to reviewing the crew’s drone footage of the day’s adventures, guests are treated to far more than a room abounding with comfy sofas and plush furnishings.

Artwork throughout the yacht (curated by Winch) reflects the owner’s international background, with a mix of Aboriginal and North American pieces. Three commissioned totem poles with gods, eagles, bears, and fish soar 15 feet up through the stairwell to the deck above. Carved by Canadian artist Stanley Clifford Hunt from three single pieces of solid cedar, they set the central tone of the yacht, figuratively and literally.

At the forefront of Slipstream’s offering is its positioning as a prized family charter vessel. The yacht’s impressive chest of water toys includes Sea-Doos, standup paddleboards, kayaks, and the highly popular 49-foot-tall waterslide that descends from the sundeck. Along with inflatable platforms, it forms the centerpiece to the enthusiastic crew’s assault course, which they often set up for the more active charter guests. And as a ratified training school, guests can also obtain their jet-ski license during their stay. Whether spending all day tearing across the water at 80 mph, learning to sail the Laser dinghy with Ben (deckhand), or taking wakeboard instruction from Liam (chief officer), it’s not surprising that most guests spend a high proportion of their time in and around the water.

Both Captain Phil and his rotational colleague Captain Steve Osborne are fathers, which means small yet important details, such as mesh screens and safety gates on the top of the stairwells, come as standard. When teamed with a crew of 18 who tend to develop a charismatic rapport with children of all ages, it’s easy to see how family charter guests keep coming back for more.

Relaxation at the Core

Whether advanced or a beginner, taking yoga or Zumba classes on the aft main deck with Tiffany (chief stewardess) or an insanity fitness session with Nick (second officer) is the perfect post-breakfast workout, not least because chef Richard “Tricky” Harrison is somewhat unrivaled in the galley. His protein balls made from dates, lime, coconut, fig, cashew, and pistachios are matched only by the array of freshly baked bread (including gluten-free) and vast menu of homemade smoothies and juices on offer. Family buffets on the bridge deck aft are a popular event, as are themed party nights on the large sundeck, which can be fitted with a glittering disco ball. And Tricky’s cooking lessons often result in  kids’ fairy cake competitions.

Ample opportunities for both indoor and alfresco meals abound, from formal dining in the main saloon, eating in the round on the skylounge’s double lazy Susan table, to the generous sundeck. Plans for a fully retractable sunroof will be realized this winter, along with rain-activated sensors, mood lighting, and side window screens. “It means that sunny meal times and outdoor starlit cinema screenings can continue whatever the weather,” says Captain Phil.

Perhaps the most breathtaking dining option of all, however, takes place on the 6.5-foot swim platform, equipped with a misting system for when it’s exceptionally hot. “It’s a great base, and certainly isn’t restricted to just water sports,” says Captain Phil. “We hang lanterns and fairy lights for extra ambience, and dinner is served for up to six people on the water’s edge.” Once the entire hull has been polished this winter, Slipstream will look pretty fabulous from afar as well.

Room with a View

With sumptuous accommodation for 12 guests in seven cabins spread across three decks, guests are spoilt for choice. This includes two Pullmans unconventionally located in the gym—a popular choice with children—as well as room enough for a nanny when required. The VIP cabin with its private balcony separated from crew-accessible areas by a frosted glass screen provides some of the best views on board, while the master suite, with its high ceilings, private study, and frosted-glass en-suite leads directly to the observation lounge. “This area leads out to the foredeck and is the owner’s wife’s favorite room,” says Captain Phil.

The master suite is also a preferred location to take a massage, either undertaken by Slipstream’s trained masseuse Tammy or by a shore-based professional. When it comes to capturing the most spectacular horizons, the jury is out on where best to position yourself. According to Captain Phil, it’s on the bridge at 5 am to watch the sunrise. For late starters, however, the sunken sundeck Jacuzzi at 6 pm with a cocktail in hand is pretty hard to beat.

Slipstream is available to charter with Burgess.