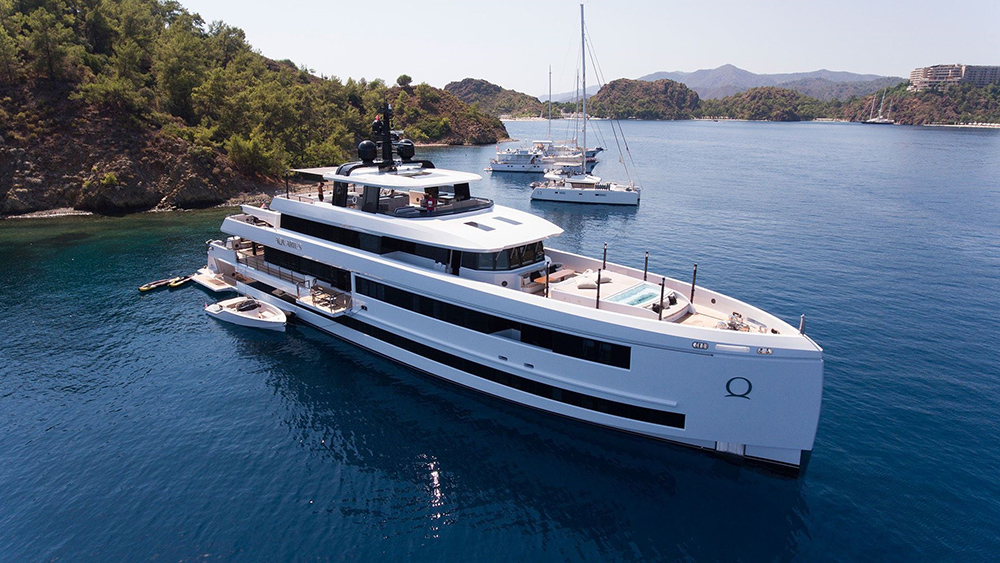 The sequel to Rian Johnson’s 2019 murder mystery Knives Out is making waves in more ways than one.

It’s estimated that Glass Onion: A Knives Out Mystery earned a solid $15 million in a one-week limited release. The whodunit has received wholly positive reviews and a rare 98 percent on Rotten Tomatoes. It has also produced one quite unlikely star: a luxury superyacht known as Aquarius, which is, coincidentally, available for charter.

The 151-footer served as a backdrop for one of the key scenes in Glass Onion. The yacht’s captain, Ali Göksoy, also scored a cameo in the film. For a couple of hundred thousand a week, you too can experience a little Hollywood glitz and glamor aboard Aquarius.

Delivered by Turkey’s Mengi Yay in 2016, the superyacht pairs a straight bow with a handsome wood hull and superstructure. She offers a generous interior with five lavish cabins for up to 10 guests. The main deck owner’s stateroom features a king-sized bed, two balconies, an office and an en suite. On the lower deck, you’ll find three double staterooms and a twin cabin. There will also be a crew of nine catering to your every whim as if you were an A-lister.

Outside, meanwhile, Aquarius sports a veritable beach club at the stern, a Jacuzzi on the foredeck, a sizable flybridge and several other spots for sunning. She also comes with a full fleet of toys and tenders in case you need to make a quick escape. The vessel even has a spot on the aft deck for a couple of roadsters.

As for grunt, Aquarius is powered by twin Caterpillar engines that give her a cruising speed of 12 knots and a top speed of 15 knots. Of course, the yacht’s also equipped with stabilizers that make cruising the Mediterranean a real treat.

Aquarius is available exclusively with Ocean Independence. You can book her for charter in Turkey for roughly $228,000 (€220,000) a week.