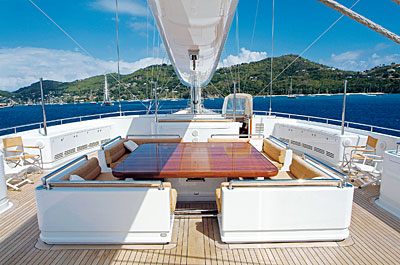 As the world’s largest sloop, the 247-foot-long Mirabella V tends to draw attention to herself. In fact, her mast, rising nearly 300 feet from the deck, is so tall that pilots complained it was a distraction when they flew near the yacht’s anchorage in Prickly Bay, Grenada. This was going to be the point of departure for our charter through the Grenadines, which would include stops at Carriacou, Petit St. Vincent Resort, the Tobago Cays, Mustique, and Bequia. When he greeted us, David Dawes, the yacht’s Australian captain, explained the brouhaha with a shrug of the shoulders and a smile, and said that we would have to relocate to a different, though equally beautiful anchorage before sailing north.

Although some aircraft pilots may disagree, Mirabella V is ideally suited for the Caribbean, where trade winds are strong and the breeze is fairly consistent. (She is cruising the western Mediterranean this summer and will return to the Caribbean for the winter season.) Her acceleration, once her sails are raised, is fierce; within minutes of the crew’s hoisting the main and the jib, she will push 18 knots in moderate air. You can sit back and watch the 13 crew members at work, or you can accept Capt. Dawes’ invitation to take the helm. You will find that Mirabella V—launched in 2004, designed by renowned naval architect Ron Holland, owned by former Avis rental car company CEO Joe Vittoria, and available for purchase for $90 million—is well balanced and responsive. The charter group before ours comprised well-seasoned racers who reveled in sailing the yacht aggressively, reaching speeds as fast as 20 knots.

Our two families, which include three teenagers, also enjoy going fast, but we were content to cruise at a leisurely pace. The younger members of our party took advantage of the assortment of toys stowed in the garage, which includes a Laser sailboat and snorkeling gear. For a less active form of recreation, you can loll about in the foredeck swimming pool, a rarity aboard a sailboat. You also can take in the view from the hydraulic lift that scales the mast, but it might be best not to wave at any passing airplanes.