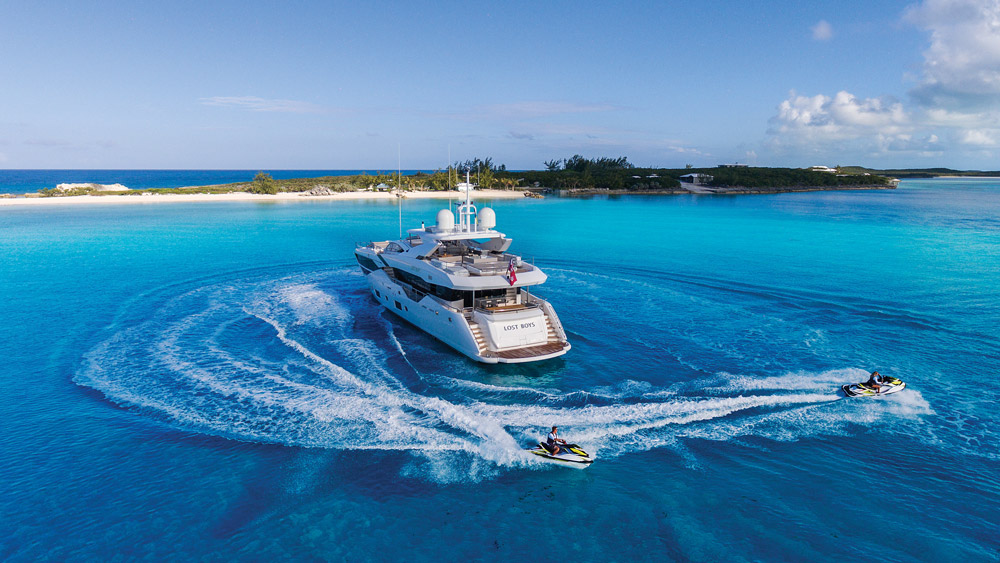 On a recent Thursday morning, my husband and I boarded an early-morning small-plane flight at the executive airport in Fort Lauderdale, touched down briefly in the Bahamas’ port of entry for customs, and landed on Staniel Cay, part of the Exumas in the Out Islands archipelago of the Bahamas. Mate Ben King gathered us into a yacht tender anchored at the Staniel Cay Yacht Club docks and whisked us to meet our headquarters for the next few days: the Sunseeker 116 superyacht Lost Boys. Within seconds, we had fruit smoothies in our hands and a breakfast spread before us as we discussed the trip’s exploration options. No stress. No pressure. Just fun. This was a quick introduction to how intuitive and thoughtful the crew aboard Lost Boys is. They made a whirlwind trip easy and relaxing.

Once revived with food and drink, all the guests threw on bathing suits and hopped back in the Williams Jet Tender with Ben, who navigated us first to feed the famous swimming pigs that inhabit a beach on Big Major Cay. Ben tipped us off in advance to the porcine appetite—the Exumas pigs, as they’re known, were eager for the potato halves he had given us, and one pig even tried to climb into the boat with us, eliciting a squeal from me. Despite this, we enjoyed diving in and paddling beside them in the translucent, turquoise water.

From there we motored to Bitter Guana Cay to feed the Bahamas Rock Iguanas. As we waded onto shore, the iguanas crept out from the bushes, ready for our spoils. We fed them watermelon bits on skewers so we could keep our distance from the swift but harmless creatures, which looked a little too close to small dinosaurs for comfort.

The next stop was Thunderball Grotto, named after the James Bond movie shot there. Adventurous types can climb over the rough terrain to the top and jump through a rocky hole into the partially filled cave. There were too many swimmers treading water inside the grotto for any of us to test our bravado, so we strapped on snorkel gear and dipped under the low opening in the rocks to emerge in a large cavern.

Lunchtime approached, so we headed home to Lost Boys. This proved to be the perfect time to lounge around on the sundeck sun pads surrounding the Jacuzzi, sipping rosé Champagne and soaking up the sunshine while delicious smells wafted up from the galley from the deck below. We watched flying fish catching air beside us as we cruised to our overnight anchorage, the various islands of the Exumas sprinkled before us amid the crystal-clear water.

Lunch was served at the aft-deck dining table, a pair of cocktail tables that transform into one large dining surface. Its U-shaped settee and accompanying loose chairs seat 10. Adjacent to the seating area is a bar with stools, great for any overflow. Lunch itself did not disappoint. The regular chef was on leave, so chef Sergio Marichales stepped in for our trip. Such dishes as a refreshing gazpacho starter, cucumber salad with yogurt dressing, fresh sautéed shrimp, grilled snapper and haricots vert, scallops and cauliflower, and a side of farro—all served family style—silenced the group as we appreciated each refreshing and tasty bite. As we enjoyed the incredible, Instagrammable meal, chief stewardess Albina Pojana kept us plied with drinks, thoughtfully concocting nonalcoholic options for my husband.

Next up were water sports. We all took turns on the pair of stand-up paddleboards, the two SeaDoos (which each seat two), a Seabob, and the scream-inducing waterslide that starts at the sundeck and drops you into the water. Lost Boys also stores fishing rods, water skis, towables, and electric scooters and road bikes for land excursions.

The rest of the day was spent sunning, eating, drinking, napping, and soaking in the Jacuzzi on the sundeck, where we all took advantage of the yacht’s Wi-Fi. Just before dinner, the tender shepherded us to shore for a sunset toast and a few appetizers while we hunted for shells and watched the sun dip behind the horizon. And then we were zipping back to the boat to prepare for dinner.

Albina served a formal multicourse dinner in the main-deck dining area. All scrubbed up from the day of fun, we devoured course after course, including fresh-caught lobster that some local divers delivered to the yacht that afternoon.

We finally called it a night, retreating to one of five en-suite cabins, comprising the master, two fixed double cabins, and two twin cabins that can adjust into doubles. The main-deck master stateroom features a king-size bed, a desk with views through the huge window, a sleek dresser, a flat-screen TV, a closet, and a step-down bathroom with a double vanity, Asprey of London bath products, and an extra-large rain shower. The cabins belowdecks include similar amenities.

The decor throughout the yacht is sleek, comfortable, and contemporary—​nothing over-the-top that might make you think twice about lounging with your feet up. The cream-colored carpets, walls, and furniture are offset with dark wood trim for an understated sophistication.

Morning meant a full spread of fresh fruit and pastries, yogurt, eggs, and other breakfast treats. We had this meal in the dining room, which felt light and bright with never-ending views through the large windows. This was a different ambience from the softer light and dark night sky of dinner. Albina was busy making us cappuccinos and lattes between refilling our glasses with fresh orange juice.

Over Champagne in the sunlight-​flooded main saloon, Bryan Jones, Sunseeker’s marketing manager, schooled us on the stats of the 116 Yacht: “The 116 Yacht was based on the 115 hull, with a new superstructure and numerous modifications to increase exterior and interior accommodation, including 24 percent increase in exterior entertaining space over the 115,” he said. “This week [early April] we have launched the 11th 116 Yacht. There 17 116 Yachts currently launched, in production, or sold.” And while the 116 Yacht was an evolution of the popular 115, named both the Predator 115 and 115 Sport Yacht, 18 boats in all were built between 2012 and 2015.

With regard to the exterior entertaining space Jones mentioned—which includes the beach deck, the aft and forward areas of the main deck, and the sundeck with its retractable sunroof—my favorite spot was the foredeck sun pads and dining area, tucked just in front of the bridge windshield. While anchored, shade sails kept us comfortable, allowing for breezy napping after a long day. Our final meal on board was at that foredeck seating area. It sat all seven of us in partial shade and provided amazing views of the turquoise sea.

This particular 116 Yacht hull, Lost Boys, is owned by a young Englishman who has been thoroughly enjoying his new superyacht since it was delivered just in time for September’s Monaco Yacht Show last year. When asked why the owner chose the name Lost Boys, Jones explained, “This is in reference to the owner’s love of the Peter Pan stories and his ability to escape with his friends to the joys of his beloved 116 Yacht.”

This summer, he is chartering it out, kicking off at the Monaco Grand Prix in May, and then cruising down through Corsica, Sardinia, the Amalfi Coast, and Aeolian Islands before moving on to Croatia and Montenegro. Lost Boys will be back in the Bahamas for the 2018–2019 winter charter season. Lost Boys has six crew in all, including captain Adam Wierzba, mate Ben, chief stewardess Albina, rotating chief engineers Jared Sharples and Stuart Ivison, and head chef Liesel Aldridge. Two MTU 16V 2000 engines give the yacht a top speed of 26 knots and a cruising speed of 18, making for a smooth and seamless getaway.

The short time spent aboard Lost Boys could have been hectic, given all that we enjoyed in just two days, but thanks to the crew (and perhaps that 26-knot top speed), everything felt easy, relaxing, and fun—a brief visit to both Neverland and Nirvana.

Highlights: Glorious foredeck sunning, dining, and seating area; comfortable sundeck with Jacuzzi, sun pads, a bar, helm, and shaded seating and dining; tons of toys, including an inflatable waterslide that reaches from the sundeck to the water.