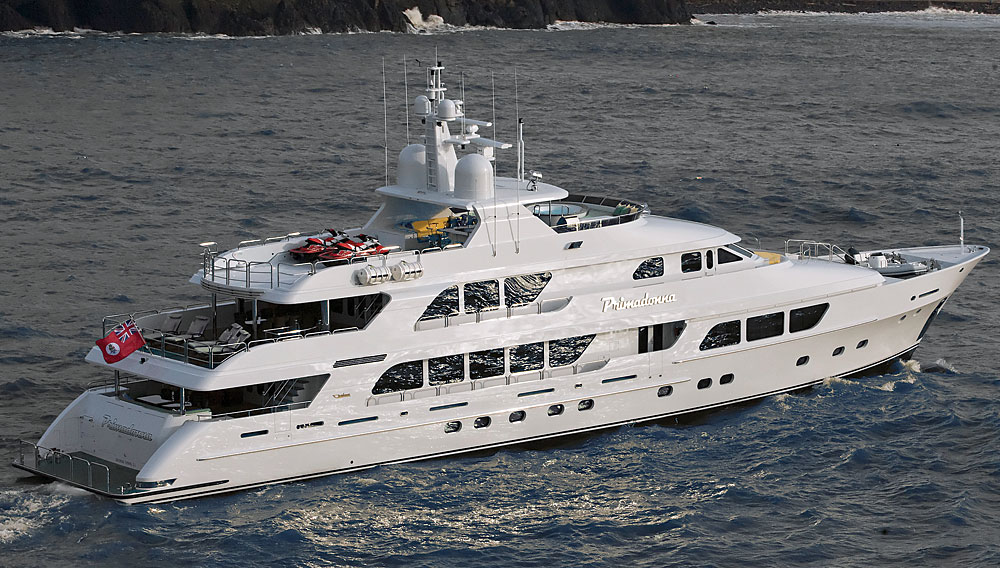 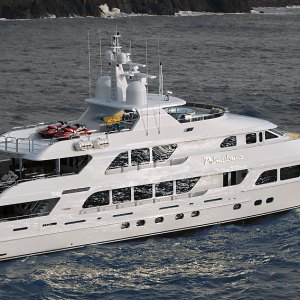 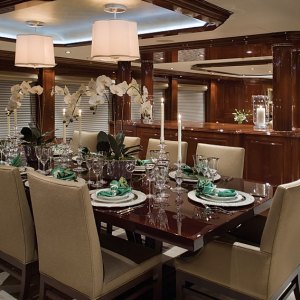 Christensen Yachts has made quite a name for itself over the last decade with the yachts in its distinctive Custom Series. For example, Casino Royale, the Washington shipyard’s most notable launch in 2008, featured detailed sapele wainscoting, complex stonework patterns, original artwork, and the curvy shapes of Bond girls—a part of the yacht’s James Bond theme—etched in glass in the boat’s foyer.

Primadonna the 160-foot tri-deck superyacht unveiled in February at the Miami International Boat Show, is certainly less ornate than Casino Royale, but it is no less impressive in the level of its craftsmanship. Designer Carol Williamson used a light touch when creating the boat’s elegant yet relaxed interior. She employed sapele with high-gloss finish in the salon and dining areas, as well as in the skylounge foyer. In the foyer floor, Williamson created an intricate shell-shaped design with mother-of-pearl and Botticino, Verde Giada, Costa Smeralda, and St. Laurent marbles.

The owners’ suite boasts the same level of detail: The husband’s side of the bathroom is white with emerald onyx, and the wife’s side (separated from the husband’s area by an enormous shower) has white onyx and rose quartz. The bridge and main-deck powder rooms feature Botticino and St. Laurent marbles.

Primadonna’s owner, who says he would rather sport fish off the Baja California coast than mingle with more socially inclined yachtspeople in Cannes, plans to spend months on board next year on an extended cruise around the South Pacific. To make the transpacific journey, the yacht has an impressive range of nearly 5,000 statute miles. To indulge the owner’s passion, Christensen included a set of navigation controls on the stern so that the captain can back the vessel up for fishing maneuvers. There are also zero-speed stabilizers that minimize rolling during overnight stays in secluded anchorages. Finally, Primadonna has a touch-and-go helipad, allowing guests to join the yacht in remote locations.

“This is the owner’s second Christensen,” says Christian Bakewell, Primadonna’s captain. “On our first trip to Baja, he fell in love with his new boat. The previous Primadonna was 145 feet long, so this was a big upgrade.” The owner, he says, was “flabbergasted” that they did not experience any maintenance issues after the launch. “We’ve put a few thousand miles on the engines and so far, no alarms or any other problems,” Bakewell says. “I’m impressed with the exterior layout and level of detailing on the interior. But I’m bowled over by how well the yacht handled its first few months at sea.”