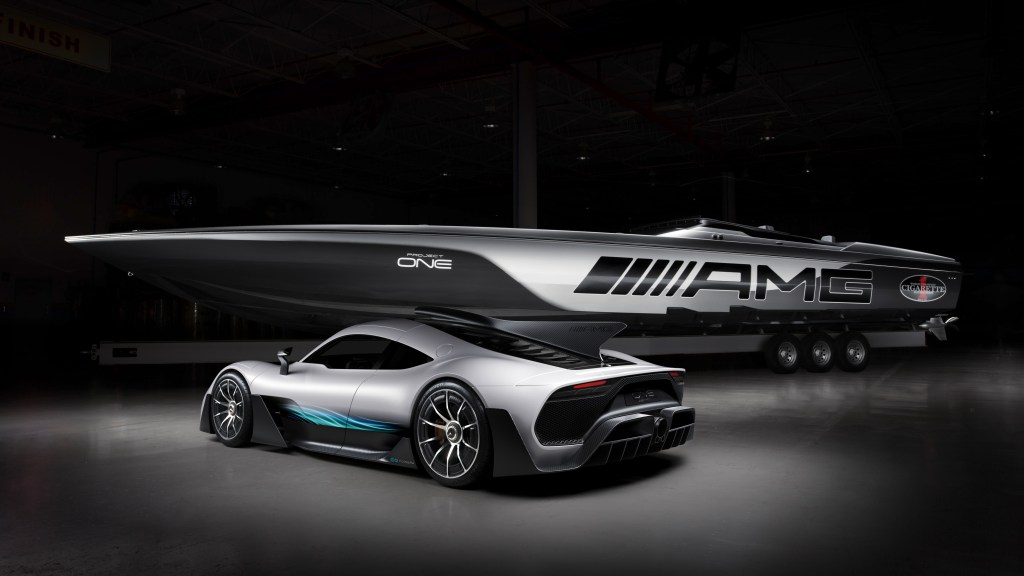 Running at 120 mph across open water can be a terrifying experience. If you turn your head ever so slightly and try to talk to the white-knuckled person next to you, you can guarantee that your sunglasses will disappear and your mouth will puff up like a blowfish. At that speed, some raceboat hulls feel like they’re dancing back and forth on the water so wildly—chinewalking, boaters call it—that it could spin out in a heartbeat.

On Cigarette Racing’s custom 515 Project One, however, the experience is exhilarating, and always under control. I found that out firsthand during a run last week on the newest Cigarette, a one-off design based on the 217 mph Mercedes-AMG Project One supercar. It looked like a fast boat even at the dock, with its black-and-silver exterior and special badging, a nautical twin to the Project One supercar in the Cigarette booth. Of any boat at the Miami boat show, this received by far the most attention.

For good reason: Cigarette is in its 11th year of collaboration with Mercedes, and has worked closely with the AMG design team each year to come up with a showstopper of a boat based on one of Mercedes’s most exciting new cars. Last year’s model was based on the Mercedes-AMG GT R, aptly nicknamed the Beast of the Green Hell, and was built around the Cigarette 50 Marauder. I had a chance to run that one, too, and it was one of the most exhilarating rides of my long boating career.

This year’s run on the 515 Project One was just as good, if not better. Both design teams have been pouring more resources and time into each year’s new collaboration. The teams have also become close over the years. Gorden Wagener, Daimler AG’s chief design officer, told me that this year’s project was the most challenging yet. “The process of moving features from a hypercar to a hyperboat meant that nothing in the design is decorative,” Wagener said. “It’s pure function matched to the features of the sea.”

Cigarette also went far beyond the call of duty by designing an entirely new hull for the 515 Project One. Typically, the Miami-based builder uses a stock hull and heavily modifies it to become the nautical version of that year’s Mercedes-AMG. The 515 is different. “Our goal was to create a boat that is a foot longer, 3 feet taller, and 1.5 feet wider than the 50 Marauder,” says Chad Braver, Cigarette’s head of product development. “But we wanted it to be the same weight. That involved a new way of thinking about engineering.”

The extra dimensions might not sound like much, but they added 30 percent more volume to the hull. The Cigarette team couldn’t just add a foot at the stern and widen the cockpit. Boats like these have to be lightweight and structurally sound since they take a beating in ocean waves at high speeds. Cigarette created new molds for the 515, while employing carbon fiber and other exotic materials in the deck, forward bulkheads, cabin liner, and engine hatch to keep the boat light and strong. “We used Kevlar in the bulkheads because of its toughness,” says Braver. “It was critical that we get the right materials in the right places. We were very happy with the way this boat runs in rough water.”

I was thrilled on last year’s ride on the Marauder 50, which rocketed to 121 mph with its twin 1,550 hp Mercury Racing engines. The boat never wavered or felt unsafe during the run around Biscayne Bay. But I loved the wider cockpit and softer ride of this year’s 515 Project One, which also accelerated past 120 with the same Mercury engines. Accelerating from 90 to 110 mph in a few seconds in an open-cockpit boat is almost indescribable. Time seems to move from a flow to freeze-frame shots while everything—the water, other boats, and the landscape—streaks by in a blur. There’s no choice but to hang on tight and enjoy the fast ride. Last summer, I went 120 mph up the Hudson River in a canopied performance raceboat. That felt like watching a video game. This Cigarette felt like real boating, complete with the in-your-face winds, Miami sunshine, and fleeting but jealous looks of other boaters who disappeared in our wake.

Cigarette did such a great job on weight savings with the 515 that it added a cabin in front of the helm area—sacrilege on most high-performance boats because that extra weight would slow it down. The 515, in fact, weighed 88 pounds less than the standard 50 Marauder, so it actually beat its weight goals. The owner of last year’s 50 Marauder AMG boat loves the cabin idea so much that he’s having Cigarette build one into his boat, too.