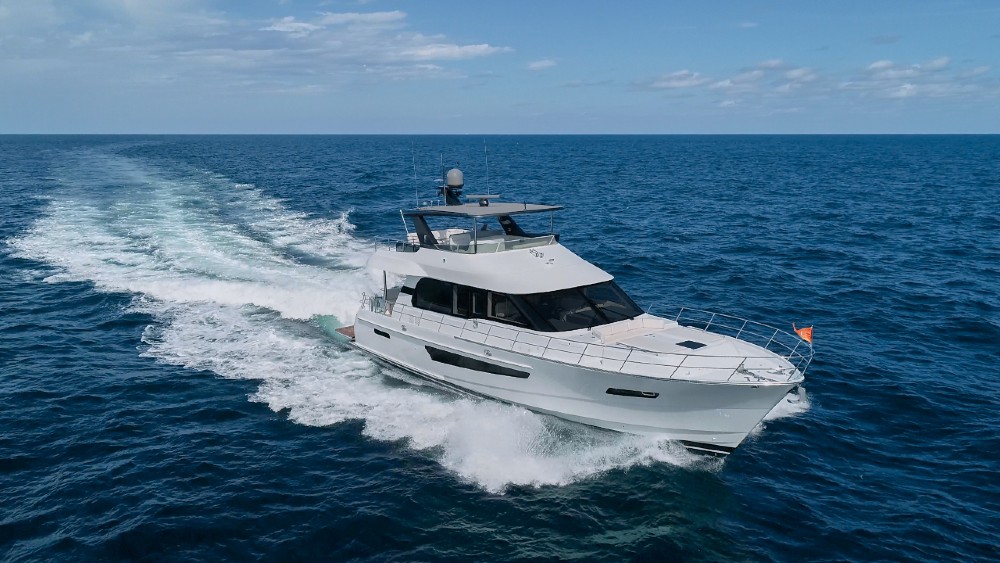 The crowded mid-sized motoryacht market is a famously tough one for a boat to make its name in. And that goes double when a vessel is the smallest model a builder offers. But in the case of CL Yachts’ new CLB65, the baby of the bunch is able to draw from its larger sisterships for inspiration, and also offer some fresh features that help it carve out a singular niche. We had a chance to tour the 65-footer at the Fort Lauderdale International Boat Show.

At 64-feet, 6-inches, the CLB65 might easily be a crewed vessel, but it is clear from the design that its is built for owner operators. A boat this large can be daunting for non-professionals, but the CLB65’s standard twin 800-horsepower Volvo Penta IPS 1050s offer confidence-inducing maneuverability, thanks to the pod drives, particularly at docking speeds.

A full range of speed numbers has not yet been released, but the top end is said to be 27 knots, which should make cruise somewhere in the neighborhood of 21 knots.

Both the lower and upper helms are complemented by seating areas so that guests can comfortably keep the captain company on both day trips and longer weekend hops.

Another owner-operator feature is the aft galley, a first for CL Yachts. The placement of this space accomplishes two things. One, a chef can serve both the interior and exterior portions of the main deck with equal ease. And two, much like the captain, the chef will be able to socialize while cooking.

“Volume and comfort were of utmost importance to us during this yacht’s design,” says Martina Lo, CL Yachts’ director, during a tour of the boat.

The CLB65 is built on the same hull as the CLB72 so the two yachts share the same beam. This extra width is manifest throughout the boat, but perhaps nowhere is it more noticeable than in the full-beam, en suite, amidships master, which benefits from natural light via the yacht’s considerable hull-side glazing. It’s instantly clear how large the stateroom is for this type of boat. When stepping into the suite’s separate head, the CLB65’s size is even more apparent, thanks to the large open space and a separate rainfall shower.

The glazing in the hull, as well as the large windows (some of which open) surrounding the salon are part of what Lo refers to as “a blurring between outside and inside.” That effect is heightened by the interior’s neutral color palette, highlighted by some truly beautiful oiled teak on pieces like the salon’s dinette.

One area where the CLB65 may not be to an owner-operator’s standards is the engine room. It’s an orderly space with a white gelcoat sole good for spotting spills. But headroom is low in some spots.

Despite that, the CLB65 has a well-thought-out layout and design, with genuine pedigree. With five generations of boatbuilders in the Lo family, it’s no surprise that the clan figured out ways to make its newest baby stand out.