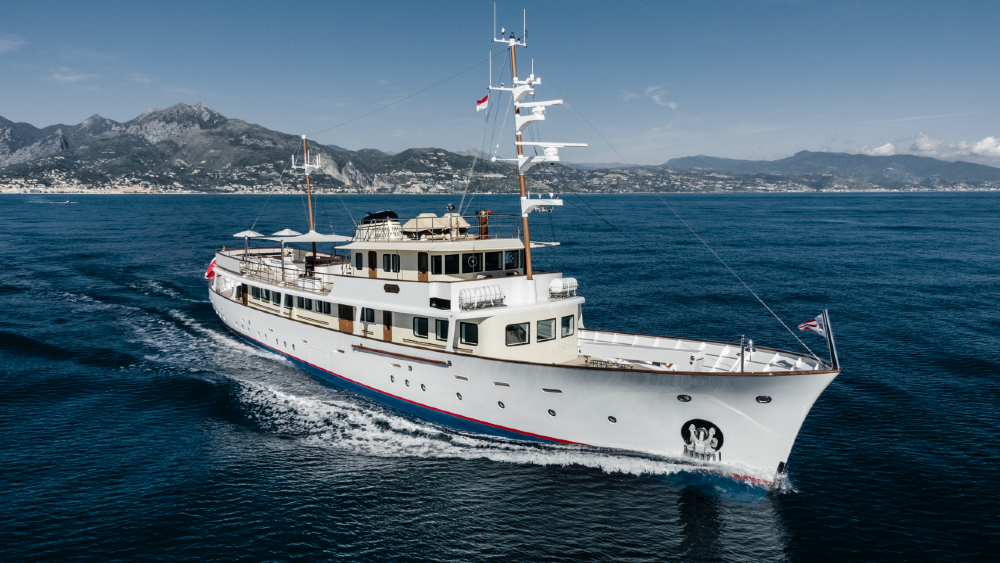 Once the largest motoryacht built in the Netherlands, the 138-foot Istros is a story of passion, neglect and ultimately, as her name means in Greek, inspiration. Delivered in 1954 to the Pappadakis family, who owned a global shipping concern, Istros was the height of ’50s fashion, with white telephones and “violet-blue-tinted bathrooms,” not to mention radar, which was then a rarity, even for a superyacht.

The yacht was later acquired by a British seasoned sailor, owner of classic sailboat Hispania, who gave Istros’s interior a complete overhaul as part of a multi-million-dollar refit. This led to the grand prize for the best restored vessel at the Monaco Yacht Club Prada Classic Yacht Show in 2001.

But when her current owner and his captain of 10 years, Tristan Le Brun, discovered her in the Maltese port of Valetta in July 2015, Istros was little more than a corroding hulk of steel.

Istros‘s current owner found her rusting in a marina. The 1954 hull was rehabbed, but the interior and engines are from 2020.  Courtesy Guillaume Plisson

“She had been lying in the water for years and the rot had really set in,” Le Brun told Robb Report. “My employer and I had been looking for a classic boat to restore for quite some time. It needed to be a yacht built at a reputable yard like Feadship. When we saw Istros we knew she was the right one.”

Having owned three yachts before Istros, the owner’s aim was clear: Preserve the exterior and rebuild the rest.

“It takes intense modifications to convert a boat designed and built in the 1950s into a 2020s-caliber motoryacht, but it was never our intention to make Istros historically authentic,” says Le Brun. “We wanted the elegant exterior lines and emotions of a classic motoryacht without any of the compromises that come with a vintage vessel.”

In other words, old engines, outdated electronics and other systems, not to mention high levels of noise, vibrations and emissions. That pursuit for comfort and efficiency meant complex revisions were made to the new Istros.

Before any work could begin, however, the boat was fully dismantled at a yacht refit center in Valetta and stripped down to the bare hull, and then shipped to a specialist subcontractor in the Netherlands for reconstruction. Feadship also built an entirely new aluminum superstructure, the only element of the build that was to be an exact replica of the original. With very few plans to hand, this was done by 3D scanning the boat at three different stages of the build. The same laser technology was subsequently used to measure the interior volumes.

“The entire boat has been rebuilt and reinforced,” explains Le Brun. “New shaft lines, new main engines and new steering gear have been fitted. Zero-speed stabilizers and a bow thruster have been added.”  Istros also now complies with the latest safety standards. That meant changing the position of the watertight bulkheads to modify the structural integrity of the boat.

The key feature of this refit is the first Lloyds’ class-approved microturbine on any yacht. Compact, vibration-free, and highly efficient, the low-emissions generator provides the yacht’s electrical power, while also being IMO Tier-III compliant.

Feadship suggested the microturbine. “From an owner’s perspective, the benefits are ten-fold,” he adds. “When you’re sitting at anchor, you can’t hear a whisper from the turbine. It can run for thousands of hours before any maintenance is needed. The funnel exhaust system is compliant for harbor use, so we can arrive in a marina and stay on generator power without disturbing our neighbors.”

The interior has been fully reimagined in a chic Scandinavian style by Van Geest Design. There are now more guest staterooms, and all cabins, including the owner’s suite, have been enlarged and rearranged. The main salon and galley have also been redesigned.

“We’re playing with smaller volumes than yachts built today, so the interior needed to be minimalistic and light with just a few classic touches,” says Le Brun.

Completed at the end of last summer, Istros made her way from the Netherlands to Monaco to meet her owner. “He was sitting on the terrace of the Yacht Club de Monaco enjoying a glass of rosé when Istros cruised into the marina in front of him,” says Le Brun. “It was a very special moment.”

After 66 years, Istros has become a beautiful showboat again, but with all the advantages of a contemporary superyacht.  Courtesy Guilaume Plisson

Istros is available to charter in the western Mediterranean next summer through Cecil Wright & Partners.