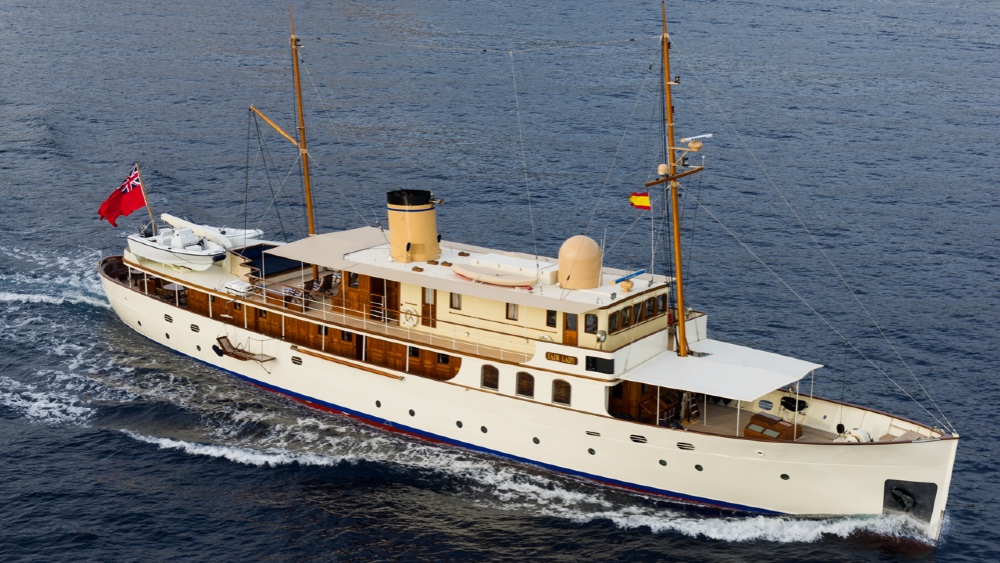 For Jonathan Turner, owner of the authentic 1920s yacht Fair Lady, the marriage of classic design with modern technology is a match made in heaven. The 121-footer, built and launched by Camper & Nicholsons in 1928, bears all the hallmarks of the fabulous flapper era, but remains a yacht designed for adventure, owned by a man intent on finding one.

The exterior is by Charles E. Nicholson, one of the most famous names in yacht design in the early years of the last century, while the interior comes from the drawing boards of modern yacht designer John Munford. This unlikely dream-team of two designers separated by a century has resulted in a unique yacht. Fair Lady’s mahogany-paneled walls and Art Nouveau furniture ooze original character, while the contemporary adaptations provide every modern comfort on board. The 1920s ship’s wheel and brass binnacle, for example, sit alongside the very latest electronics and navigational equipment in the wheelhouse.

The card room on the main deck retains the original pearwood detailing and the “chairs are the same as when it was built,” says Turner. “We know that because we’ve got the original photos.”

The 121-foot yacht has been refitted to retain its 1920s Art Nouveau charm without compromising modern comforts.  Burgess

What began as a whimsical purchase of a Triumph TR3 over 20 years ago for Turner has grown into a passion for “old things.” Fair Lady is his first yacht, and she is part of Turner’s sweeping collection of vintage cars and motor memorabilia, including an XK140 Jaguar and eight vintage Bentleys, one of which he drove in the Monte Carlo Rally. He’s also raced the Orient Express across Europe (and won), completed the Peking to Paris Rally twice, and says his first experience of the Peking endurance race dramatically changed his life.

“We were the first people to drive through Iran since the fall of the Shah in 1977, and the first non-Chinese citizens ever to have Chinese driving licenses–all of this in a 1928 Bentley,” says Turner. “That car has been part of my life for 20-plus years. I realized then at the age of 30 that you can go anywhere in the world with old machinery that everybody else thinks is going to break down and have a phenomenal adventure.”

Since undergoing a significant refit at Pendennis in 2006, Fair Lady has had several return trips to the U.K. shipyard for maintenance. “It costs a fortune every year to get the timber varnished,” Turner says. “It’d be so easy to cut costs and paint it, but that’s not what you do with antique furniture. I love old furniture, it’s got character and was built properly. Fair Lady is basically an Edwardian house on the water.”

Some of the equipment like this brass telegraph is original, but just about everything else has been modernized, with a period-correct overlay to hide the latest technologies.  Burgess

A sheltered alcove on the sundeck makes a popular spot for breakfast. The expansive sunpad and wooden sun loungers aft catch the sun, and on the main deck a chic Parisian bench bends around the stern. Each of the guest cabins have vintage 1920s telephones that have been converted to plug into a modern socket. An old-fashioned radio has been reconditioned to hold an MP3 player. “Everything on board–the doors, the handrails, the master cabin–is the same as when it was built,” says Turner. “I don’t want anybody to go on that boat, with all its charm and beauty, and see anything modern.”

Along with Turner’s appreciation for authenticity is his palpable sense of fun. “I bought a yacht with a funnel and a horn that properly honks because it’s really cool,” he says.

For those looking to share in the adventure, a seven-day charter itinerary along the Scottish coastline could be just the ticket. Fair Lady will sail via the Inner Hebrides, the Treshnish Isles, all the way up to the Talisker whisky distillery in Stein, before returning by Loch Drumbuie, one of the best yachting anchorages in Scotland. Turner’s private Cessna 208 seaplane and private estate on the shores of Loch Sunart can be included in the trip.

Now located in Scotland, Fair Lady offers a retro lifestyle in some of Britain’s most charming cruising grounds.  Burgess

“I don’t spend as much time on board as I’d like, but hopefully this year with Fair Lady being in Scotland, that will change. What I really want to do is get 12 friends together and have some fun on board. When I’m racing my cars I’m by myself, and that’s a bit selfish, whereas when you’ve got a sociable boat like Fair Lady, then you can really enjoy yourself.”

Fair Lady is available to charter through Burgess from $73,000 a week. Here are some other shots of this very classic lady.

The 121-footer had an extensive refit in 2006 to bring it back to her former glory. She returns each year to Pendennis to have all mahogany revarnished.  Burgess