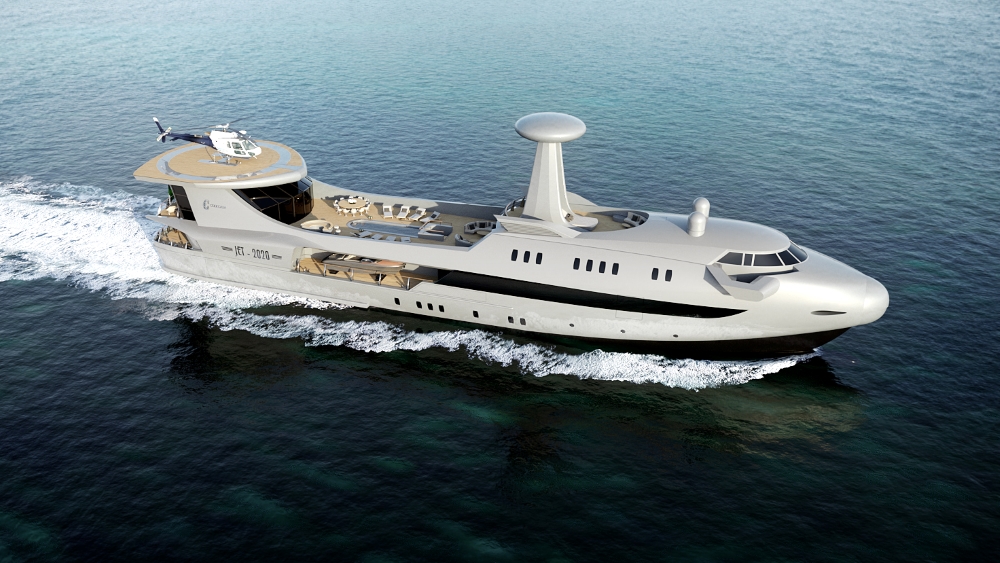 What do you get when you cross a megayacht with a jumbo jet? Codecasa can show you. The Italian yard just unveiled its new 230-foot superyacht concept, which it describes as “a one-of-a-kind creative explosion” that fuses aviation and marine design.

The gargantuan cruiser fittingly called Codecasa Jet 2020 was penned by Fulvio Codecasa and is slated to become the flagship vessel of the Viareggio-based yard. Borrowing from aviation design, the pioneering concept sees the lines of an aircraft transposed onto a superyacht.

The bow emulates the nose of a jumbo jet and the forward section is solid and round in shape similar to a cockpit. Meanwhile, the aft “develops vertically, recalling the “tail of an aircraft,” and there are small rounded rectangle windows dotting the sides of the vessel just like a jumbo jet.

Of course, the one thing which the superyacht will hold over its winged counterparts is the great outdoors. The design’s centerpiece is a remarkable sundeck that will span approximately 65 feet in length and 32 feet in width. Here, guests will have access to an expansive recessed swimming pool, which will measure 20 feet long, as well as a sunbathing area and covered gym. For more fun in the sun, seafarers will be able to make use of the sea-level Beach Club which boasts its own lift and adjoining skylounge with generous glass windows.

Inside, the jet-yacht hybrid will have space for 10 guests. A luxurious owner’s suite will occupy the whole main deck bow area, while four well-appointed guest cabins will be located in the lower deck next to the crew quarters which comprise the forward area. The pilothouse and captain’s cabin will sit upon the bridge deck and can be accessed by a lift that connects all three decks.

To top it off, Codecasa Jet 2020 will be fitted with a helipad to accommodate medium- or large-sized choppers and a double tender area, which will be able to accommodate all manner of sea explorer.

The yard has yet to disclose details regarding possible engine configuration, but construction on the project is set to begin in the first half of 2020.