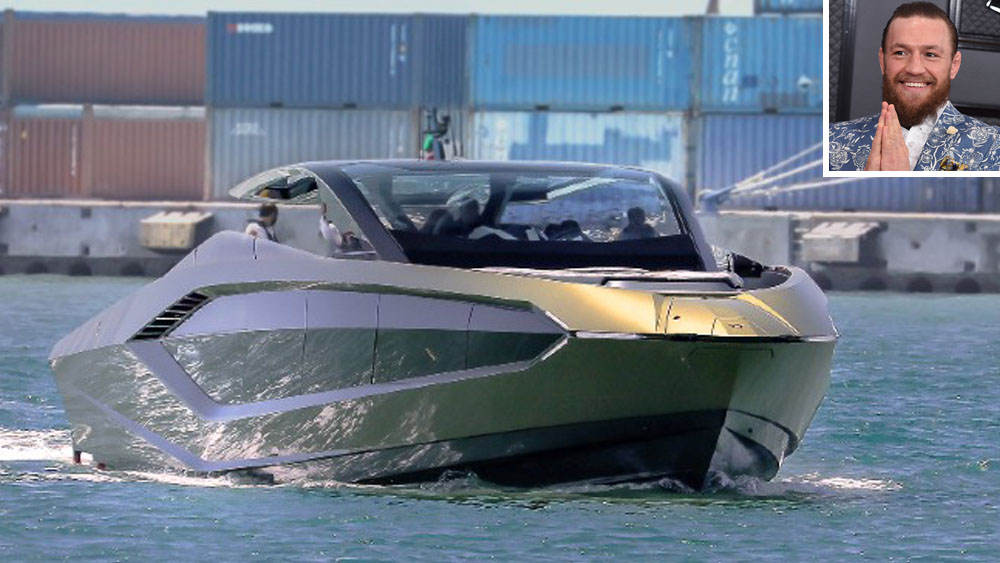 Conor McGregor has a long recuperation period of ahead of him after breaking his leg in his last fight with Dustin Poirier. Luckily for him, he’ll be able to do some of that onboard his lightning-fast new superboat.

The boisterous UFC star showed off his latest luxury toy on social media on Tuesday—Tecnomar’s new Lamborghini 63 motoryacht. The high-performance dayboat doesn’t just bear the name of the famous Italian automaker; it’s been specifically designed to live up to the exacting standards set by its storied supercars.

“My Lamborghini yacht is ready,” McGregor wrote as the caption to a photo of his green Lam-boat being rolled out of the shipyard.

The Lamborghini 63 is a true beast of a motoryacht. It measures 63 feet in length—its name is a reference to this, as well as the year Lamborghini was founded—and is powered by a pair of MAN V-12 diesel engines that produce 2,000 horsepower apiece. Thanks to this, the boat can reach a top speed of 60 knots, making it one of the fastest 63-footers in its class. At the cruising speed of 40 to 45 knots, the yacht burns 100 gallons of fuel per hour, giving it a range of 360 nautical miles.

The first Tecnomar for Lamborghini 63 has all the features of the famed supercar marque.  Courtesy Italian Sea Group

But there’s more to a supercar than its powertrain, and the same goes for the Italian Sea Group subsidiary’s latest watercraft. The Lamborghini 63 looks just as bold and fierce as the automaker’s current crop of vehicles. Cutting a relatively low profile, it’s got a carbon-fiber superstructure that’s adorned with angular side windows that help create the front and rear hexagonal shape found on almost all of Lamborghini’s cars. The visual references don’t stop there, either. The boat is also painted the same verde gea green as the Sián and features two pilot seats like those found in the Huracán Evo, while the helm is based on the Aventador’s steering wheel. One big difference between the boat and supercars: The 63’s interior is surprisingly spacious, featuring two discrete bedrooms.

Anyone whose ever crossed paths with McGregor’s Instagram account will likely have noticed the fighter’s ravenous appetite for the finer things in life. So it should come as no surprise that he dropped $3.5 million on his new seafaring Lambo. Of course, when you’re getting paid as much as $85 million for a fight, that’s just a drop in the bucket seat.