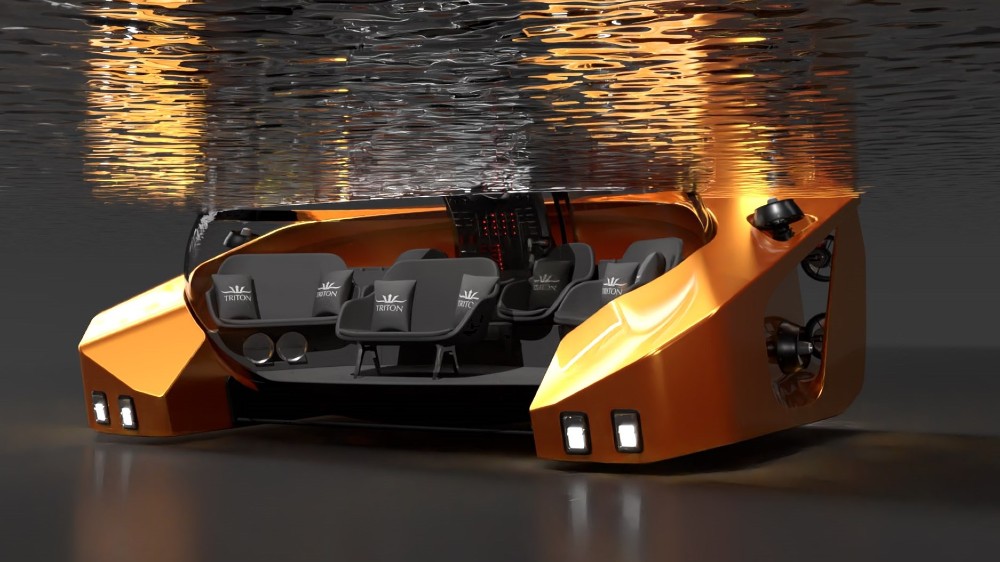 Triton wants to give you a front-row seat to life under the sea—and it’s not messing around.

The Florida-based submarine-maker’s newest models—the 660/9 AVA and its smaller sibling, the 660/7 AVA—give everyone on board a dramatic, unobstructed view of the underwater world. That’s because the cockpit of the 660/9 has three times more interior space than a conventional twin-sponson submersible, thanks to its “free-form” acrylic hull. With seating for eight passengers and a pilot, the 660/9 AVA also has unusually generous headroom, legroom and usable space. The 660/7 has space for six passengers and a pilot.

Indeed, the cockpits on both look more like mini home theaters than conventional submersibles. Both also have convertible seating, allowing for multiple setups that could range from group cocktails to private dining for two; the larger sub could even become an underwater chapel for a wedding among the fish.

“By departing from the traditional constraints of a sphere or cylinder we were able to make minute refinements to the profile,” said designer John Ramsay. “With an interior width of over 12 feet, the interior space will feel more like a regular room than a submersible, and the viewing experience will be absolutely extraordinary.”

The two multi-passenger subs will offer a much more open view of the ocean.  Courtesy Dark Ocean Design

Of course, the big draw is the ability to dive to 660 feet, with everyone having a front-row seat, rather than sitting in tightly packed rows. The subs both have integrated lighting, surround-sound audio and air-conditioning. The acrylic’s refractive index is similar to water, so the tops give the illusion of disappearing once submerged.

The new Tritons are both configured so that the pilot sits in the center with full visibility, rather than forward looking through a small window, allowing everyone to see the same thing. The pilot can then curate the dive.

Another feature that differentiates them from other submersibles is easy access to the interior, rather than having to crawl through a narrow space to get to a seat. The upper portion sits above the waterline when the submersible is floating, not only making it easier to board and embark, but also delivering a dramatic experience when it breaches the surface.

“No longer does a submersible have to depend on a spectacular dive site to provide an unforgettable experience,” said Patrick Lahey, Triton president. “This model allows us the ability to offer owners and passengers maximum flexibility to change and evolve their dive experience.”

Lahey said a 660/9 AVA has been ordered for a private yacht, a second for Scenic cruise ships, and a third for a boutique resort.