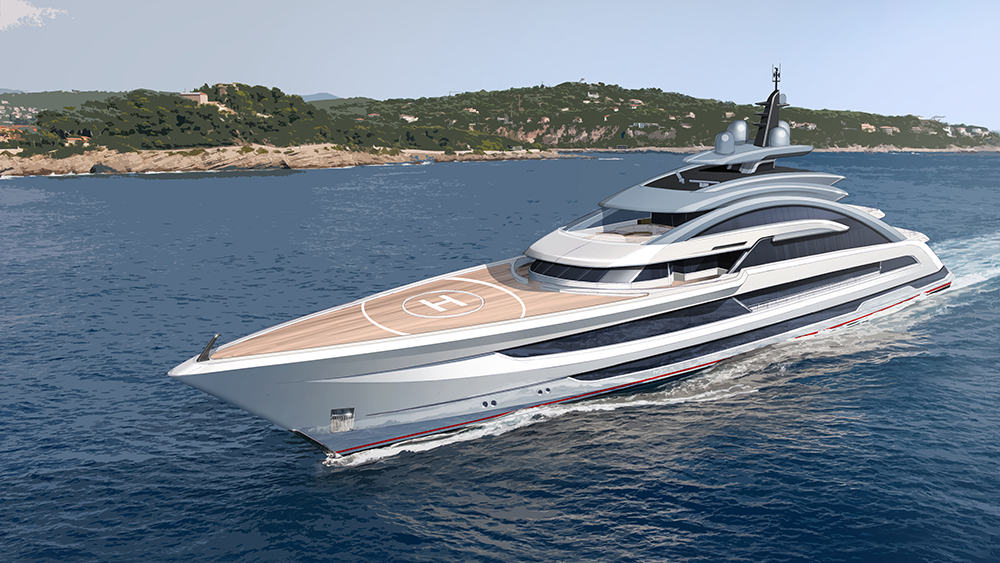 Some yacht owners want what they want, even if means bending the rules of physics. A buyer’s rep approached Heesen Yachts last year, for example, enquiring about the possibility of building a behemoth yacht (to be called Cosmos) that was also light, fast and aesthetically pleasing. Think a 263-foot sports car on the water.

The Dutch yard, which has met and solved many technical challenges in the past, could’ve reasonably been stumped by this request. Technically a gigayacht—a fully custom yacht over 220 feet in length—Cosmos would have the added distinction of being an Olympic sprinter in a world of bloated, supersized vessels.

After Heesen’s engineers studied the challenges, they came up with a solution. Build the yacht in aluminum to keep its weight down, add four mammoth MTU diesel engines (weighing 52 tons) that deliver more than 19,000 hp, and don’t forget to call in two of the most respected yacht designers—one for the interior and one for the exterior, to ensure nothing like this yacht had ever been built.

The plans are becoming reality, thanks in part to a patented feature Heesen is calling “the backbone.” The equivalent of a highly engineered I-beam, the backbone provides longitudinal structural support for the aluminum hull and superstructure without adding significant weight to the overall design.

When it is launched, Cosmos should reach a top end of 29 knots (or perhaps even faster because Heesen tends to be conservative with its estimates).

Winch Design created the sleek, contemporary exterior lines that look to be anything but a massive, lumbering superyacht. The prime features include a 3,000-square-foot sundeck, a flush foredeck that can work as a helipad or giant dance floor, a 24-foot swimming pool with glass bottom, and beach club with a sunken, walkaround bar. On the upper decks, there are exterior social areas both fore and aft of the saloons.

Project Cosmos will have four guest cabins on the lower deck, a VIP stateroom with private studio on the bridge deck, and a master suite on the forward main deck. Its 19 crew will be housed in 11 cabins.