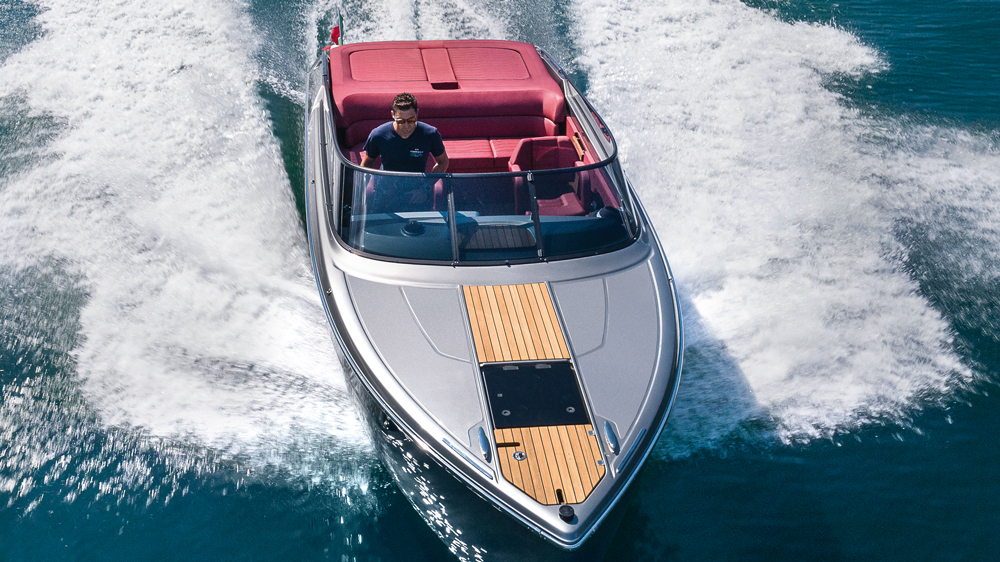 Just like you wouldn’t pair a Brioni suit with a Cassio watch, when your superyacht is built to make a statement, you don’t want to be ferried around in a tender that seems drab in comparison. That is not the word you would use, however, to describe the new Cranchi E26 Classic, for which the Italian shipyard brought in the design talents of Christian Grande, who has worked with companies like San Lorenzo and Invictus and had previously worked with the Cranchi on the E56 F flybridge model.

The new tender does not drift far from the form of classic pleasure boats, but it features a sleek metallic hull marked by a strip of teak wood that resembles a racing stripe on a car. The deck is also made from teak, and is surrounded by seating and a large sunpad, all colored a rich, sensuous red. The mid-deck lounging area can be converted into a small dining area by turning around the cockpit chairs and folding out a small table. If the weather turns less than hospitable, there is a foldaway bimini top that can cover the cockpit area from rain or provide some shady relief from the sun during the middle of the day.

There is not a whole lot of space belowdecks on the E26 Classic, but it is equipped with a cushioned area for lounging or catching a nap. Depending on the interior layout you choose, you can even get an interior head, though the positioning of the toilet in the center of the interior living space does seem a bit awkward, though unusual layouts are nothing new for the brand. In addition to customizing the interior, you also have the option to choose between two engine options from Volvo: one that runs on gas and generates 280 hp or a diesel-powered engine that generates 300 hp. Either way, you’ll make it back to your mothership—maybe the Cranchi Eco Trawler 53—in no time.