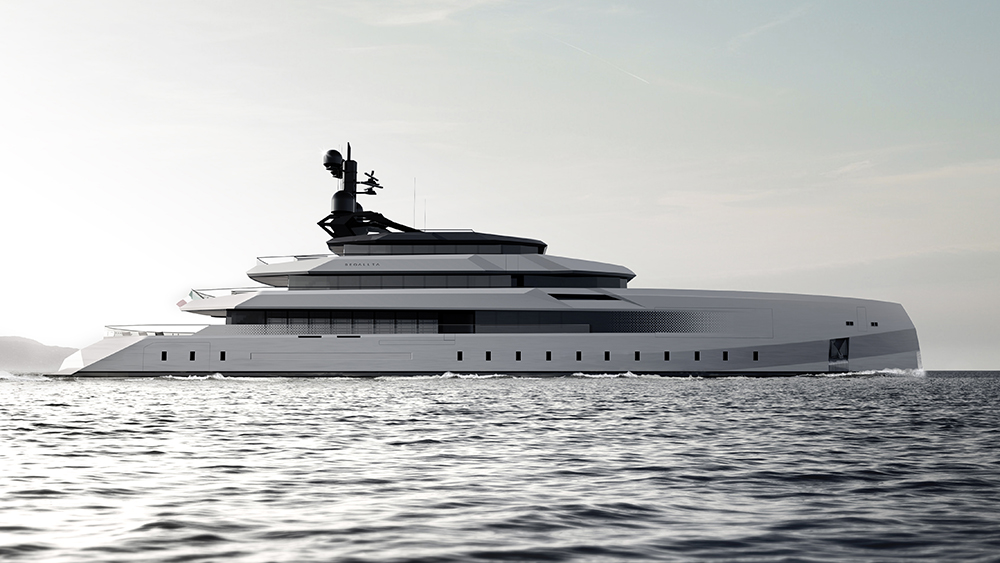 CRN’s new 246-foot Begallta has one of the more interesting profiles, even for a bespoke yacht its size. Foregoing the traditional stacked-deck exterior, Barcelona-based Lobanov Design created an almost eagle-like beak along the forward half of the yacht, with a plumb bow that curves ever so slightly on its leading edge, and decks that climb very subtly toward the top deck. A beautiful but delicate curve separates the hull from the superstructure, looking almost like it was carved from the yacht rather than being pieced together. The sense of fluidity with this exterior is both elegant and understated.

One of the hottest names among yacht designers, Igor Lobanov has created such notable vessels as the 364-foot Oceanco Jubilee and a second 280-foot Oceanco, as well as many other superyachts bearing little or no resemblance to each other. Such is his range. Lobanov’s projects, like the defining windows of the 280-foot Mae or the sci-fi profile of the 328-foot sailing yacht Phoenicia, suggest the scope of his imagination.

View from above.  Photo: Courtesy of CRN

“The constant quest for dynamic, ingenious, original solutions that instantly express a precise idea through the use of different styles is integral to our way of working, alongside the imperative to bring the unexpected to life,” says Lobanov of his philosophy. “Creating iconic yachts that etch themselves into the imagination at first sight is what our design approach is all about. We’re pleased to have worked with CRN on what has proved a fascinating intellectual challenge for our studio.”

On Begallta, Lobanov crafted large exterior spaces for an owner who likes to spend long periods aboard, providing terraces, outdoor saloons, and a spa area with close connection to the wind and sea. The yacht’s stern slopes gently down to the water, more like a sailing yacht than a superyacht this length.

Sundeck with firepit and spa pool.  Photo: Courtesy of CRN

Designing in close collaboration with the yacht’s owner, Pulina Exclusive Interiors created an urbane interior resembling that of a New York loft. The Pisa, Italy–based company—designer of many successful superyachts, as well as luxury residences across multiple continents—used minimalist decor with the most leading-edge entertainment systems for Begallta’s interior.

This yacht promises to be one of CRN’s best creations ever.