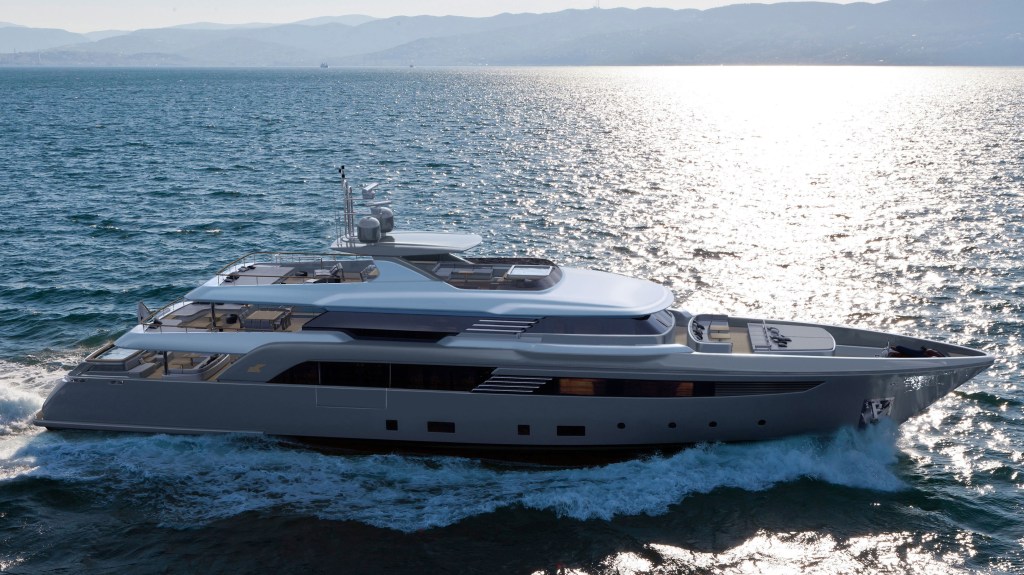 The 164-foot Superconero has drawn its inspiration from CRN’s SuperConero yachts of the 1960s and ’70s. Sanzio Nicolini started CRN in 1963 and built his yachts in steel, an uncommon material at the time, but which would help define the Italian yard over time. A decade later, Nicolini created the 75-foot SuperConero series, which had an iconic shape that included a long transom deck and sharp forefoot. Eventually, CRN built several Superconero superyachts.

Designer Zuccon International Project and CRN are now paying homage to the original SuperConero, including using the sharp forward entry and extended aft deck. But the Italian design firm and CRN’s engineering and interiors departments made the latest Superconero a thoroughly modern superyacht.

The yacht, with its steel hull and aluminum superstructure, features a large social area on the foredeck, with sunbeds, lounges and tables, a fold-out terrace in the saloon, a balcony that can be used even when the yacht is under way, and a large beach club that joins to the tender garage. The garage floods and the tender then floats out. When the tender is deployed, the garage and beach club become one big waterside lounge.

Superconero’s social opportunities are impressive. The sky deck includes a Jacuzzi, wet bar, and lounges under a hardtop, and sunbeds aft. On the deck below, owners and guests can enjoy alfresco dining, while the main-deck cockpit includes a swimming pool and generous social area.

Zuccon used a “Liberty” style on the interior that includes soft, sinuous lines on the walls as well as curved furniture and other custom interior wood decor. The designers also made full use of the 28-foot beam, both in the master suite and the saloon.

Images of the saloon resemble a mid-century modern Mad Men rendition, with the stylized look, and full-height windows for exceptional views of the water. The yacht is scheduled to be launched later this year.