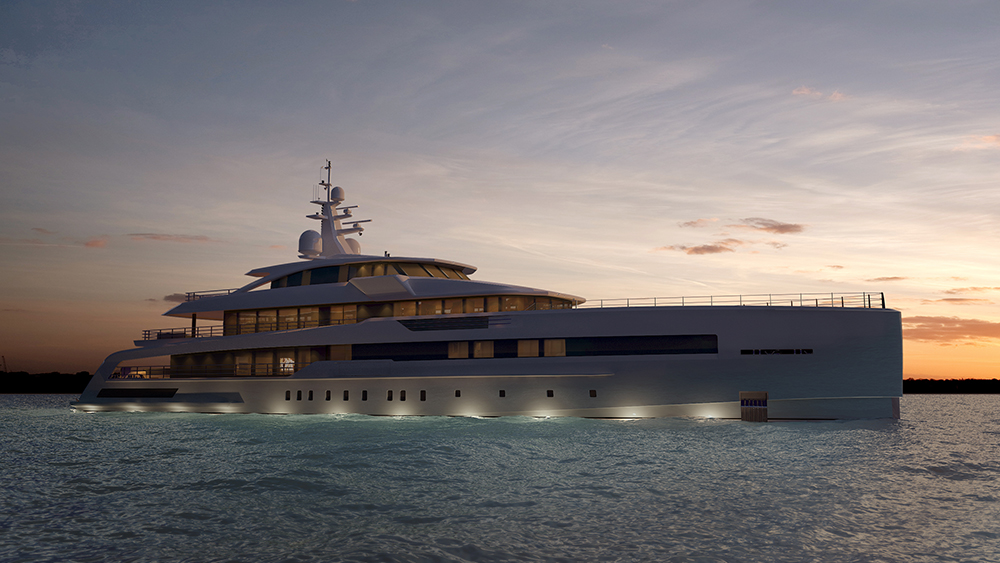 CRN’s new and unnamed 203-foot yacht “M/Y 138” breaks the mold in more ways than one. A huge double owner’s suite that can also be divided into two VIP suites provides the unusual option for two owners to share without compromising on space, location or privacy. A further six cabins on the lower deck, including a third VIP cabin, make the 138 the ultimate floating home for up to 16 guests.

Exterior designed by Omega Architects, the 138 is the first five-decked yacht that the Dutch studio has penned for CRN. It is currently being built on spec after the original owner stepped away from the project.

“Following our successful collaboration of the 73-meter Yalla and the Ocean Sport Series, our new 62-meter—a five-deck vessel—is currently being built at the facilities of CRN,” says exterior designer Frank Laupman of Omega Architects. “The iconic profile of the CRN 62-meter clearly shows it’s a member of the OceanSport series, but with its own unique character, including an elegant arch aft and superstructure design that offers protection against the elements and provides privacy on the aft-facing exterior decks.”

The aft decks were designed with privacy in mind.  Photo: Courtesy of CRN

The yacht’s five decks—comprising four decks and a sub deck that houses two cold rooms, storage facilities and the laundry—have paved the way for an “interesting layout” with “a very long superstructure”, says Laupman. An expansive beach club on the lower deck aft incorporates a music platform for both live bands and DJ sets, while a self-contained office resides on the main deck.

“We designed the OceanSport with a dropped aft deck, so it’s like it has two levels,” he explains. “The tender garage is located forward on the main deck, while the back-to-back double-owners area is located where traditionally the wheelhouse deck resides. The wheelhouse is just raised, forming an extra layer on the sundeck.”

The skylounge offers up many places to relax.  Photo: Courtesy of CRN

Designed with an explorer spirit in mind, and in keeping with the current trend for light and airy interiors that showcase a connection to the water, the 138 boasts generous-size windows that draw the outdoors in and provide great views of the sea and beyond. There is also ample space for 16 guests to dine together, both indoors (two formal options on the main deck) and alfresco (two options on the owner’s deck), with multiple lounging and relaxation areas included across all decks.

The 138’s sporty and sleek hull and superstructure—a defining feature of its profile—is now complete, and the yacht has moved to another location to commence the interior-outfitting stage. Italian designers and architects Pulina Exclusive Interiors have been tasked with conceiving the yacht’s interior. The yacht is scheduled to be delivered in 2021.