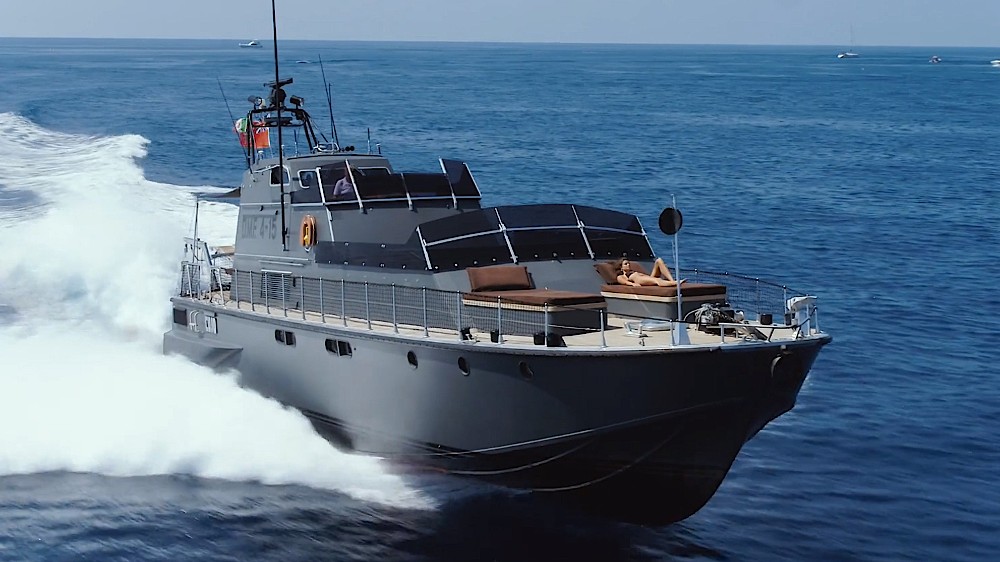 For a few brief weeks back in the summer of 1997, Cujo was the most famous boat in the world.

Not because of her intimidating military lines, or blistering 40-knot performance. It’s because Diana, Princess of Wales, hung out aboard in Saint-Tropez with the boat’s owner, and romantic partner Dodi Al-Fayed.

Countless paparazzi shots show the once future Queen of England on Cujo‘s narrow sidedecks, soaking up the Mediterranean sun. By the end of August that year, both Diana and Dodi would be dead after that fatal car wreck in Paris.

Diana, Princess of Wales and Dodi Fayed spent some of their final summer cruising around Saint-Tropez aboard Cujo.  Courtesy Patrick Bar-Nice Matin/AP Images

Yet this rakish 80-footer was a headliner long before Diana stepped on board. Her first owner was Austrian Johnny Von Neumann, an entrepreneur, playboy and passionate sports-car racer who became the largest Porsche-VW distributor in the US.

In 1972, Von Neumann commissioned the Italian shipyard Baglietto to build him a boat with one goal: It had to go fast—faster than any other motoryacht on the water. To deliver, the shipyard installed twin 54-liter V-18 turbo diesels delivering a combined 2,700 horsepower.

Flat out, Cujo—said to be an ancient Indian word meaning “unstoppable force”—could easily top 40 knots, or 46 mph. Von Neumann blasted up and down the Cote d’Azur for a few years before ordering an even faster Baglietto—this time with jet turbine power. He sold Cujo to arms dealer Adnan Khashoggi who, at the time, was reckoned to be the richest man in the world.

Khashoggi eventually passed the boat on to his nephew Dodi Al-Fayed, who immediately sent her to the CARM shipyard in Lavagna, Italy, for a full refit.

Back in Saint-Tropez, and moored in her reserved spot on the town’s main quay outside the famed Le Sénéquier restaurant, Fayed would invite many of his Hollywood friends for a cruise. During the summers, everyone from Clint Eastwood, Tony Curtis, Bruce Willis and one-time girlfriend, Brooke Shields, were seen aboard.

Following Dodi and Diana’s death, Cujo quickly fell into disrepair. Decommissioned in 1999, she was hauled out at the CARM yard and spent several years in storage.

The main salon is smaller than many contemporary 80-foot motoryachts, but few other boats its size have the same 40-knots-plus top end.  Courtesy Simon Kidston

The boat was eventually rescued by Dodi’s cousin Moody Al-Fayed, who spent over $1 million bringing her back to life. Part of the work included uprating those massive diesels to deliver 1,650 hp each.

Now fast forward to February last year. After two summers of cruising Cujo around Sardinia and Italy’s Amalfi coast, Moody decided to sell. Strangely, he entered the boat in the Retromobile classic car auction in Paris.

That’s where well-known British car collector, buyer, seller and restorer Simon Kidston appeared. Kidston had spied Cujo in the Retromobile auction catalog, read that it was being sold by his old school-friend Fayed, and decided to bid.

The 1972 Baglietto has innovative features like the amidships helm and social area, and two sunbeds on the foredeck.  Courtesy Simon Kidston

“On the day of the auction, I was tied up with clients so asked a colleague to go down and take a look. I told him that if it was going cheaply, put in a bid for a bit of fun,” Kidston tells Robb Report.

Unfortunately, just as Simon took delivery of Cujo at Lavagna, where she was moored, Europe was starting to lock down with the coronavirus pandemic.

The internal helm station is outfitted with modern electronics, but in a nod to its historic past, the wheel is definitely old school.  Courtesy Simon Kidston

But he did get to take her out during a video shoot in and around Portofino for his YouTube channel Kidston Productions, where the boat meets up with Simon’s own ’70s Lamborghini Miura supercar. Entitled A Portofino Affair, the footage of Cujo at speed is breathtaking.

“She has immense presence,” said Kidston. “No boat of its size commands that kind of attention when she comes into a harbor.” Especially an Italian harbor when nervous local boat owners think she’s with the financial police.

“As you’d expect, those engines have tons and tons of performance,” Kidston adds. “We’ve seen 41 knots. But they have a very different sound than I was expecting; instead of a roar from the exhausts, there’s this amazing whistle from the turbos.”

The diesel engines were upgraded from the original 2,700 to 3,300 horsepower.  Courtesy Simon Kidston

While Kidston and his family had planned to cruise the Med this summer, the car enthusiast received an offer he couldn’t refuse.

“A young member of a prominent Italian business family—he’s 30 years old—had seen Cujo in Lavagna, fallen in love with her and asked if she was for sale,” he says. “He took delivery last week, just in time for his birthday.”