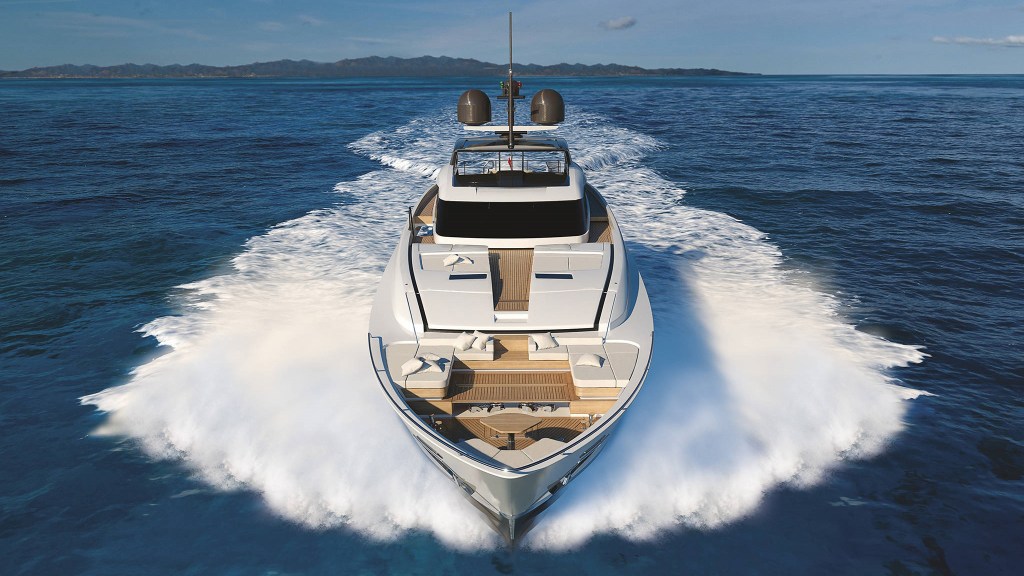 The new Custom Line 120 was launched last week at the company’s La Spezia, Italy, shipyard and will soon debut at an event near Miami, where its owner is based. The 120-foot superyacht is a new jewel in the Ferretti brand’s crown, the first of a Francesco Paszkowski–designed planing hull that is expected to reach 25 knots. The Milan-based studio worked closely with the Ferretti Group’s Strategic Product Committee to come up with a fresh design that includes both automotive and residential features, greater volumes, and a number of smart designs across the yacht.

Paszkowski is a relatively traditional yacht designer and that shows in the long, straight lines of the profile that give the 120 a decidedly masculine look. But floor-to-ceiling windows on the main deck, an elevated flybridge, and cutouts along the sides also temper the ship-like profile with contemporary touches. The design team and Ferretti’s in-house engineering department were acutely aware that aesthetics had to match the live-aboard functionality of the 120. On the bridge deck, for instance, the aft saloon was positioned higher than the pilothouse so that water views for owners and guests would not be compromised. This outer area also has a clever inside-outside arrangement, with high walls and large windows beneath the hardtop. At the rear, the Jacuzzi and four sunbeds sit in the bright sunlight. The area offers the best of outdoor living, protected but in the open air, even while the boat is running or in windy weather. A large social area on the foredeck includes a wide lounge, chairs, and even a table for two at the very point of the bow for an exceptional view.

The cockpit also has a rear table, with easy access to the upper bridge and down to the submersible swim platform. Wide passages on both sides make it easy to move around this yacht, another of its practical hallmarks.

The deck area between the cockpit and main saloon has a double-wide patio door that lifts up and outward, providing a cool, unique nether-region between indoors and out that is unlike any other yacht. Ferretti’s engineers also made sure to maximize the headroom across the main saloon and master suite, making best use not only of the picture windows but the yacht’s 25-foot-wide beam. Both areas seem palatial. There are also four generous guest suites on the deck below, with crew quarters for eight forward.

While this may not be the most glitzy statistic, it’s important to note that the boat has six bathrooms (including two his-and-her in the master suite) for guests and four for the crew. Beautiful as this yacht is, that kind of smart planning is really what enhances daily living on this new series.

The new 120 yacht should leave Custom Line’s La Spezia shipyard at the end of this month after it is fully completed, and will be at its new home in Miami by late January.