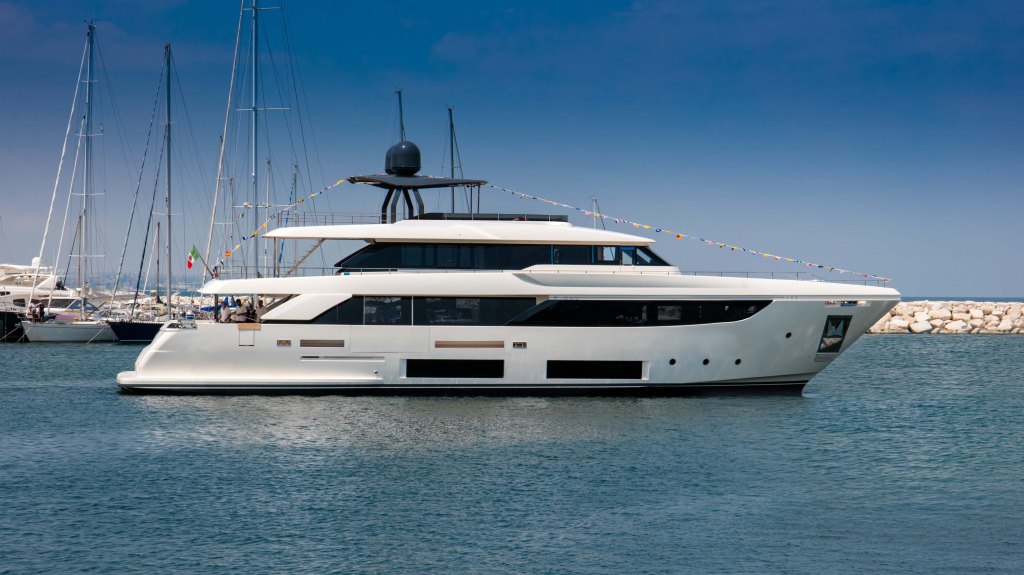 Custom Line’s new Navetta 33 superyacht will make its public debut in July at an event for owners called “Midsummer Dream” in Ibiza. The 108-foot Navetta, an Italian word for a specific class of bluewater cruising yachts, is the second of Custom Line’s new series. The Ferretti company launched the 121-foot Navetta 37 last year, with plans to introduce the new 138-foot Navetta 42 next year.

The design team, which included Piero Ferrari of the famed sports-car dynasty, Studio Zuccon International Project, and Ferretti’s in-house engineering group, came up with an entirely new vision for its Navetta series. Navettas have traditionally looked like oversized trawlers, built for covering long distances at a slow pace, but not so much for beauty. Custom Line’s take, however, is a fresh rewrite that will most likely prompt other builders to follow. Studio Zuccon mated a sleek, almost stately, hull to a bulbous bow beneath the water’s surface that delivers exceptional seakeeping and fuel efficiency, with a projected range of 2,000 nautical miles.

The 33’s four decks allow the owners and their eight guests to roam the yacht in comfort. The sundeck has sunbeds and a swimming pool, while below the aft deck offers alfresco dining at a table for 10, along with sofas for another 10 at the rear. A saloon is connected to the aft deck through large sliding doors. The open-plan saloon on the main deck encompasses more than a third of the boat’s 110-foot length, while the master suite forward is nearly just as large. The full-beam layout of the master includes a walk-in closet, private desk, open bedroom with a vanity on one side and lounge on the other, and a full-beam bathroom forward with his-and-her sinks and toilets/bidets. There is a grandiose feeling to this master suite rarely found on other yachts in the100-plus-foot class.

Belowdecks, the four staterooms all have en-suite facilities, breaking out into three doubles and one twin. They’re all sizable and all have exceptional seaside views, thanks to the large picture windows in the hullsides. Crew quarters for four, with a separate entrance, are positioned forward of the four guest staterooms.

Despite its focus on good looks and onboard livability, the Navetta’s technical accomplishments are noteworthy. Its Dual-Mode Transom (DMT) actually drops the rear swim platform below the water, allowing the tender garage to flood and float out the tender, rather than having to hoist or manhandle it. It also creates a submersible platform if guests want easier access to the water from the now-expanded beach club area.

Guests may not notice features like the special flexible joint in the transmission lines, which absorbs shaft vibrations, or the floating floor beneath the yacht’s parquet flooring that minimizes interior noise. These engineered solutions make a significant difference to onboard living without calling attention to themselves. The Navetta 33 was so warmly received when it was announced last year, five were ordered before the first one was built. After Ibiza, the boat will be at a special Ferretti event in Monaco before the Cannes Yachting Festival. It will be on display in the Cannes and Monaco yacht shows.