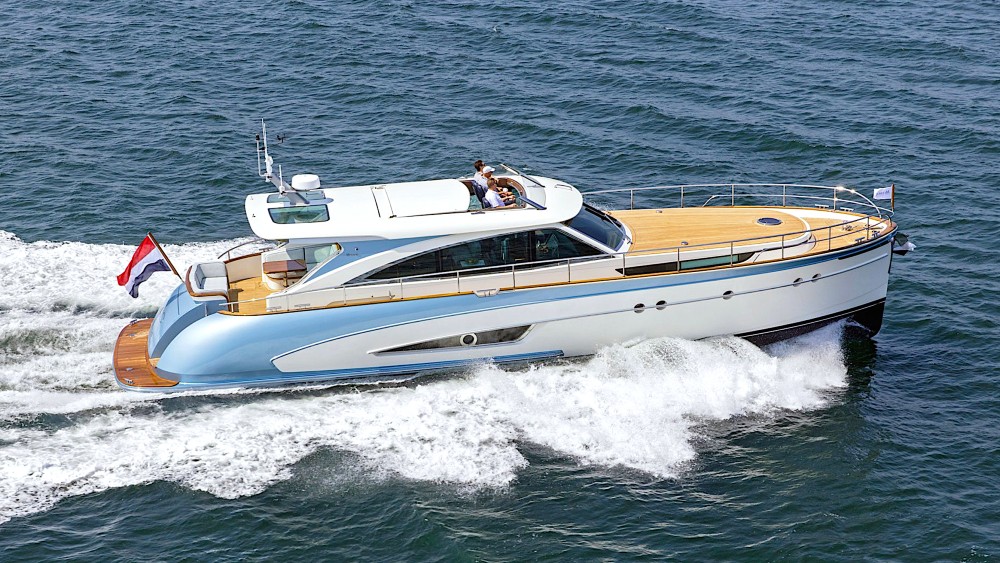 For fans of classic British sportscars, the name Healey is guaranteed to conjure up deep waves of nostalgia. Back in the ’60s, the low-slung, wire-wheeled, oh-so-pretty Austin Healey 3000 was ranked right up there with the likes of Jaguar’s E-Type and Aston Martin’s DB5.

The two-seater was the creation of passionate engineer, designer, Monte Carlo Rally winner, pilot and one-time runabout boatbuilder, Sir Donald Healey, who died in 1988 at the age of 89.

Built of lightweight aluminum by the Mulder Shipyard in the Netherlands from a design by leading Dutch naval architect Guido de Groot and an offshore hull design by Vripack, the Mulder Healey 1800 is a floating tribute to that iconic Healey 3000.

Everything from that ice-blue and white two-tone paintwork, to the curvy transom, to hull windows shaped like the two-seater’s chrome fender badge, to the raked-back, stainless-steel-framed windshield on the yacht’s roof. It’s all Healey 3000-inspired.

But it was the grandson who came up with arguably the motoryacht’s coolest Healey 3000-inspired feature: the levitating helm seats.

At the touch of a button, an oversized panel in the roof powers open. Another touch of a button and the helm seat slowly rises on a huge hydraulic pedestal. It allows Healey to steer the yacht perched behind that low, Healey-style windshield using controls mounted on the armrests.

And if he needs company “up top,” the two additional first-mate seats on the port side can also rise-up through the roof.

“The whole idea seems quite mad. But when you’re up there, sitting behind that low windscreen with the wind in your face, it feels like you’re driving a sportscar,” says Healey, who recently retired from his family-run Healeys cider-making business in England’s Cornwall.

“My wife tells me her only disappointment with the system is that there isn’t some kind of James Bond eject button to shoot me off the boat.”

Healey also says much of the decision to build the yacht was down to his wife Kay (the yacht is named MYK, short for My Kay) who became tired of her husband’s love of sailing. Seems Mrs. Healey was over “pulling-in sails” and not knowing when she was going to arrive into port.

“Our brief to the designer and naval architect was pretty simple; the boat should be capable of 20 knots, in six-foot-plus seas, and cruise in comfort from Cornwall down to the Mediterranean.”

It was also Kay who oversaw the interior design and layout of the cabins. She called for two main cabins—a forward guest, and a master suite amidships. One innovative feature of the master is the central dividing partition that can transform the space into two separate cabins for when the entire Healey family goes cruising.

As for the rest of the layout, the main salon opens out on to an oversized back deck and features deep windows to flood the space with light. One of David Healey’s “touches” was the addition of power-lowering forward side windows for extra ventilation. He also specified windows in the aft deck overhang to add light.

Steps from the salon lead down into a spacious galley, which includes a small office area so Healey can keep involved with his cider business. Throughout the entire boat, underfloor heating takes the chill out of Cornish summer nights.

Flat out, the big Volvos can punch MYK to a top speed of over 26 mph, and cruise comfortably at 23. Ease all the way back to a trawler-like 10mph and she’ll run for over 1,200 nautical miles—that’s Cornwall to Gibraltar and the gateway to the Med—between fill-ups.

Part of the yacht’s speed and rugged offshore capability is down to the patented “Slide Hull” semi-planing design by Holland’s Vripack studio. Its claim to fame includes impressive stability and a smooth ride in rough seas, coupled with low fuel consumption.

So, will there be a Healey 1800 Mark 2? According to Healey, work is already progressing on a second boat, but this time it’ll be built by the Pendennis Shipyard, in Falmouth, England, in Healey’s beloved Cornwall.

“It’s exciting to think of a Healey boat built here in Cornwall,” he says. “I’m sure that would make my grandfather proud.”

Check out images of this stunning yacht here.