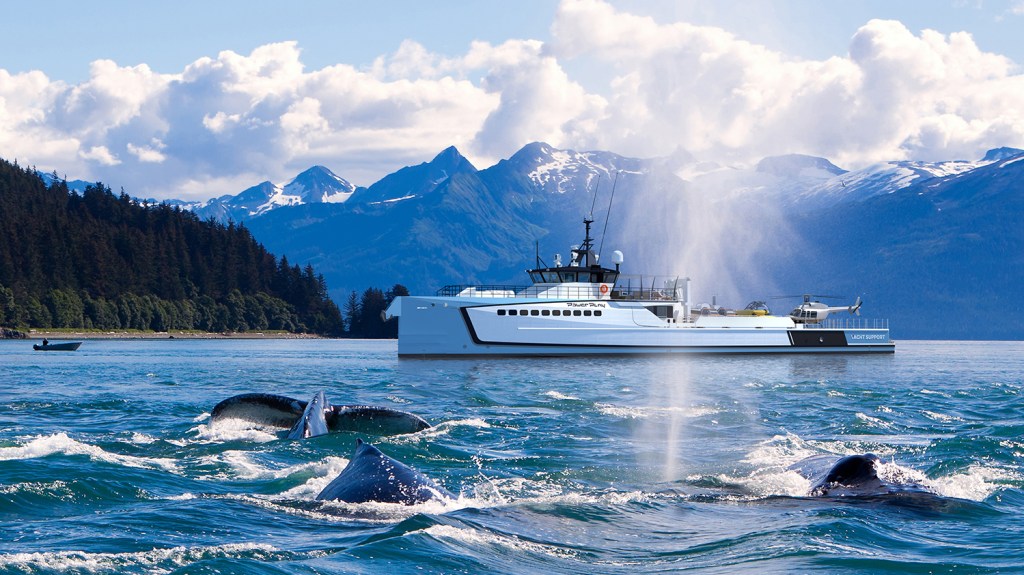 Due to be released in summer, Damen’s new Power Play is more than just a support vessel that carries tenders, toys, and extra provisions. The 182-footer is actually more of a hybrid between a shadow boat and primary yacht, with three large staterooms, a main-deck saloon, and a rear deck for guests.

The sixth of Damen’s YS-5009 series, its sisterships include Ad-Vantage, Axis, and Shadow, and like those yachts, Power Play has been configured for adventure.  It can be used for long-distance journeys as a standalone yacht, or as a support vessel for extra crew or security.

Before this collection, shadow boats tended to be refitted commercial vessels configured for carrying the owner’s toys and tenders. Damen’s idea of adding luxurious accommodations, along with the ability to carry personal submarines or aircraft, has created a new type of yacht. Think high-end boat for Jacques Cousteau, designed for an active yachtsperson who wants to explore.

“It’s not conventional thinking about luxury yachting,” says Mark Vermeulen, Damen’s product director. “Our clients have fantastic ideas for diving, aircraft, luxury toys, and serious boats. They are planning adventures of a lifetime.”

These vessels also tend to have backup systems for the engines and other critical functions because they will often be hundreds of miles offshore, out of touch for weeks. Power Play has new features like a 600-square-foot Adventure Center that allows the owners to configure the special area into a beach club or dive center.

Owners can configure this aft space as a beach club or a dive center.  Photo: Courtesy Damen

Damen also gave the boat the ability to operate in zero-discharge zones like marine sanctuaries. Power Play has a 13-ton deck crane, with A-frame fittings for launching large equipment like personal subs. Designed like a support vessel for running in rough seas, it reaches a top end of 20 knots.

The shadow boat can carry tenders and a seaplane.  Photo: Courtesy Damen