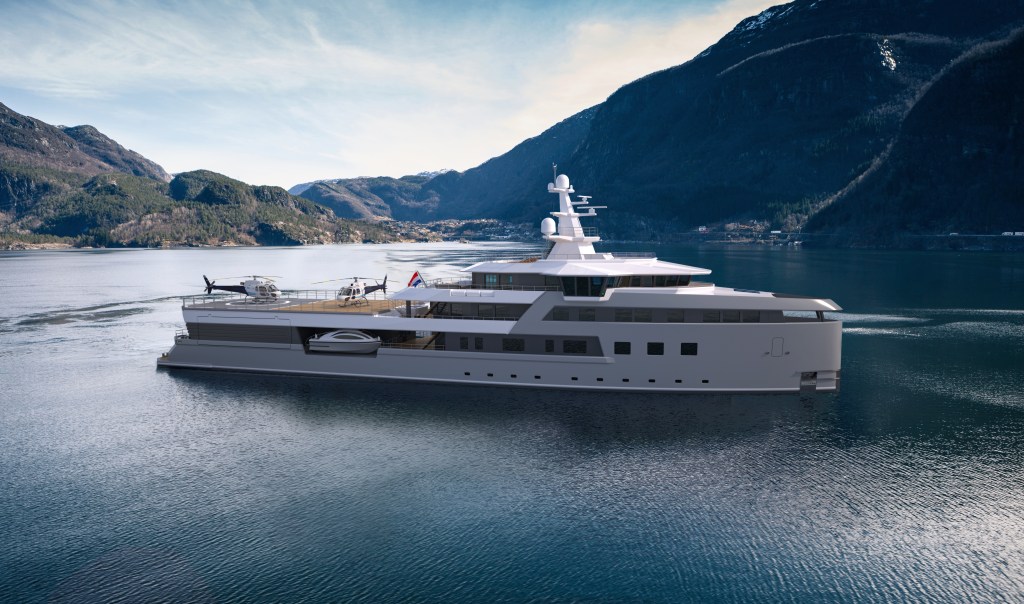 Damen has sold its second 246-foot SeaXplorer 75 model to a client who wants to tour the most remote parts of the world in self-contained luxury. The Dutch commercial ship builder is working with its famous yacht-building affiliate, Amels, to incorporate levels of refinement into the highly customized expedition yacht.

The owner will be using the yacht for pastimes as diverse as heli-skiing on virgin slopes to scuba diving in some of the world’s most unexplored waters. “They will be skiing and snowboarding on pristine slopes like Kamchatka and submersible diving and sport fishing in Papua New Guinea and the Galápagos Islands,” says Rose Damen, the yard’s commercial director. “They will be in places with no supporting infrastructure, no roads, and no heliports within range. We designed the SeaXplorer 75 to carry out such complex operations with the highest levels of safety, redundancy, and autonomy.”

The as-yet-unnamed SeaXplorer will have heliports for two helicopters as well as a hangar for the submersible. The yacht will be built in compliance with the IMO Polar Code, with enough space for food and fuel to sustain itself for long periods at sea. The Damen will accommodate 12 guests in seven suites. It also has quarters for 25 crew and expedition staff.

The SeaXplorer has a handsome, utilitarian exterior, with deck space aft for the two helicopters as well as open decks amidships for alfresco dining and other social uses. Its bow observation lounge offers exceptional water views, and for the heli-skiers, there is a changing room and gear storage area near the helipads.

The two helicopters, a primary and a backup, will have their own hangars belowdecks. Damen’s designers decided to include two helicopters because the yacht will cruise to many extremely isolated destinations, often with no accessibility to outside rescue services. If the primary helicopter ever needs backup in a tight situation, the yacht’s secondary chopper becomes the rescuer.

Beyond its ice-class hull and redundant onboard systems, the SeaXplorer 75 has many luxury features, like a wellness center, beach club adjoining the dive center, large Jacuzzi on the sundeck, three tenders (including a 38-foot motorboat), and full “toy store” of jet skis, snowmobiles, and, of course, the submersible. The owner will bring in his own designer for the interior. The boat is expected to be completed in the second half of 2020.