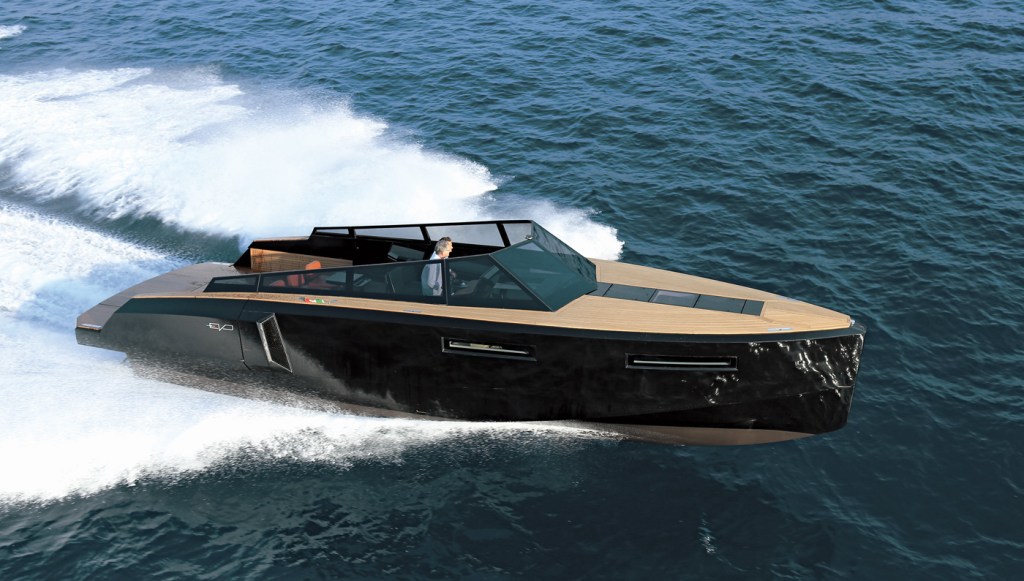 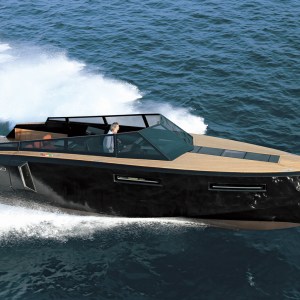 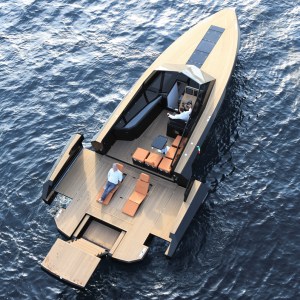 In addition to eye-catching looks, the Evo 43 features an expandable deck.

Naval engineer Valerio Rivellini is the rare yacht designer who has seen his singular concept become reality. Most dream boats never move beyond the drawing board, because they’re too wild or impractical to go into production. But Rivellini and his namesake business, Studio Tecnico Rivellini, are based in Italy (Naples, specifically), where, as the country’s automakers and fashion houses continually demonstrate, extreme designs are embraced as often as they’re dismissed. He’s also a friend of Rosario Mercuri, a co-owner of the Sea Engineering Group, which builds boats under the Blue Ice and Blu Martin brands. “I was on a sailboat two summers ago and was talking to Rosario about how nice it would be to double the space on the boat,” recalls Rivellini. “That was the starting point. We decided to create a completely innovative boat at the cutting edge of design and technology.”

The boat that he designed and the Sea Engineering Group built is the Evo 43, which features an expandable cockpit. The concept is not entirely novel: The Wider 42, an Italian-built express cruiser that launched five years ago, also has a cockpit that expands—amidships, where sections of the hull and deck on both sides of the boat slide outward. The Evo 43’s cockpit expands in a similar fashion, but near the stern. The expansion, which can be engaged through a smartphone or tablet app, increases the deck space by 40 percent to 270 square feet. “We decided to put the expanding deck sections at the rear of the boat, rather than in the center,” says Rivellini. “After all, that’s where all the fun happens.”

The deck does more than just expand. At the stern, a section rises up and out and provides a stairway to a high dock. Alternatively, it can drop into the water to serve as a swim platform with steps leading up to the deck.

The Evo 43, which sleeps four below deck, has a base price of about $600,000. The boat was a sensation during its debut at the Cannes Yachting Festival in September­—for its looks as well as its shape-shifting feature. The 43-footer combines retro design elements with contemporary ones: a vertical bow and teak deck with a black hull and a tinted, wedge-shaped windshield.

“I grew up watching Star Wars and Batman,” says Rivellini. “I love stealth jets and Lamborghini cars. I heard the Evo 43 called ‘Darth Vader’s boat’ many times, so I imagine all those things inspired me on some level.”