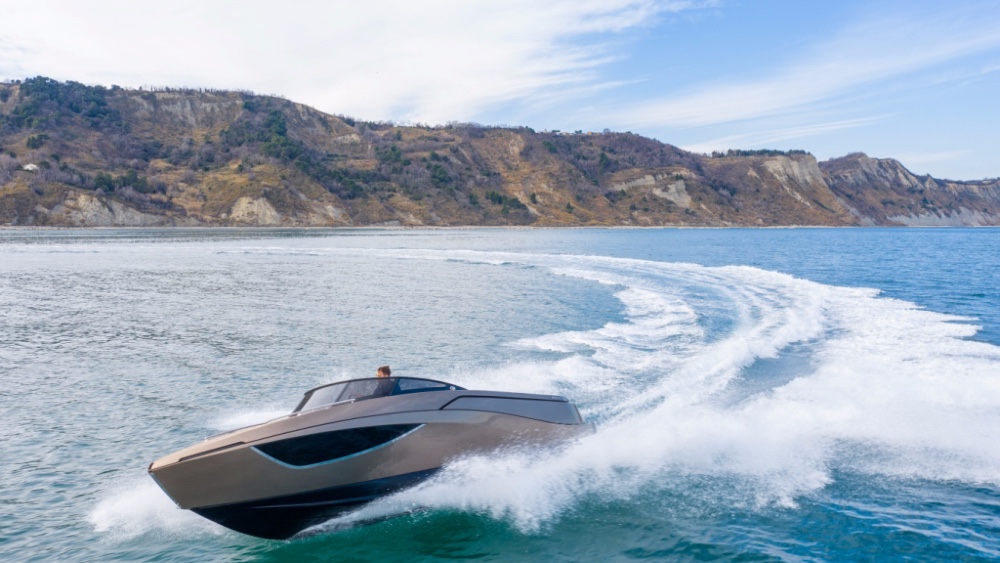 All Images Courtesy of Nerea

Only a pocket yacht from Italy could be named after a sea nymph. Yet, the Nerea 24 is much more than a stylish day cruiser. The design is smart, functional and pleasing to the eye.

The term “day cruiser” sounds like an oxymoron, but the category has become popular among owners in the last five years. Unlike the ‘80s and ‘90s, today’s boaters don’t necessarily want a big, fuel-guzzling cruiser for overnighting. Many prefer smaller day cruisers that still offer creature comforts and cabins, but without the size.

The Nerea 24 manages to combine the aesthetics and luxuries of a top-end cruiser with the fast hull and small interior of a day boat.

The Nerea 24 can be customized to suit any owner’s tastes, offering multiple colors, materials and leathers.

“I thought this size could offer the market a triple purpose,” says Dario Messina, who launched the brand last year. “There are many owners of villas on the ocean or on lakes that have small docks where they can moor these boats. On the other hand, the 8-ft. two-inch beam allows the boat to be trailered, so owners can move it around to different waters.”

Its third purpose is, as the quality fit-and-finish suggests, a superyacht tender. “We designed the 24 to have the same high-end look as a superyacht, with the same level of quality and a superior finish,” says Messina. “We also deliberately gave it a low profile so it could easily enter a superyacht garage.”

The yacht itself is a collaboration between Messina and naval architects Alessio Battistini and Davide Bernardini of ideaITALIA Design Studios. It has a compact bow, a stylish, almost 1950’s look windshield and proportionally huge cockpit to allow the owners to spread out on the rear lounge and sunning areas, or sit in the helm or companion seats. The cabin is more than a nook, given the boat’s 24-foot length, but makes a nice respite if the owners want a break from the sun or it could serve as overnight accommodations.

The oversized cockpit is the hero on this boat, allowing owners to spread out and relax in comfort.

“The goal was to have a boat that is not trendy but which kind of an eternal beauty in the lines and curves,” he says. “We’re also proud of the attention to detail in the actual craftsmanship. The goal was to create a boat that was made especially for each individual owner.”

Messina has an interesting background. He was born in Sicily and then moved north to the Italian mainland to work for Pershing Yachts, the Ferretti Group’s performance brand, for many years. There, he learned not only the boatbuilding trade but Pershing’s inimitable sense of fashion.

A lover of mythology, Messina’s primary company is Argo Marine, named after Jason and the Argonauts. The startup boat brand, Nerea, comes from Nereus and his 50 sea nymph daughters, who were part of the procession of Poseidon, Greek god of the sea. They were also helpful to sailors. “The name actually means ‘flowing on the water,’ which seemed relevant for a line of boats,” says Messina.

The pocket yacht is designed for several missions. It works as a superyacht tender, but also can be trailered for owners who want to boat in different areas.

Like the 50 sea nymphs, the Nerea 24 can be customized with the owner’s choice in multiple colors or materials, across both the interior and exterior, including the hull, flooring, and interior, using a range of fabrics, leathers, and a special finish called Oltremateria, which delivers a high-end look without allowing any degradation from sun or saltwater.

Messina is focusing on southern Europe for the growth of the brand, including two new models under 50 feet that will debut later this year. Since sea nymphs wander, so it wouldn’t be surprising to see the Nerea on American waters in the next few years.