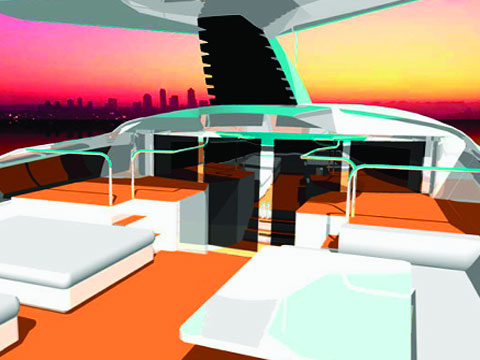 Designing a yacht is no big feat, says an architect who will remain unnamed to spare him the fury of boating professionals. “Space is space,” he says. A yacht is little more than a floating house, he argues, and hardly an architectural wonder.

Designer Luiz de Basto, whose yachts have been nominated three times for the Superyacht Society’s International Design Awards, bristles at such a suggestion. “If it was that easy, everyone would be designing yachts,” de Basto says, pausing for effect before finishing his point. “But they’re not.”

Only a handful of talented professionals are creating winning designs because, contrary to the architect’s assertion, space is not space on a yacht. It is limited and finite, with no possibility of simply adding on a wing or a room without drastic consequences. Space on a yacht is organic; the interior and exterior are dependent upon each other. Unlike a building, a yacht’s space moves and interacts with its various environments. Most important, the space within a yacht, often a home away from home for its owners, must interact with its surroundings while living up to the highest standards of luxury and artisanship. A successful yacht design—and not every design is successful—must address all of these requirements, as well as the personalities, idiosyncrasies, and wants of the owners and the designers themselves.

On occasion, these elements culminate in a way that gives a yacht special distinction, as the four vessels featured here have. Such projects stand out not only for their present-day splendor, but also because they have influenced and dramatically altered subsequent designs—and, in one case, led to the creation of an entirely new class of vessel.

Some might think that using cutting-edge technology and production techniques represents the antithesis of artistic creativity. Gary Grant believes otherwise. In the coming years, he says, the most talented designers will employ art, science, and the most advanced technology available to create their masterpieces. Adler, the 136-footer that he designed in 1999, rides that next wave of advanced yacht design.

The owner who commissioned Adler wanted virtually all of the boat’s deck-fitted equipment, including the radar antennae, personal watercraft, tender, horns, spotlights, and even the two satellite domes, to be hidden from view.

To complete this mandate without sacrificing the sweeping and elegant lines that Grant wanted for Adler was a serious challenge—one met through extensive use of computer-assisted 3-D graphics. “The graphics show exactly what the design is,” Grant explains.

Using the graphics, Grant and his team built a 1:12 model that was an exact replica of the final product. “It’s not normal for us to build a model like that,” he says, “but we’re kind of heading that way. Models are very effective tools. If you showed me some sheet music, I probably wouldn’t have a clue as to how it would actually sound, but if you play me a demo tape I’ll understand. I don’t have the expertise to go from the sheet music to the sound. Architects often use drawings and expect clients to have a level of expertise to extrapolate that they simply don’t have.”

Grant built Adler as a one-off with a mold that was cut by a computer-controlled robot instead of shaped by hand. The process is faster, less costly, and more precise. By mapping out the entire yacht on a computer, Grant had the utmost confidence in the final product because the project’s subcontractors, from cabinetmakers to metal fabricators, had only to follow specifications rather than interpret drawings. “The builders no longer have to try and make the vessel a thing of beauty,” Grant says. “They just put it all together. Making it a thing of beauty and making sure it all fits is the job of the designer. It’s my job.”

For Luiz de Basto, the inspiration for Genesis 153 came during discussions with a North American Yachts & Shipbuilding investor whose mother is confined to a wheelchair and unable to board his boat. Such a dilemma is not unusual; few if any megayachts are accessible by wheelchair—a reality that de Basto and the boatbuilder decided to change.

De Basto had never previously designed a yacht with accessibility in mind from the outset. Now he had to consider variables such as the height of sinks and light switches, forcing him to completely alter the way in which he views and designs yachts. “It’s not just a matter of making passageways wider,” de Basto says, explaining that many of the accessibility design elements of Genesis 153 are invisible to the untrained eye and hardly noticeable to a guest who is not bound to a wheelchair.

De Basto included double doors wherever possible, and he sculpted extra-wide doorways and passages to accommodate a wheelchair. Elevators go to all decks, and each car’s doors always open on the same side. The door on the side of the hull includes a ramp for wheelchair access from a pier, and an elevator platform can be lowered from the upper deck to allow seamless boarding. No longer does a handicapped passenger have to be craned aboard and then confined to a single deck.

After last year’s Fort Lauderdale International Boat Show, Genesis 153 was sold—fittingly, to a handicapped owner. In the future, de Basto believes, all of his designs will incorporate wheelchair accessibility. “When wheelchair passengers come aboard, they’re so happy,” says de Basto, who recently received a commission to build Genesis II, a boat with the same hull as the original yacht. “They can go anywhere on board safely, and those with full mobility don’t notice anything except that they’re more comfortable due to the larger doors and passageways.”

These days, Brett Bakewell-White has one simple ambition: to design the fastest racing monohull ever in an entirely new class of vessel. “We’re working in a zone outside the existing norm,” he says. “The chance to design a maxi race yacht is about as rare as being asked to design an America’s Cup yacht. It’s a career milestone that possibly only a half dozen of each generation achieve.”

The New Zealander’s goal is to design a maxi that will break the current monohull speed record of 484 nautical miles (approximately 556 land miles) in 24 hours. However, the team faces a peculiar phenomenon: the case of the ever-growing yacht. “We started with a 90-foot hull,” says Bakewell-White, “but the design quickly grew to 95 feet, where testing with an America’s Cup rig confirmed it would be better to take additional length and its associated increase in all conditions.”

The hull then stretched to 99 feet to take full advantage of the design’s potential speed and stability, becoming a form vastly different from the hull Bakewell-White first imagined. Not only did his team have to tweak the original design, but it also had to keep the weight of the boat as light as possible while stretching the hull. Bakewell-White performed extensive analyses on every design aspect, simulating every imaginable scenario to ensure maximum speed and durability. “This is a challenge and a thrill,” Bakewell-White says. “We’re privileged to be one of the few to get this opportunity. This is going to be a spectacular and special yacht, a major event in the New Zealand yachting story.”

Atlantide, a once-proud sailboat built in the 1930s, had fallen into disrepair. Located in Malta, the boat had been stripped almost bare and converted into a dive ship for scuba divers until it was purchased by an imaginative owner who turned to Ken Freivokh. He asked the designer to retrofit the hull so that he could use Atlantide as a tender for his racing schooner. The project was far from an everyday task. In fact, it seemed to Freivokh as if he were designing an entirely new vessel. “You have a greater straitjacket as a designer with a retrofit, depending on how much you retain,” Freivokh explains. “We kept virtually nothing of this. It was almost a new hull. So retrofitting this vessel was almost like doing a new design, carrying the spirit of the hull’s era.”

To further complicate the project, the hull remained in Malta for refinishing while Freivokh oversaw the design and construction of the interior and superstructure near his office in Hampshire, England. Naturally, the 1930s-era hull led to the idea of designing an Art Deco interior. Freivokh filled the interior with Lalique crystal, including an etched Lalique clock with fiber-optic lighting.

In less than a year, Freivokh and his team had designed, refurbished, and constructed an up-to-date Atlantide. The refinished hull arrived in Portsmouth almost on the same day that the interior was ready for installation. Following its 2000 launch, Atlantide won the Best Classic Motor Yacht award at the 2000 Antigua Classic Yacht Regatta. “It was a great success,” Freivokh says, and that was largely because the owner fit his notion of the ideal client. “We prefer to be guided by an owner with definite preferences and feelings for what he or she wants,” he explains. “If you have a usable brief from the owner, you can give excellent results. But it’s important for a designer to expand in a number of directions to exercise his creativity and talent. You shouldn’t just have a set template that you apply to everything.”