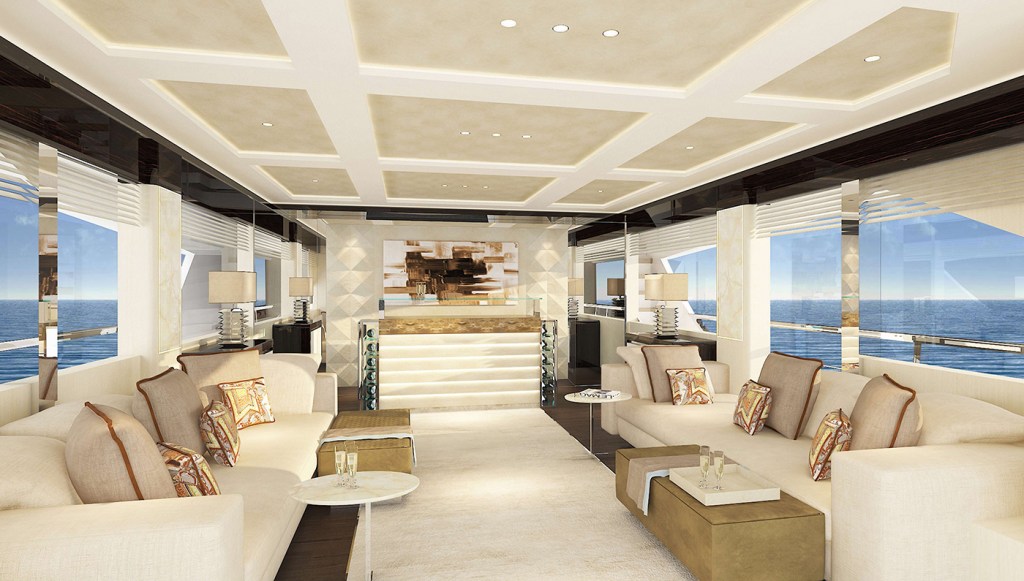 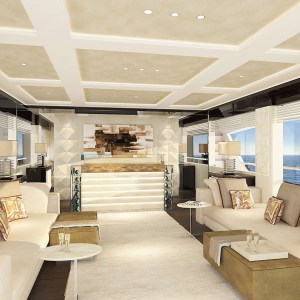 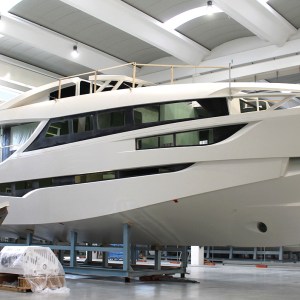 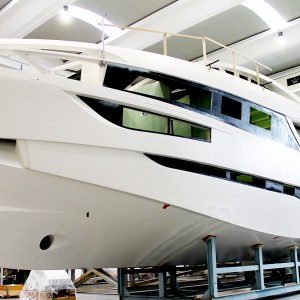 Dominator’s new Ilumen, scheduled to launch later this year, has grown by 6 feet. Two years after being announced, the 85-foot concept has expanded to 91 feet, as the Italian shipyard and her U.S. owners agreed to increase the interior volume and exterior deck space. The Ilumen 26 is now the Ilumen 28.

Even at the outset, the Ilumen promised to be a truly special yacht, a custom design that used superyacht processes in a smaller, more manageable size. Designer Alberto Mancini created a distinctive modern profile, defined by floor-to-ceiling saloon windows, a special owner’s balcony with protective overhang at the bow, and a pilothouse that is separate from the main deck.

The design team spent time with the new owners in their private villa brainstorming design ideas to ensure the Ilumen would be one of a kind. The Ilumen’s interior has a split-level master suite that would be more at home on a 125-foot yacht, with a retractable moonroof over the bedroom, forward doors to the balcony, and his and her bathrooms. The owners opted for custom-made furniture, choosing materials like backlit white onyx, ebony and zebrano wood, matte oak, silk, and nubuck leather for both visual and tactile attractiveness.

Despite its inner beauty and expansive sense of space, Ilumen’s big innovations are in its construction. Dominator approached the build like a superyacht, or even a ship, using a military knowledge and approach to do the naval architecture. The company’s head of production also spent most of his career with Benetti, the world’s largest builder of superyachts.

Concerned about weight, Dominator utilizes advanced composites and carbon fiber throughout the hull, along with vacuum-resin infusion to create the strongest, lightest-possible hull. The High Performance Hull (HPH) with its bulbous bow was designed for serious offshore running. The propulsion system is also one of a kind: twin MAN 1200 V-8 engines are connected to under-hull pods with counter-rotating propellers. The combination gives the Ilumen best-in-class fuel efficiency, as well as exceptional speed and turning abilities.

Realizing that its owners would spend weeks aboard the yacht, Dominator also incorporated Seakeeper stabilizers, to dampen roll by 80 percent when the Ilumen is at anchor, and the Humphree Active Ride system that provides an even-keeled ride in rough conditions.

At a recent press event at its yard in Fano, Italy, Dominator officials hosted a tour of the Ilumen build in progress. It was a project that many competitors said would not happen, but hull No. 3, which will be the first to touch the water, is on its way to be launched by the end of this year. And two more Ilumens are in the design and engineering stages—because of the hybrid propulsion system, they will touch the water later—getting ready for production. (dominatoryachts.com)