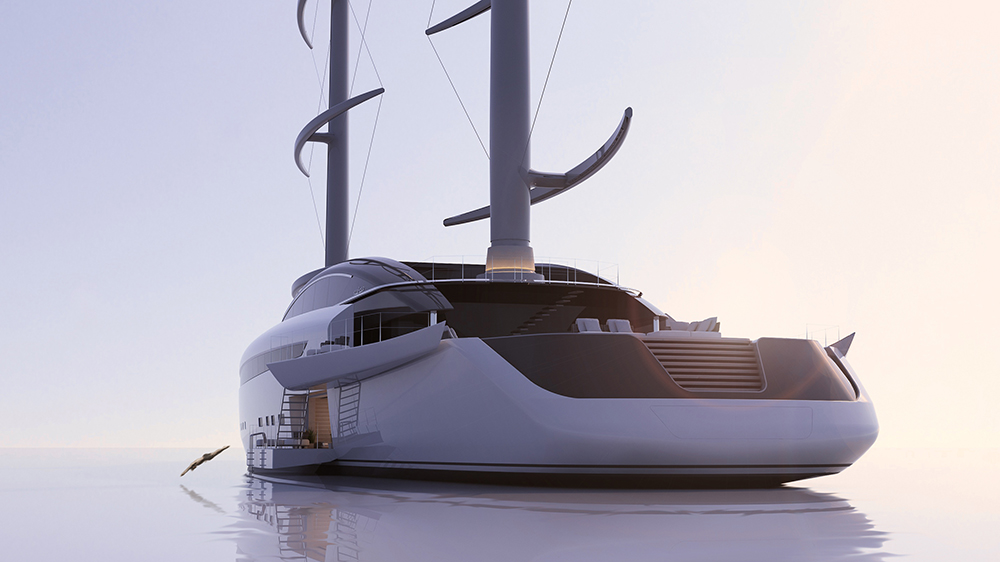 Lobanov Design’s latest concept has quite an auspicious twist.

The sailing yacht goes by the name of Double Luck, or 八八 in Mandarin. Each 八 character represents an eight, which is considered to be the luckiest number in Chinese culture. The vessel also spans, you guessed it, 88 meters (or about 289 feet).

“Our yacht is double luck for its owner,” the Spanish studio said in a statement.

Inspired by classic British GTs, Double Luck cuts a sleek silhouette with elegant curves, a smooth sheer line and a distinctive reverse bow. The superstructure has been styled as a cockpit as another nod to automotive design. The yacht is available in two different color schemes—liveries, if you will—that pair black with copper or white with yellow gold.

The interior takes cues from Zen design, with soft shapes and natural light creating a feeling of relaxation. The living quarters also echo elements of feng shui to ensure a harmonious flow between spaces outside and in. The two masts act as the center point of the vessel from which a symmetrical, balanced layout unfolds. According to the studio, the gives seafarers a sense of control that brings about relaxation and peace.

A highlight of Double Luck is the Zen garden, which has been cleverly integrated into the forward mast. Elsewhere, the yacht features a large swimming pool on the aft deck, a beach club with fold-out sea terraces and a two-deck winter garden.

Lobanov had the good fortune of working with two industry titans on Double Luck, too: Oceanco and Dykstra Naval Architects took care of the sailer’s naval architecture. The 289-footer is equipped with Dykstra’s DynaRig sailing system that was first installed on Oceanco’s inimitable 350-foot Black Pearl. In addition, the Dutch yard fitted its pioneering power regeneration system.

According to Oceanco, the highly efficient Double Luck would be capable of decreasing fossil fuel usage significantly. She would offer global cruising capability and silent sailing. On top of that, the rig can be handled by a single crew member and fully set up within six minutes. That’s quite a blessing, indeed.