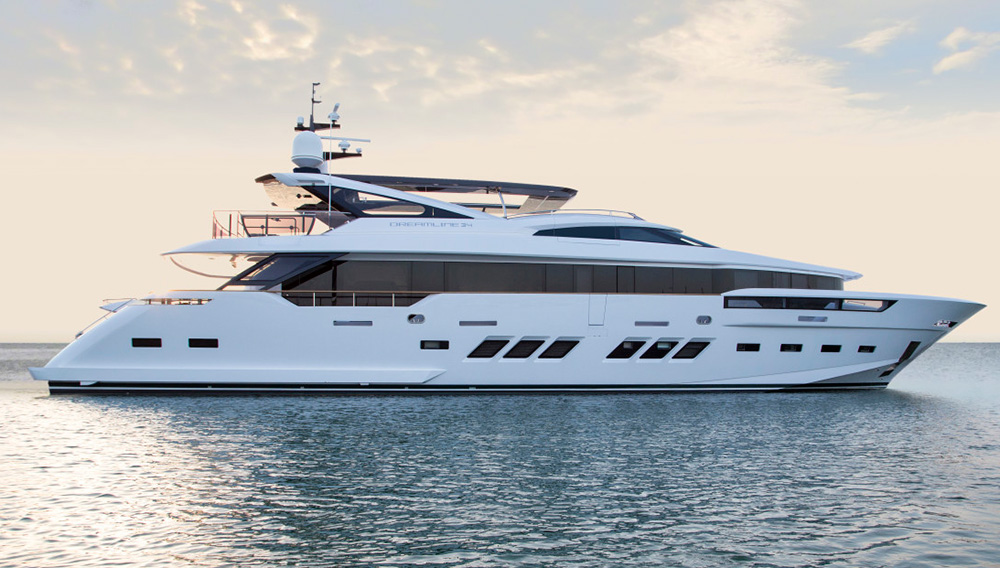 The 112-foot Dreamline 34 is truly the stuff of dreams, allowing owners to indulge their fantasies with a customizable interior and an innovative hull that reduces fuel consumption while allowing the ship to reach a top speed of 30 knots. Launched this fall, the new yacht follows last year’s successful debut of the 85-foot Dreamline 26, which immediately received six orders.

Dreamline Yachts, based in Fano, Italy, takes a bespoke approach to boatbuilding, incorporating many larger superyacht features and unusual innovations developed in house. For instance, the helm station on the 34’s flybridge can be moved to the outer edges of the yacht with its “Hydro-Commander bridge,” allowing the captain to maneuver in tight quarters with confidence. Many larger superyachts have bridge wings to provide the same steering solution, but they have never before been found on a 112-footer. The 34 possesses other smart, practical features like a passerelle with a 5-foot width that facilitates getting on and off the yacht, no matter the height of the dock. As any seasoned yacht owner knows, without a stable platform, boarding and disembarking a yacht can be like walking the plank.

Designed by Arrabito Naval Architects, the innovative hull helps the yacht consume only 19 gallons of fuel per hour at a respectable displacement speed of 12 knots, giving it a transatlantic range of 3,500 miles. Its EcoPerformance technology from Siemens Hybrid virtually eliminates both noise and vibration from the engines and generators.

Enrico Gobbi’s T4 Design conceived the elegant interior that includes a master suite on the main deck with 270-degree visibility, thanks to sweeping banks of windows. The owner’s suite also accesses its own private deck by way of an automatic sliding door that disappears into the hull sides.

Dreamline’s meticulous attention to fit and finish is perhaps best exemplified by the bathroom doors in the VIP suites. The leather-paneled doors are trimmed in the same leather as the walls and, when closed, are indistinguishable from their surroundings. When open, they slide away into the bulkheads. Engineer Peter Zuber—who oversaw both the Dreamline 34 and Dreamline 2—sees this as the ultimate blending of form and function, his goal with the Dreamline series since the beginning. (dlyachtsdreamline.com)