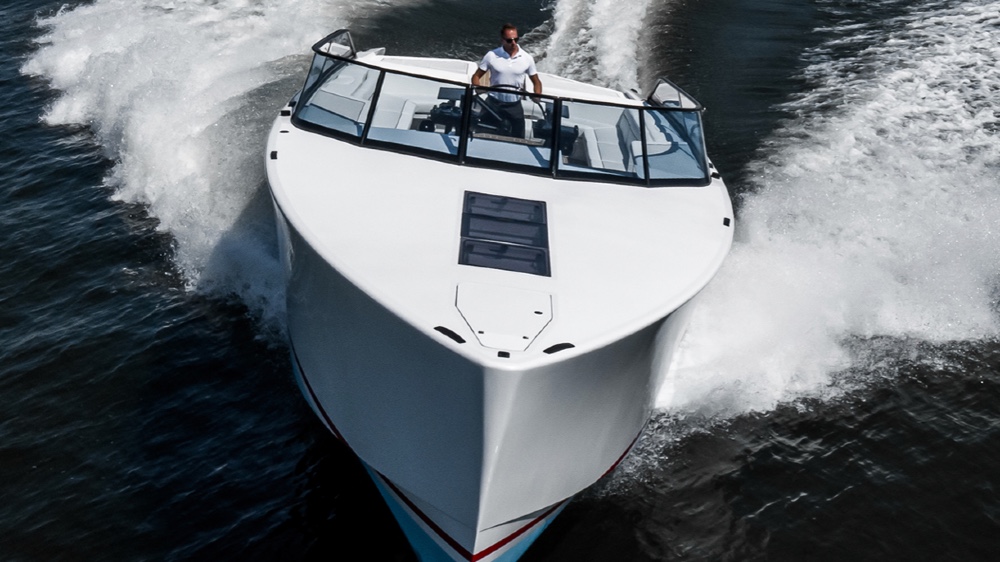 Made from lightweight, welded aluminum rather than typical composites, the boat’s slimline weight helps give it neck-snapping performance coupled with impressive fuel economy. It’s fast. Powered by a pair of 900 hp Volvo Penta IPS1200 turbo diesels, the rakish 52-footer can top out at over 57 mph.

Designed with the help of 50-year-old Prince Bernard himself, the 52 positively bristles with cool, innovative features. Take the black, center-mounted console. It boasts an oversized carbon-fiber wheel that looks more at home on a sailing yacht, and a steering pod in the shape of a “W”—after the prince’s company Waterdream. At the stern, the transom features a trio of “floating” teak steps which, at the touch of a button, raise up to reveal a tender garage big enough to hold a Jet Ski.

The motor yacht is designed to strike a stylish pose in Amsterdam’s canals, while also running 58 mph offshore.  Courtesy Vripack

Vripack describes the boat as “a lesson in minimalist expression for maximum effect.” The minimalist part is certainly seen in the lack of side decks and its large, flat, handrail-less foredeck. The absence of side passages has some benefits, including supersizing the cockpit. In addition to two oversized sunpads at the stern, L-shaped sofas are designed on each side, there’s a sofa behind the helm, and an outdoor galley.

Below decks, the boat’s 14.5-foot beam makes for roomy accommodations. In the bow there’s a convertible V-berth, while amidships there’s a pair of single berths in a cozy cabin beneath the cockpit.

In the Prince’s Instagram feed, he shows his excitement with his new toy: “First sea-trial of the Waterdream California 52. Super proud. A dream come true.” Separately he adds: “You can cruise the canals with 20 guests one day, and go waterskiing behind the next.”

The boat has a minimalist center console with an unusual placement, allowing greater freedom of movement around the cockpit, while the large, sailboat-style steering wheel lets the driver have better control at fast speeds.  Courtesy Vripack

So impressed is Prince Bernhard with the boat, he’s planning to commission more California 52s through his Loosdrecht-based Waterdream.