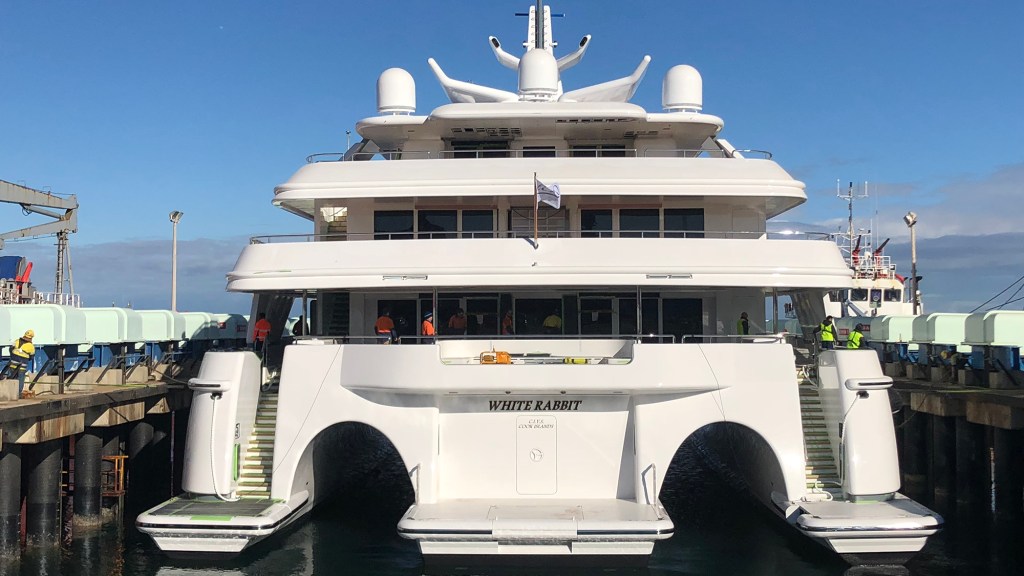 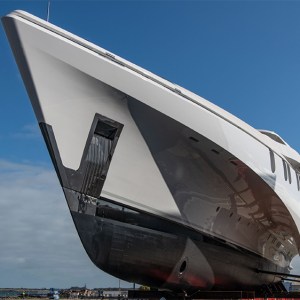 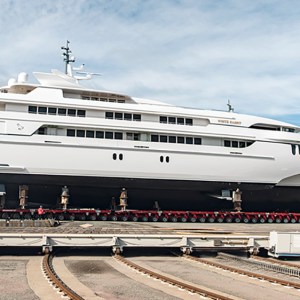 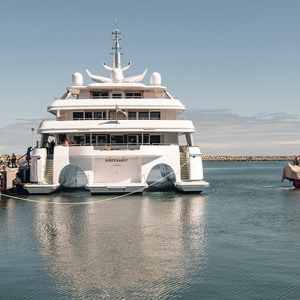 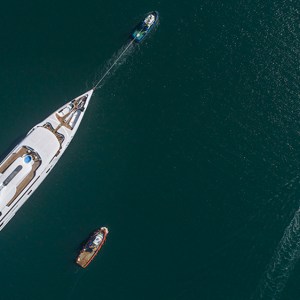 After four years of design and construction, Australia-based Echo Yachts launched the 276-foot custom superyacht White Rabbit last week. At almost 3,000 gross tons, not only is it the largest superyacht ever built in Australia (by a factor of two in terms of volume and magnitude, according to Echo’s sales and marketing and project manager Chris Blackwell), but it is also the largest trimaran (tri-hull) superyacht in the world. Oh, and it also takes the prize as the largest aluminum superyacht in the world. And they’re not done; it’s the first diesel electric superyacht to be built in Australia, as well, Blackwell says.

Sorgiovanni’s trimaran design for White Rabbit includes a 64-foot beam, which, Blackwell explains, is much larger than monohull vessels of the same length. For example, the 275-foot Feadship Savannah has a 41-foot beam, while the 279-foot Lürssen Areti boasts one of 49 feet. This extra square footage provides the owners with expansive entertaining decks and palatial interior spaces uninterrupted by walls and pillars. It also enables Echo Yachts to use the middle hull for accommodations and the port- and starboard-side hulls for the propulsion machinery, ensuring noise and vibration sources are isolated from all of the guest spaces for optimal comfort, says Blackwell.

Sorgiovanni used the additional volume to create two master staterooms, three VIP staterooms, six guest cabins, and 25 crew cabins. All told, the superyacht accommodates 22 guests (up to 30 if all berths are used) and 32 crew.

More information on the yacht’s amenities and interiors will be revealed once the yacht has successfully completed its sea trials, but Blackwell did share that a large Jacuzzi sits on the top sundeck and, in addition, White Rabbit sports a huge, three-part swim platform made up of the three hulls. The side hulls have hydraulic bridges that extend inward to reach across to the center hull, making one very large beach terrace for diving, water sports, tender operations, jet-ski tie-up—you name it. He described it as being like a marina arrangement. Plus, the center hull’s swim platform houses a hydraulic sea stair that comes up out of the deck and forms stairs and a platform that ascend up to a high dock or descend down into the water for easy in and out from the water when diving.

Designed to carry two Naiad RIB tenders (also built in Australia), White Rabbit will travel with its 167-foot catamaran shadow vessel named Charley. Echo Yachts delivered Charley in January 2017 to White Rabbit’s Singaporean owner. According to Blackwell, it has a helipad and carries a large assortment of watercraft, water-sports gear, a diving decompression chamber, and more. Charley is meant to keep White Rabbit uncluttered and focused on the cruising, luxury accommodations, and service functions.

Echo Yachts and sales and marketing/project manager Chris Blackwell will be at the Monaco Yacht Show at the end of September.