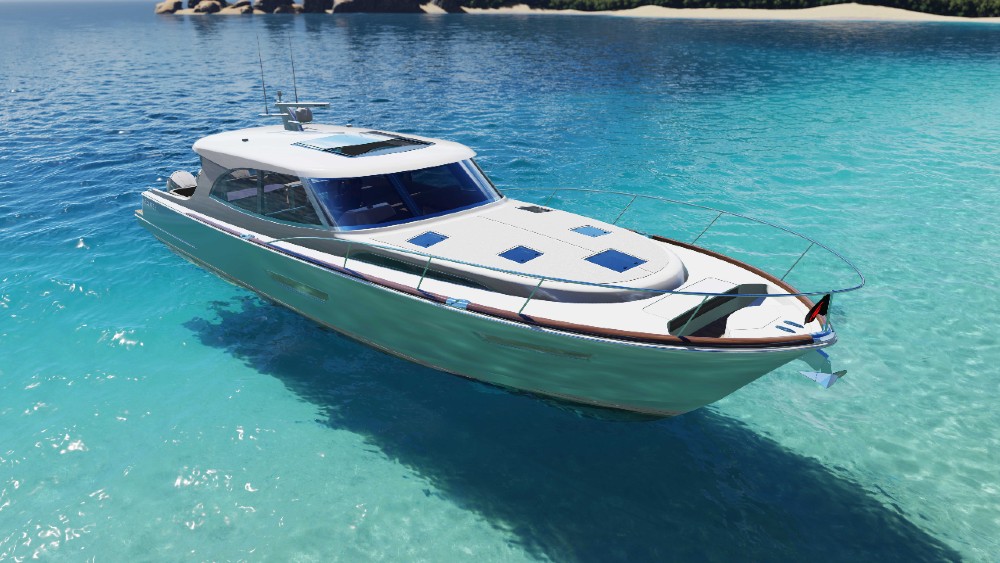 When the first Eclipse 605 hits the water just over a year from now, it’ll be the world’s largest, fastest outboard-powered express cruiser. Based on the popular New England Downeast-style design, the Eclipse will measure over 60 feet long and have four 600 hp Mercury Verado V-12 outboards hanging off its stern.

The record is currently held by the 53-foot North Carolina-built MJM 53z which comes with quad Verado 400s. And while there are a few go-fast outboard-powered center consoles that are 60-feet-plus, none have the Eclipse 605’s three beds, three heads and other luxurious appointments.

“We saw an opening in the market for a modern take on the Downeast-style express cruiser with outboard power, and created Eclipse to fill it,” Mark Delaney, CEO of Cape Town-based Two Oceans Marine, told Robb Report.

Delaney and HMY Yacht Sales, which serves as the brand’s exclusive broker, unveiled the designs, renderings and scale models of the new 605 and the 50-foot Eclipse 505 sibling, at this year’s Fort Lauderdale International Boat Show. Development work has already kicked-off at Two Oceans’ yard in South Africa, with the first boats targeting delivery by early 2024.

Part of what made both the 605 and 505 possible was last year’s introduction of the groundbreaking 600 hp Verado V-12 outboard. The Mercury’s standout features included a unique turning lower unit—the head unit doesn’t move—a two-speed automatic transmission and dual contra-rotating props. Until its arrival, no other outboard packed this much muscle.

The 605 will come standard with four V-12 Verados—and there’s even an option for five. That means speeds over 60 mph.

The other secret weapon that sets the Eclipse far apart from other Downeast yachts? Its patented SVVT stepped hull from Michael Peters. The veteran Florida-based designer’s “Stepped Vee Ventilated Tunnel” layout features steps in the hull and a central channel to increase lift, improve fuel efficiency and deliver a softer ride.

The stepped-hull design has already been used to great acclaim on the Navy’s 61-foot Combatant Craft Medium high-speed patrol boat, along with designs for Viking Yachts’ Valhalla line, Caymas Boats, and Invincible Boatworks.

Beyond the hull, the Peters team was responsible for the exterior design of both the 605 and 505.

Why a Downeast look? “We essentially wanted a pretty boat. Pure and simple. Classic above the water line, modern, fast and efficient below,” Peters told Robb Report.

The new Eclipses share a sleek pilothouse design, with huge, deep, wraparound windows, a curvy hardtop with power-back sunroof, and a low, slender, forward superstructure. Except for the big outboards, you could almost mistake it for a Palm Beach Motoryachts‘ PB55 or PB65. Or Hinckley’s gorgeous Talaria 57.

But Delaney says the big difference on the Eclipse will be more livable pilothouse space. In the 605 that translates to an oversized galley close to the rear cockpit, a dinette opposite, and steps to an elevated, U-shaped seating area with a levitating TV opposite.

Fold-back glass doors, along with a power-down window between the galley and bar, open up the entire back of the pilothouse to the outdoors. Outside in the cockpit are are a large L-shaped seating area, table with seats for eight, and a trio of stools to belly-up to the bar for sunset cocktails.

One unusual design twist is the single (instead of the usual twin) fold-down terrace. Another is the lift-up steps in the salon, which lead down into an impressively spacious food pantry and washer/dryer area.  Accommodations-wise, the 605 offers up to three cabins and three heads. Delaney says the interiors are customizable.