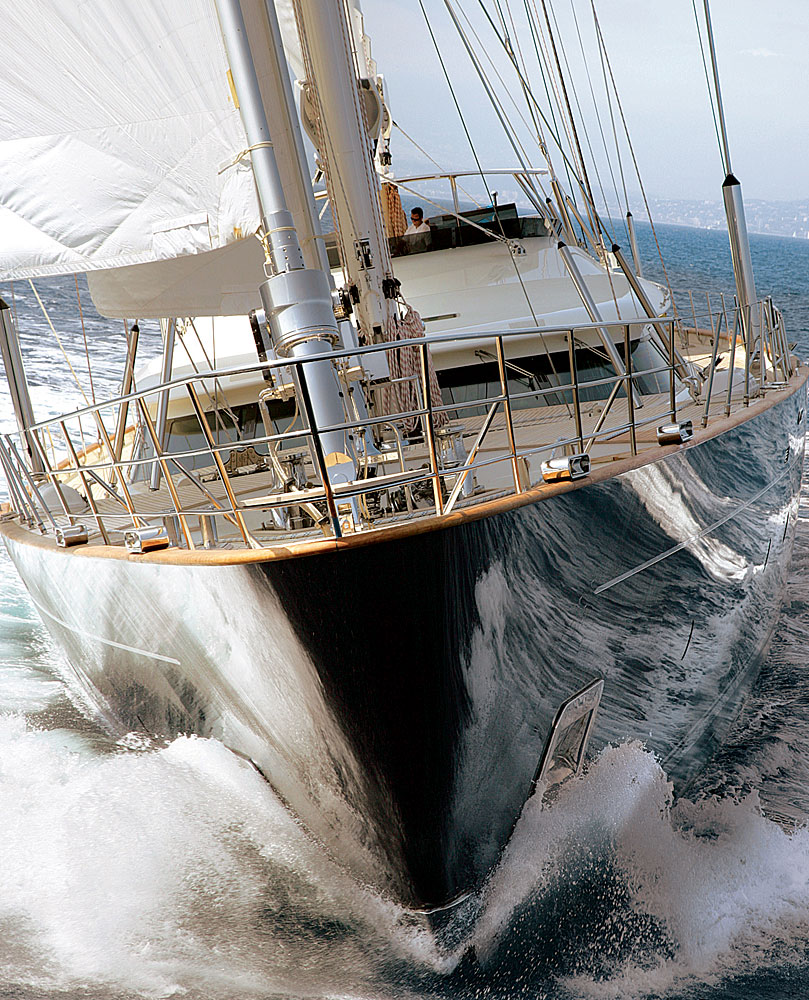 Dennis Conner, the four-time America’s Cup winner, did not laugh at my joke. Conner was in Newport, R.I., about five years ago, sailing what was essentially a scaled-down version of an America’s Cup yacht around the harbor. His crew for the day was a group of clients from the investment firm that was sponsoring his visit. As he had explained during lunch at the yacht club before setting sail, he was seeking funding from these folks for a then-upcoming (and ultimately unsuccessful) America’s Cup campaign. I was along for the ride, enjoying a perk of this job.

One by one, each passenger took a turn at the helm. As a nonpaying guest, I thought it appropriate to slip to the back of the line. Conner finally turned to me, saying it was my turn. By this time we were approaching the yacht club, and so our multimillion-dollar vessel was snaking its way through a maze of other multimillion-dollar vessels. I never before had helmed a yacht, and after considering the potential for a disaster that would include sending the skipper’s benefactors into the drink, I determined that this was not the time to begin. I responded to Conner’s invitation with a quip from a comedian who, in the delivery room, had been asked to cut his son’s umbilical cord: “Isn’t there someone here more qualified than me to do this?”

British author Peter Nichols was perfectly qualified to sail his 27-foot wooden boat, Toad, solo from England to Maine, an experience he recounted in his 1997 book Sea Change: Alone Across the Atlantic in a Wooden Boat. Nichols and his wife had spent years voyaging across the Atlantic, up and down America’s East Coast, and throughout the Caribbean, making a living by hosting charter passengers and by chauffeuring new boats to their delivery destinations. But after their divorce, Nichols’ life fell apart. “I wondered what I was doing,” he wrote, “and who I was, alone, in my thirties, now, living at home with my mother, broke and on the dole. Such thoughts flew at me like van Gogh’s dark crows between two and four o’clock in the morning, and I had no answers. Increasingly I thought of Toad.…I thought of sailing it somewhere by myself. I felt capable of this now; I knew this would make me feel better about myself.”

As noted in this issue, a fashion or jewelry designer also can turn to the sea for a pick-me-up. The ocean’s inspirational power is apparent in this season’s menswear, with its nautical motifs (“All Decked Out,” page 96), and in the latest high-jewelry collection from Van Cleef & Arpels (“Making Waves,” page 122). The Paris jewelry house calls the collection L’Atlantide, after the city Atlantis, which, according to a rumor Plato started in 360 BC, was claimed by the sea.

Atlantis serves also as a blueprint for the Neptune Memorial Reef, which the Neptune Society cremation service is building three miles off the coast of Key Biscayne, Fla. The reef lies 50 feet below the surface, and two 8-foot-tall gates and a pair of 2,000-pound concrete lions mark its entrance. The Miami Herald described the reef, after its initial phase of construction, as “a half-acre network of concrete and bronze columns and statues that doubles as a haven for fish and a graveyard for people.” Those columns and statues contain the cremated remains of the Neptune Society’s clients. When completed in seven or eight years, the reef will cover more than 16 acres and accommodate more than 125,000 customers.

“Each Memorial Day, I don’t envision this as being any different from the cemetery,” Neptune Society president Jerry Norman told the Herald. “People will scatter flowers, do their own observance, then maybe dive or just go fishing.”

Such pursuits were far from Peter Nichols’ thoughts as he attempted to cross the Atlantic alone. About 800 miles east of the Maine coastline, Toad sprang a leak that ultimately forced Nichols to abandon the craft and hitch a ride with a cargo ship to Texas. Wrote Nichols, “Gallons of water pouring without letup into an old boat bouncing around in the middle of the ocean without a proper life raft undermines your confidence.”

An excerpt from Nichols’ Sea Change is one of the 12 tales featured in the new book Near Death on the High Seas: True Stories of Disaster and Survival. In the preface to the anthology, editor Cecil Kuhne notes that each of the stories’ authors possesses “a great love of and deep respect for the power of the sea.” From that respect derives a healthy fear of ending up, prematurely and by chance rather than choice, like the residents of the Neptune Memorial Reef, with the ocean floor as a final resting place. “It’s not warm and cozy at all aboard the boat now,” Nichols wrote in reference to the seawater seeping through Toad’s hull, “but wet and loud and [expletive] terrifying.”

A sinking sailboat was not at that moment, nor—as Dennis Conner’s glare informed me that afternoon on Newport Harbor—is it ever, a laughing matter.