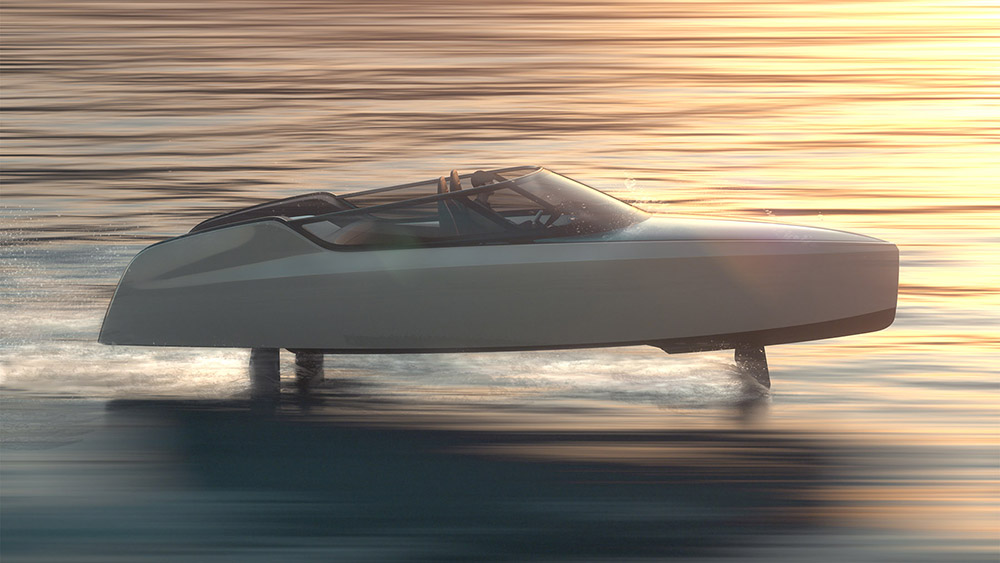 Edorado likes its boats fast—really fast. It’s only fitting, then, that the fledgling Dutch outfit’s new powerboat can fly over the waves at breakneck speeds, just like an airplane.

The futuristic 27.5-footer, christened the Edorado 8S, pairs retractable hydrofoils with a battery-electric drivetrain that together allow it to glide quickly and silently sans emissions or wake. Think of it as a go-fast boat that’s as tranquil (and sustainable) as a classic sloop.

The 8S is the brainchild of Edorado’s co-founders Giel Groothuis and Godert van Hardenbroek, who spent many years refining the design with the aim of disrupting the powerboat market.

The powerboat’s transom folds down to form a swim platform with a built-in ladder.  Edorado

“What is considered innovation in the boating industry just doesn’t cut it anymore in the current reality of the climate crisis,” Groothuis said in a statement. “Our goal with the Edorado 8S is to chart a course for clean powerboating.”

With a beam of 8.2 feet, the svelte speedster features a carbon-fiber hull and weighs 4,300 pounds. It is equipped with two hydrofoils that lift the hull out of water when traveling at speed. Once “flying”, the automatic control system adjusts each wing’s angle up to 100 times per second for added safety and stability. Edorado claims foiling reduces drag by at least 60 percent; as a result, the 8S expends less energy than a traditional planing yacht and thus offers greater range and performance.

Speaking of performance, the vessel is fitted with two 50 kW motors and an 80 kWh battery pack that enables a top speed of 38 knots and a range of 40 nautical miles when traveling at 25 knots. That’s easily enough grunt for most day trips. The 8S also has the ability to fully retract the foils into the hull for docking or low-speed cruising in shallow waters.

The 8S can reach 38 knots at full tilt.  Edorado

As to be expected, the interior of the 8S is also at the bleeding edge. Front and center, the dashboard boasts three 15-inch touchscreens that give you access to important data and a little entertainment if desired. Naturally, the operating system also runs over-the-air software updates to ensure it stays current.

The powerboat offers a good dose of luxury, too. The upscale cockpit sports integrated mood lighting, a Bluetooth sound system and even a built-in picnic set with a wine cooler. To the aft, there’s a sun pad for lounging and a swim platform with a built-in ladder for the requisite dips. Edorado says there is also plenty of storage onboard for water toys and other essentials.

The “Launch Edition” of the Edorado 8S is exclusively available to select buyers, while pre-orders of the standard Edorado 8S model can now be made globally. The zero-emissions powerboat will set you back roughly $414,000 at the current exchange rate (€350,000)–but, hey, just think of the money you’ll save on fuel.