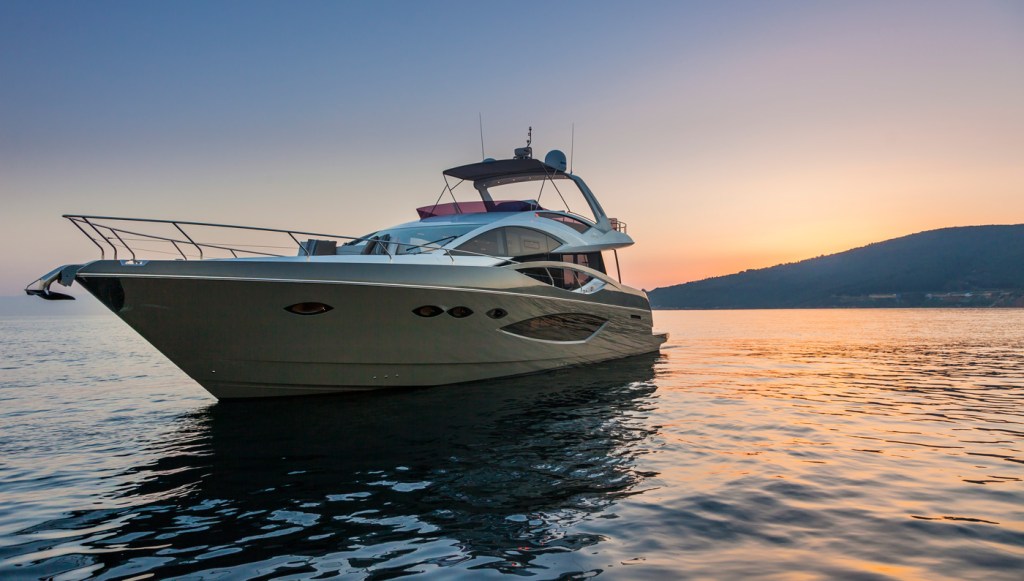 The Numarine 70 Flybridge, launched last September at the Cannes Yachting Festival, is one of the new breed of European motor yachts that feels significantly longer than its actual length. The Turkish shipyard’s sense of style is right on par with its competitors, with even a tad more aggressiveness reflected in the exterior design, exemplified by the long, sleek forefoot; the expansive, angular windows in both the saloon and hull sides; and the radar arch, raked forward.

The flybridge is proportioned with the rest of the yacht so the profile looks seamless. Thanks to the yacht’s clever arrangement, Numarine was able to squeeze every inch of available space from the top deck. A large sunbed is positioned forward of the upper helm, with a long L-shaped lounge and table just behind. The large, open area in the rear is designed to carry tenders, but it can be used for social gatherings when the tender is in the water. The foredeck provides a separate lounge for a smaller group or a couple.

The big-boat feel continues throughout the interior. Numarine did a fine job with the saloon’s design that feels like it should be in a boat 10 feet longer. Large windows wrap 360 degrees around the room, bathing the space with natural light. The oak joinery and white headliners, as well as the omission of transverse bulkheads that would limit one’s vision, accentuate the sense of space.

The open galley is placed left and forward, an unusual position that offers a nice change from traditional mid-saloon locations. With the dining table and lounge across from the galley’s island counter, the focus of enjoying meals is shifted forward. The rear portion of the saloon is designed for socializing, with L-shaped lounges on either side. Splitting these activities makes sense because the social area is connected to the exterior cockpit and, with the doors open, the joined areas would be an ideal for a large party.

Belowdecks, the full-beam master suite is positioned amidships. Numarine devoted the lion’s share of space to this master, furnished with a queen-size bed in the center; a large lounge to the starboard; and a dresser and a vanity to port. To the rear is a walk-in closet on the starboard and a large bathroom with its own walk-in shower on the port side. A VIP suite at the bow also feels unusually spacious, appointed with its own en suite bathroom. There are two other staterooms, a double and a single, between the master and VIP. Numarine designed the new 70 so that a cruising couple could manage its operation but can accommodate two crew members at the transom if they prefer. (numarine.com)