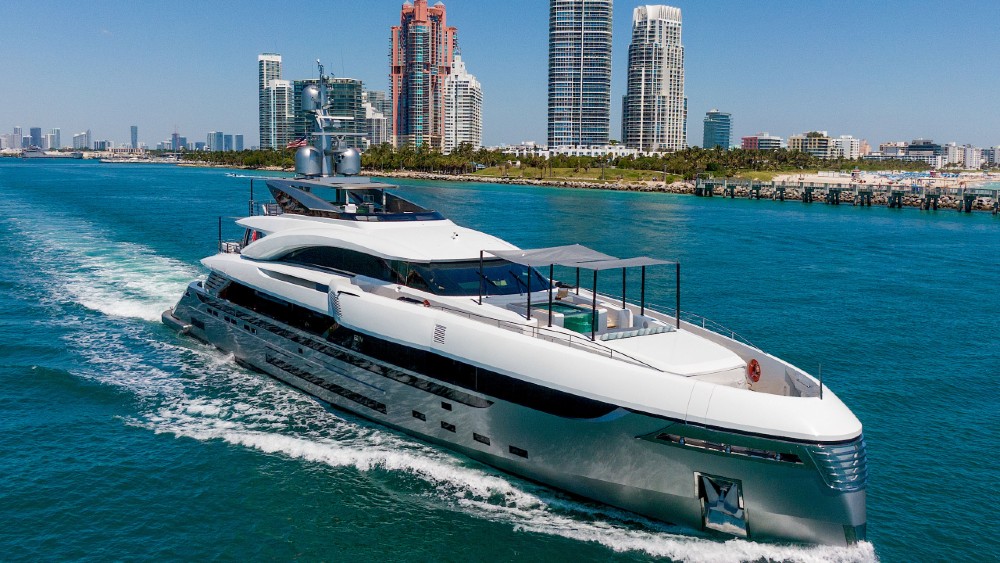 Oversized stainless-steel front grille. Check. Raked-back windshield. Yes. A swoopy, coupe-like roofline. For sure. And 5,200 horsepower “under the hood.” But of course. We could be talking about some exotic Italian supercar here. No, make that hypercar.

But this is the 160-foot superyacht EIV from Italian superyacht builder Rossinavi that looks as sleek and sexy as any Lamborghini, Ferrari or Bugatti.

“Actually, the inspiration was more Bentley, because of the focus on quality, craftsmanship and fine materials inside the yacht,” Dean Anthony, the owner’s rep and project manager with Florida-based Allied Marine tells Robb Report.

Anthony is giving us a tour of this metallic-silver speed machine during the recent Palm Beach International Boat Show, where it was one of the undisputed stars of the event.

The “inspiration” he talks about came out of a joint effort between a detail-focused, Florida-based owner and superyacht designer Enrico Gobbi and his Venice-based studio Team for Design.

While the yacht takes many of its styling cues from one of Gobbi’s other recent designs—the 206-foot Utopia IV, built by Rossinavi for Market America founder JR Ridinger—it’s that bow-mounted stainless grille that really sets EIV apart.

The design team made use of a neutral color palette and plenty of glass to define the interior.  Courtesy Bernard Dino Bonomo

Mounted on a flattened upper section of the yacht’s reverse-angled bow, it has raised stainless strips to mimic the bars of a supercar grille. It’s also flanked by long stainless panels with openings for line-handling that, viewed head-on, look like the slender headlights of a Bugatti Chiron.

“The owner is really proud of the design. He’s been known to ask the crew to moor bow-first in a marina slip, rather than traditional stern-to, just so he can see it as he walks towards the yacht,” says Anthony.

Launched at Rossinavi’s Viareggio yard in 2020, EIV—or E4, as this is the owner’s fourth yacht—took over two years for the concept to be finalized and another two to build. Constructed of aluminum, the fast displacement hull is the work of Italian Arrabito Naval Architects.

Step aboard on to the articulating swim platform, and a huge fold-down panel reveals the beach club. It’s all comfy chairs, mirrored walls, with a steam room and plunge-pool close by. A clamshell door on the port side opens to offload a small armada of paddleboards, kayaks and a couple of Sea-Doos.

Integrated stairs lead up to the lower aft deck with its vast U-shaped sofas and well-stocked bar. Full-width windows with a central glass door open into the main salon and dining room with its neutral palette of whites, silvers and creams.

Blending in with the Miami skyline.  Courtesy Bernard Dino Bonomo

Like the exterior, the interior is the work of Enrico Gobbi, who filled the spaces with classy fabrics and furnishings from Hermès, Rubelli, Loro Piana and Armani/Casa.

Instead of a formal dining room, EIV’s eating space is part of the main salon and features drop-down balconies on either side to open-up the area to cross breezes. A concealed door leads in to the professional-grade kitchen that, according to Anthony, was laid-out by a Michelin-starred chef.

The yacht’s sprawling main suite is also on this main level and, in addition to having his-and-her bathrooms, huge closets, and a fold-out balcony, is home to the owner’s private 300-bottle wine collection. Housed in three, glass-fronted chillers—one for reds, one for whites, the other for Champagne—the room includes a high-tech massaging chair to soothe while you sip.

A muted main suite with a side area for relaxation.  Courtesy Bernard Dino Bonomo

Below decks are four more cabins with en-suites for eight guests, with features like lighted onyx sinks, marble floors and brass fixtures.

“The design brief for the interior was for it to have the look, feel and style of some of the six-star hotels and spas the owner has enjoyed over the years,” says Anthony.

And as with any great spa, EIV has two pools to choose from. The larger of the two is a 12-by-6 foot pool secreted away on the top deck. It can be filled with either fresh or salt water, features a glass waterfall, and for exercise, a push of a button creates a resistance flow.

EIV also a has a party-boat vibe, easily fitting into the Miami scene where it occasionally hangs out. At night, its flashy, multicolored neon lighting, advanced sound system, and drop-down, 100-inch projector screen for the occasional Saturday Night Fever movie showing, all keep the party going.

Since being launched, EIV has cruised Western Med hotspots, like the Amalfi Coast and Capri, and zipped across the Atlantic to winter in St. Barths, and the Bahamas. In the coming weeks, the boat will be heading back to the Med for the summer season.

The yacht is now on the market with Allied Marine for $40.4 million.