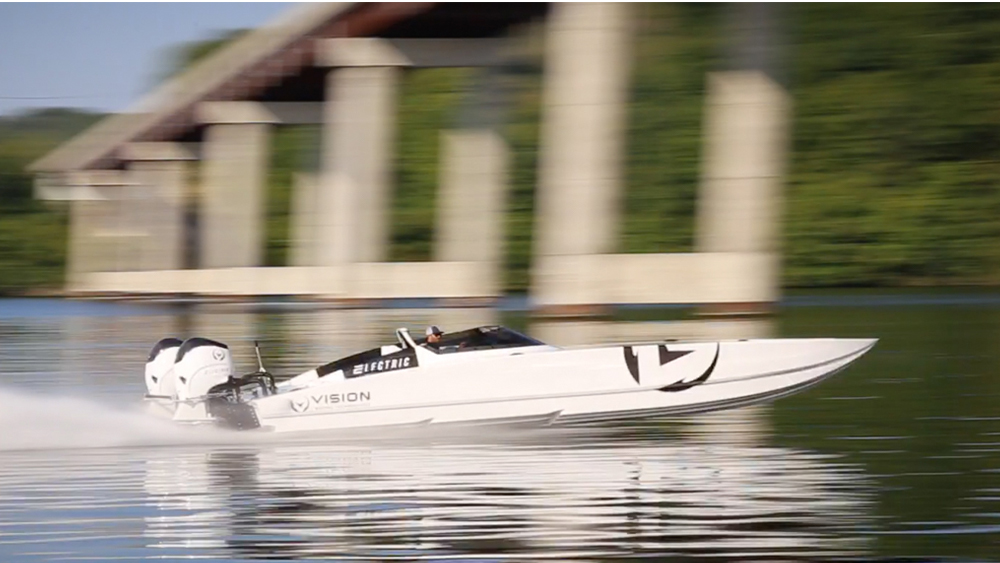 Ten years ago, electric boats were mostly tiny barges that puttered for an hour around the marina. In the last year, they’ve moved fairly aggressively into the sportboat world, with dozens of new brands boasting speeds in the 30- to 50-mph range.

Earlier this week, a 32-ft. power catamaran blew past a crowd of thousands at 109 mph. That not only gave electric boats a spot in the high performance record books, but shattered the notion that battery-powered vessels are all slow boats to China.

Shaun Torrente at the helm of the Hellkat electric cat.  Courtesy Vision Marine

The run took place at the annual Lake of the Ozarks Shootout, a bragging-rights event in go-fast circles, that attracts 100,000 spectators along with dozens of high-performance racers attempting to set new speed records. Each boat runs the three-quarter-mile course for a shot at glory.

On its first attempt, the V32 hit 104 mph but reached an even faster 109 mph on the second run. It shattered the previous 88-mph record set by Jaguar with its Vector V20E back in 2008. Torrente called the event “an amazing experience to push the boundaries of what people thought was impossible.”

“We wanted to show the world that electric power is not your granddad’s electric trawler doing three miles an hour,” Bruce Nurse, director of business development for Vision Marine Technologies, told Robb Report. “It’s not a golf cart.”

The catamaran hull was a smarter, faster design than a monohull for breaking the speed record.  Courtesy Vision Marine

The speed record, while impressive, may have been more about showcasing the E-Motion brand, since running a boat at that speed for a prolonged period would instantly drain the batteries.

Still, it was an interesting exercise that shows electric’s clean-power potential in a go-fast world that most people still associate with the ’80s— “Miami Vice” Don Johnson, drug-runners, gold chains and smelly, loud engines.

Vision worked closely with HellKat on creating a catamaran that could accommodate its electric motors and battery packs, paying attention to weight distribution, and the constant banging that high-performance boats endure, while squeezing every possible mph from the boat and motors for the record attempt.

The unsung hero for the record run was Vision Marine’s E-Motion outboard, developed in partnership with Octillion Power Systems. Vision says it’s the first 180hp outboard designed with a propulsion package that includes throttle control and monitor to enhance efficiency, speed, and of course, the all-important range.

When the outboard runs at peak power—like crossing the 100-mph-plus line—horsepower output increases to 225. The team chose a multihull over a monohull because it has less wetted surface and will therefore run faster. One of the big obstacles for the record attempt, and boating in general, was finding batteries that could fit into the 32-foot boat.

“Most electric vehicles use lithium-ion batteries, which are wide and long,” says Nurse. “We tried with batteries from a Swiss car company early on, but they were too large. We ended up designing our own stackable 700V battery banks that fit into the hulls of multiple boat types.”

The company’s electric outboards will be appearing on different 2023 models from Groupe Beneteau, including its Four Winns H2 sportboat. “Depending on the number of people in the boat, you could probably reach anywhere between 40 and 60 mph,” says Nurse regarding the new Four Winns. But if you want any kind of range, Vision’s literature notes the boat will need to cruise at a sedate 20 mph to squeeze out 60 nautical miles before having to recharge.

Of course, speed is highly addictive and records equal bragging rights. Nurse is already eyeing up next year’s Shootout with the aim of beating this year’s record. “The purpose of this race is to showcase the power, speed and torque off the line of electric boats,” says Nurse. “We want people to know that the option is out there for a fast boat, with 90 percent less maintenance, zero carbon emissions and noiseless cruising.”

But until battery capacity improves, don’t expect to run at 100 mph for very long.