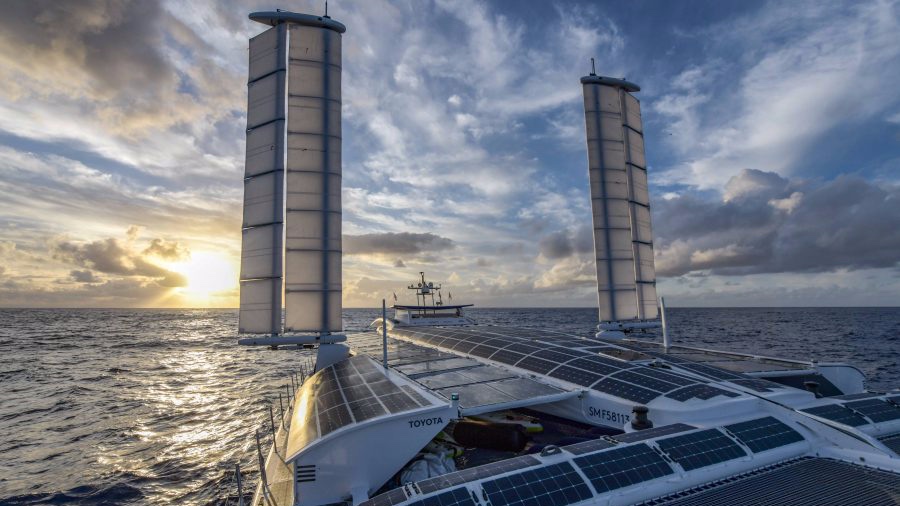 The Energy Observer, a converted ocean-racing catamaran that runs on a hydrogen fuel cell and solar power, recently completed its first 5,000-nautical mile transatlantic voyage from Brittany, France, to the Cape Verde Islands in Africa to Martinique in the Caribbean. The five-person crew also made the trip during the Covid-19 lockdown, so she ran in virtual isolation, unable to stop at any ports along the way for the sake of the crew’s health. Perhaps most importantly, she accomplished the voyage with zero carbon emissions.

The 100-ft. catamaran was designed to prove that it could run with no fossil fuel. It’s a high-tech yacht with a central energy management system that coordinates energy production and transmission from its solar panels, wind turbines and hydrogen fuel cell. The goal is to be able to run these systems at different times, so the boat performs at top efficiency. Three years after being launched, Energy Observer has traveled 23,305 miles, and visited 25 countries.

This transatlantic voyage, however, was a special one since it is the first time it was using a new hydrogen fuel cell developed by Toyota for the project. The fuel cell converts seawater to hydrogen to power the boat.

It also has two “Ocean Wings” or 40-ft. vertical-axis wind turbines that serve as fixed, rotating sails to produce energy while the yacht is running, while also giving Energy Observer greater acceleration. Its photovoltaic panels convert and store solar power during the day. Using the advanced software developed by Rockwell, the EMS figures out when to recharge the fuel cell and when to run the electric motors, so the yacht is always operating in top form.

This voyage involved testing the potential of all the systems in tough ocean conditions in a near-empty seaway. During the trip from the Canaries to Martinique, Energy Observer only passed two vessels—a cargo ship and the transatlantic rower, Stéphane Brogniart.

Energy Observer stopped twice—in the Canaries and Cape Verde—but the crew remained on board to avoid any possibility of being contaminated with the coronavirus. “There was no possibility of any technical pit-stops due to the general lockdown,” says Victorien Erussard, captain and founder.

The boat passed only two vessels during its final leg, including the transatlantic rower, Stéphane Brogniart.  Energy Observer

The voyage itself involved multiple challenges. From France to the Canaries the yacht faced head winds, so much of the 1,500-mile voyage involved closed-haul operations in rough seas. During most of this leg, the Ocean Wings fed the electric motors and Energy Observer’s special propellers, resulting in a 30-percent gain in average speed.

From the Canaries to Cape Verde, the boat experienced easier downwind conditions, which allowed the crew to channel all the solar energy into propulsion for speed, and at night, the fuel cell kicked in. Erussard says the Toyota system started in seconds, supplying the floating micro-grid with “precious kilowatts.”

Because of the length and isolation, the journey was arguably Energy Observer’s most challenging, but it also proved the value of combining fossil-fuel-free energy systems. The success of the Toyota fuel cell also shows it’s possible for different types of vessels.

The Toyota fuel cell, which converts raw seawater to hydrogen, provided much of the nighttime power during the voyage.  Energy Observer

“Crossing the Atlantic with this floating laboratory sends a powerful message to the decision-makers as it demonstrates the supreme reliability and resilience of our low-carbon systems,”says Erussard. “We can and must switch energy models. Massive investment for economic recovery is needed to enable us to build a whole new world, which no longer involves fossil fuels.”