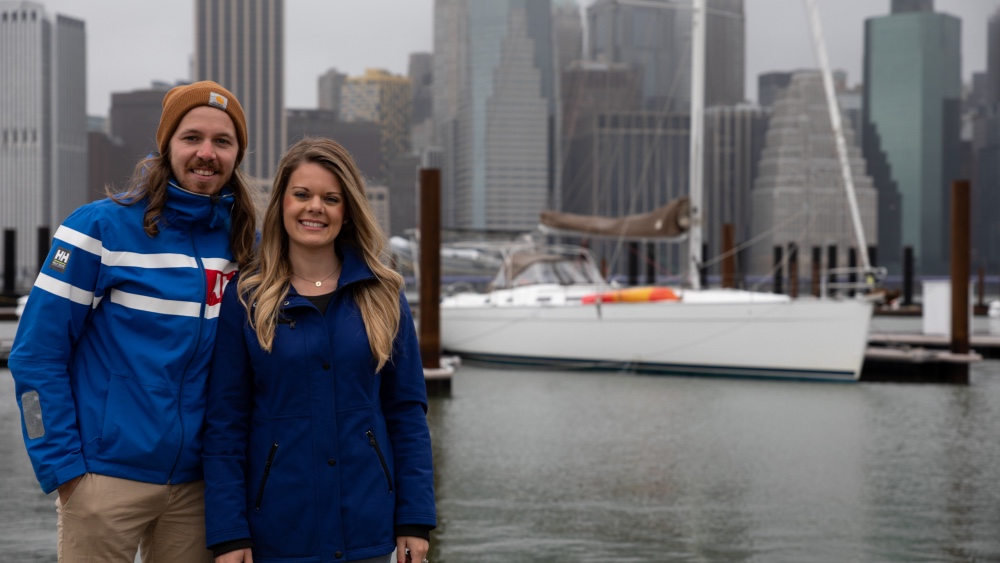 Sailing a 50-foot sloop nonstop for 34 hours up a wild, wintery Atlantic coast, from the Chesapeake Bay to New York Harbor might not sound like the most idyllic cruise for a young, married couple—especially heading into the epicenter of a fast-exploding COVID-19 pandemic. For Rachel and Taylor Hartley, that was the whole point.

Rachel, 26, has been a nurse for five years. She spent the first two working in intensive care but had been working in surgical pre-ops at a hospital in Lynchburg, Virginia, when in early March, her hospital began to cancel any operation that wasn’t urgent. For weeks, not a day went by when she wasn’t called, emailed or texted by one of the nurse staffing companies looking for people with intensive-care experience for coronavirus centers like New York.

Rachel Hartley is one of thousands of nurses and other health-care professionals who have come to New York to work during the COVID-19 pandemic.  Taylor Hartley

There was such a need, Rachel realized, and she wasn’t putting her skills to use in Virginia. “My true bread and butter is critical care,” she tells Robb Report. “I knew I wanted to be in New York, in the thick of it, because that’s where help is needed the most. It was eating at me, and I knew I had to go.”

Taylor, also 26, who works as a landscape photographer and college recruiter, was game for sailing Turning Points, their 2007 Beneteau Cyclades, from its home port in Hampton, Virginia, up through the Chesapeake Bay and along the mid-Atlantic coast to New York. Rachel reached out to Tom Huling, her former nursing colleague in Columbus, Ohio, to encourage him to join them.

Tom is a triple-threat as a nurse, paramedic and firefighter. He knew Rachel but had spent very little time with Taylor. “She called me up and was like, ‘What are you doing for the next two months? Do you want to come to New York?’” recalls Tom, 28.

New York City had the country’s highest concentration of COVID-19 infections during March and April.  Adobe

The three would have to leave immediately, sailing the yacht up the coast and living aboard for two months.

Rachel and Tom are among thousands of out-of-town medical professionals who have come to New York to relieve staff in local hospitals, at a point when the city seemed like it was at a breaking point. When they arrived on Easter Sunday, Covid-19 rates were spiking—there were nearly 900 new admissions in New York hospitals just that day. The ICU units were overwhelmed.

Their nonstop passage—including sailing through two long nights—felt like a religious quest to them. They left just before midnight on Good Friday and Taylor recalls that, as they neared New York on Easter morning, the sky was so clear they could see the Manhattan skyline 40 miles away. “When we were coming around Sandy Hook, we had a host of dolphins hanging out near the boat,” he says. They took it as a good sign.

“They were coming out of the woodwork, coming out of retirement to go work in New York,” says a health-care recruiter about nurses that relocated to the city for two-month assignments.  Adobe

They dropped their sails as they slid into New York Harbor, passed the Statue of Liberty, and motored into ONE*15 Marina in Brooklyn Heights, overlooking Lower Manhattan. But the marina was empty.

Turning Points was the only boat among the new marina’s hundred empty slips, but the group was far from alone. Local sailor Carla Murphy had posted a plea to the 1,700-member Facebook group Sailors of New York: Rachel introduced herself as an ICU nurse who was coming “to work on the Covid frontlines,” and looking for guidance. Within an hour, the recently opened marina had donated dockage for two months (normally more than $11,000). The marina restaurant is also feeding the Turning Points crew, thanks to a GoFundMe campaign for first responders and frontline workers like Rachel and Tom. (The marina has provided 4,000 meals to date.) Other sailors in the community quickly donated support and offered to help with boat repairs.

“The boating community is incredible,” says Taylor. “The only requirement is that you own a boat. And they treat you like siblings.”

When “Turning Points” arrived to Brooklyn on Easter Sunday, it was the only boat in the marina.  Taylor Hartley

Rachel and Tom are both treating COVID-19 patients at NYU Langone’s hospital campus in the Sunset Park area of Brooklyn, but on opposite 12-hour shifts. Rachel works nights and Tom works days. Rachel minces no words about the job: “It’s the hardest working environment I’ve ever been in,” she says.

Tom concurs. “I’m used to working with trauma patients in gangs or who might be involved with drug violence, or people just doing stupid things,” he says, adding, “I was taking care of the local mailman the other day. He was a normal guy living a normal life. That’s been the hardest part: People who have a lot of great things going for them getting this sick.”

The permanent medical staff, Rachel says, “are so exhausted and worn out.” She has met about 50 nurses who have traveled to the city from Pennsylvania, Indiana, Tennessee, Georgia, Texas, Hawaii and California. “It was what I expected, maybe even worse,” she adds. Sobering is a word she uses more than once. “I can’t count how many code blues and rapid responses.” At one point in her first days, there were “three big morgue trucks outside the hospital.”

After sobering shifts in the intensive-care unit, the boat has become a sanctuary for Rachel.  Taylor Hartley

What has surprised her most is how many of her patients are young and otherwise healthy people—her generation even—who are now “all intubated, sedated, and chemically paralyzed.” She adds that the mortality rate—”seeing so many people die”—has been one of the hardest parts of the job.

Still, even with the long shifts in the intensive care units, Rachel and Tom have remained positive. She notes that their hospital has been able to discharge hundreds of patients who were Covid-positive, “so that is a great thing to rejoice about.”

The three boatmates are following strict hygiene protocols and Rachel’s former work colleagues in Virginia donated a lot of PPE materials. But if anyone in the group falls ill, the sick party will have to isolate in tight quarters. As Taylor says: “We will send food down the hatch.”

Since the crew of “Turning Points” arrived in New York, they have been helped by a community of local boaters.  Adobe

Turning Points is a sanctuary for Rachel and Tom after so many gut-wrenching days in the hospital. As captain, Taylor says, “I am most excited about being able to support them” and to do whatever it takes “to provide a nice set-up for them to come home to.” He’s become the chef in chief. “When I’m off my shift, Taylor has some gourmet meal all whipped up and then I just crash,” says Tom.

“It’s not like living in a house,” says Rachel. “This boat is more of a community that we all maintain together. We enjoy each other and the boat and the little marina community that welcomed us—even though it’s so far from our lives in Virginia.”

Seven weeks of living in confined quarters has not made anyone stir-crazy. If anything, it has brought the group closer.

“Last night, we sat outside and watched the sunset,” says Tom. “We had dinner on the back of the boat. Taylor and I got to talking and then the city skyline just lit up. It was magical. When you think about the reverse—what it’d be like to be stuck in a hotel room for eight weeks—we’re truly blessed to have this situation.”

Tom Huling, a nurse, firefighter and EMT, says his shifts in the same ICU hospital as Rachel Hartley have been eye-opening. “The hardest part has been seeing a lot of people with great things going for them getting so sick,” he says.  Taylor Hartley

None of the group minimizes the situation in New York. “We’re very glad to be here,” says Taylor. “But it’s kind of a somber gladness because we understand the urgency of it all.”

While Rachel was the first traveling nurse who suggested she “sail her way to her assignment,” says Patrick Overby, the medical recruiter who connected Rachel and Tom to NYU Langone, “there are nurses coming out of the woodwork, out of retirement, out of their small towns, to travel to the epicenter of the pandemic to help out,” he says. He likens the rush of nurses into New York City to D-Day. “I really believe this is a turning point for our generation,” he says.

Though the name came with the boat, Turning Points represents more than just a floating home for the Hartleys; they see the boat as part of a larger mission. “When we bought the boat, our motivating factor was to take our love for sailing and employ that in some way to be a service to other people,” Taylor says.

Taylor Hartley, captain of the sailboat, sees his mission as “doing whatever he can to support” Rachel and Tom after long days in the hospital. Rachel Hartley is considering signing up for another COVID-19 relief position, once her Brooklyn assignment is done in June.

Before this journey, the Hartleys had sailed Turning Points to the Florida Keys, around the Chesapeake and Delaware Bay. And while they had toyed with the idea of cruising to Martha’s Vineyard or Bermuda after the New York assignment ends in June, now, they are considering signing up for another COVID-19 relief position somewhere else along the Atlantic coast.

For Rachel, one of her favorite parts of the day is commuting by ferry to and from work. Often the lone passenger, she told me excitedly she can see the Statue of Liberty coming and going. “It just gets me amped up,” she says, “pondering the history and meaning and soaking in the inspiration, making me all the more ready to serve New York City.”