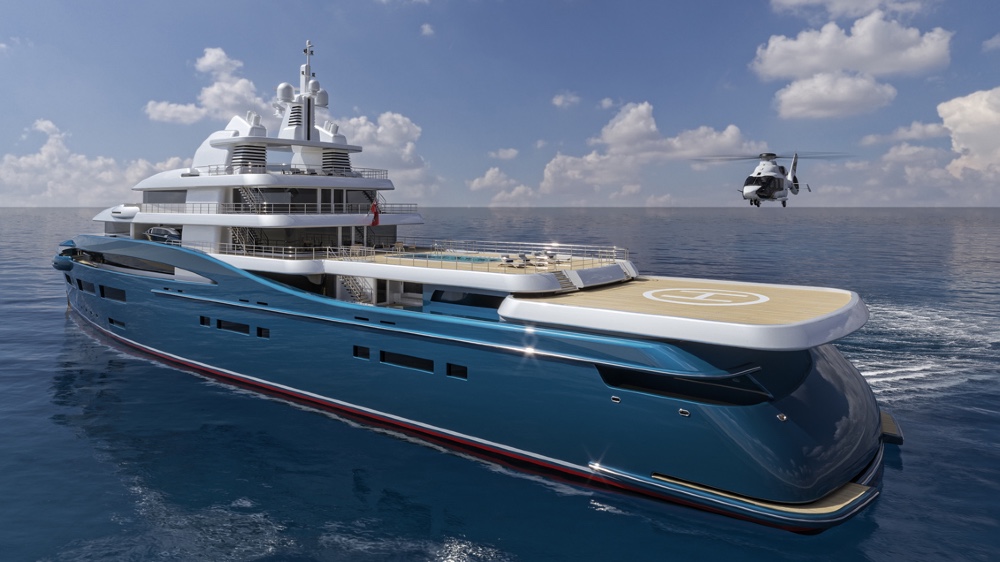 In 18th century Australia, the term “frontier” became synonymous with the territory beyond civilization, where danger and adventure simultaneously resided. It was a place where only the intrepid ventured into. Superyacht designer Sam Sorgiovanni used the definition in a similar way for his new 325-ft. concept expedition yacht, Frontier, infusing it with the soul of a true explorer.

Unlike many modern explorers that look tough but are more like paper tigers in the outback, Frontier has a reversed ice-breaker bow that allows her to travel to remote waters of the Arctic or Antarctic in comfort and safety, but still look stylish in warmer, tamer climates.

Sorgiovanni also gave Frontier white upper decks and dark teal exterior that carries through from the aft expedition end of the yacht to the owner’s and main decks. Frontier also has a unique helicopter landing platform. “Mounted on hydraulic jacks, the platform is able to slide out to receive the helicopter and then retract once the helicopter has taken off,” he told Robb Report. “When retracted, the platform serves as an extension of the pool sunbathing area aft and can be used as a dance floor or even a second gym to the primary gym, which is located aft of the bridge deck.”

The 325-ft. explorer yacht has a stylish profile but its bow is designed to be able to cut through polar ice.

Beyond exploring polar reaches, Frontier was designed for recreation in every other area of the world. She has an outdoor bar and Jacuzzi on the observation deck, a 30-ft.-long swimming pool on the owner’s deck, and two-story beach club with spa, beach club and bar.

Sorgiovanni drew inspiration from his native Australia when selecting the interior materials. The team chose natural and sustainable materials, including fast-growing woods, local stone, tree bark and even egg shells.

“Australians have a casual lifestyle that focuses on the sea, sand and climate,” he says. “This translates so well to life on a yacht—this yacht, in particular, perfectly depicts the wish of being close to the elements in a relaxed way, with a taste for discovering unknown lands.”

The held-pad slides out when the helicopter lands and takes off. With no helicopter on board, the deck can be used as a dance floor, gym or large sunbathing platform.  Sorgiovanni Designs

Frontier has accommodations for 12 guests in six double cabins and 34 crew in 17 cabins. The interior also features a cinema, dining room for 20, as well as an observation lounge on the forward section.

Still in the concept stage, Sorgiovanni expects to attract proposals from shipyards to minimize her emissions through more advanced propulsion systems as she gets closer to being built. “White Rabbit G for instance, which I designed, has a diesel-electric drive that burns approximately 40 percent less fuel than normally needed on an equivalent volume monohulled yacht,” he says, adding there are other ways to make the yacht more eco-friendly. “There are non-toxic hull antifouling coatings with non-biocide-release that protects marine life; solar panels, LED lights, and an eco-friendly dynamic positioning system for the yacht to drop anchor away from fragile coral reefs,” he says.

The designer also expects to see more explorer yachts like Frontier on the water over the next decade. “These long-range displacement vessels offer excellent sea-keeping and spacious accommodations, and they’re suitable for long periods of living onboard,” he says. “They also provide an ideal platform for modern hybrid propulsion systems.”

Many owners, Sorgiovanni says, want the best of all worlds in modern expedition yachts.  “It’s the same as a car,” he says. “Would you rather buy a four-wheel drive or a sports car? The ideal answer is both.”

Welcome to the new frontier.